The excitement over the much-anticipated African-themed superhero film, Black Panther, has reached fever pitch among African Americans and Black communities throughout the Diaspora. This is understandable, given the steady Hollywood diet of Black representations through crime-ridden “hood” films, Tyler-Perry comedies, black bougie rom-coms, self-important civil rights dramas, and more recently, the dreaded “slavery” epic. Black audiences are more than eager to whet their appetites on an Afrofuturistic vision, courtesy of the Marvel Comics universe. Featuring a diasporic all-star cast of royals, warriors, tech wizards, and fierce women, and set in a fictional African country called Wakanda, a technologically advanced nation that neither experienced the Transatlantic Slave Trade nor Western imperialism, Black Panther is the stuff of our collective dreams. Black History Month has decidedly taken a turn towards the future.

Part of this collective excitement includes the release of the Dave Meyers-directed music video for “All the Stars,” one of the songs on the movie soundtrack by rapper Kendrick Lamar, featuring the singer Sza. The visuals fit into a tradition of Pan-Africanism, an entire continent claimed by its wayward children in the New World as it collapses different geographical regions and several fashions, hairstyles, and dance expressions from cultures as diverse as Congo, South Africa, Nigeria, and Kenya. The fusion of a map of Africa with a galaxy of stars, traversed by the funky elegance of Sza, elevates the status of both region and Black womanhood.

Specifically, the video incorporates the artwork of Liberian-British artist Lina Iris Viktor, who specializes in 24-karat gold-leaf mixed media to capture both spiritual and material dimensions of Black beauty. Viktor has since spoken out about the ways her art was used without her permission – calling our attention to the power differences within the African Diaspora that privilege African American artists (backed by corporate interests) over their African counterparts. This is unfortunate, given how the the effect—svelte and slender black female bodies rendered like Nubian figures, set against a backdrop of West African symbols and designs resembling Egyptian hieroglyphs—invariably led to several commenters on its YouTube video proclaiming that “Black woman is God.”

But just as these comments were expected, also inevitable were the racist trolls who were determined to dampen this joyous spirit among Black folks, which a few did by recalling stereotypes of old – African “savagery” and poverty—and shaming Black womanhood through mention of fat, mammy-like Black women who were “missing” from the video. What strikes me about this discourse is not that white supremacists would be threatened by an image of Black beauty—and, therefore, would seek to undermine it with a counter-image—but that fat-shaming would be the go-to source for denigrating the Black body. Until these derisive remarks, it had not dawned on me that bigger Black bodies (give or take one or two men in the backdrop) were missing from this Diasporic vision of Blackness in the video.

This is much like the missing fat Black woman from Beyoncé’s Lemonade project—an absence that Ashleigh Shackelford called out when querying, “Is it really too much to…include one or two cameos from fat Black women and femmes that are not desexualized, grieving mothers? Is it really too much to see … [such women] slaying the game?” While Shackleford’s criticism was situated in the Deep-South aesthetics on which Beyoncé drew for her project, the same could be asked for this latest project in Black aesthetics, especially considering how West African traditions around fattening rituals and appreciation for curvy bodies are decidedly absent. Not that I believe—as Shackleford advocates—that big Black bodies must be essential to a Black aesthetic project. Both Lemonade and the “All the Stars” music video are equally powerful in repositioning the Black body for aesthetic appreciation. However, the troll responses to this recent video are a reminder that the “fat Black woman” exists in a dichotomy between the pride expressed over slender Nubian bodies and the shame and perceived “ugliness” that Western culture has constructed of the fat Black body—from Sara Baartman, the “Hottentot Venus,” to Mammy and Aunt Jemima. The racist commentary is a reminder that more work needs to be done to envision an aesthetic around the bigger Black female body.

Such aesthetic developments are even more urgent when we consider the history of this celebrated ideal of the East African body, held in high regard in comparison to other bodies on the continent. I am reminded of the work of German filmmaker and photographer Leni Riefenstahl, who infamously produced the Nazi propaganda film, Triumph of the Will, and whose aesthetic for the perfectly rendered body ideal and spectacles of fascistic precision appealed to Hitler’s white supremacist political vision. Frequently socializing with high-ranked Nazis, including propaganda minister Joseph Goebbels, Riefenstahl nonetheless maintained her innocence even though she was brought to trial at Nuremberg but was eventually acquitted for her propaganda film.

She would escape her contentious past and the nightmare of “civilization” by embarking on a journey to the African continent, with her camera lens in tow, in search of a simpler, more “primitive” life. As Alexandra Ludewig notes, “Riefenstahl … sought renewal and redemption, to be born again by tapping into a primordial origin. Thus the attempt to capture the noble savage” on camera.1 Riefenstahl visited Kenya in 1956 with plans to make a film, Black Cargo, concerning an internal African slave trade, and became preoccupied with finding the right body type to portray the slaves. We had already seen her visions of the perfect idealized athletic body in her film Olympia, which covered Berlin’s 1936 Olympic games and admiringly captured shots of the African American athlete Jesse Owens, who thwarted Hitler’s plans to demonstrate the superior Aryan body when he became an Olympic champion. It’s not surprising, then, that Riefenstahl would actively seek a sleek and buff Black body. She recounts being unsuccessful in finding her ideal, and after a car crash, she returned to Germany. However, it was while reading Stern magazine that she stumbled upon George Rodger’s “The Nubas of Kardofan,” depicting two buff naked dark-skinned men posing after a wrestling match. 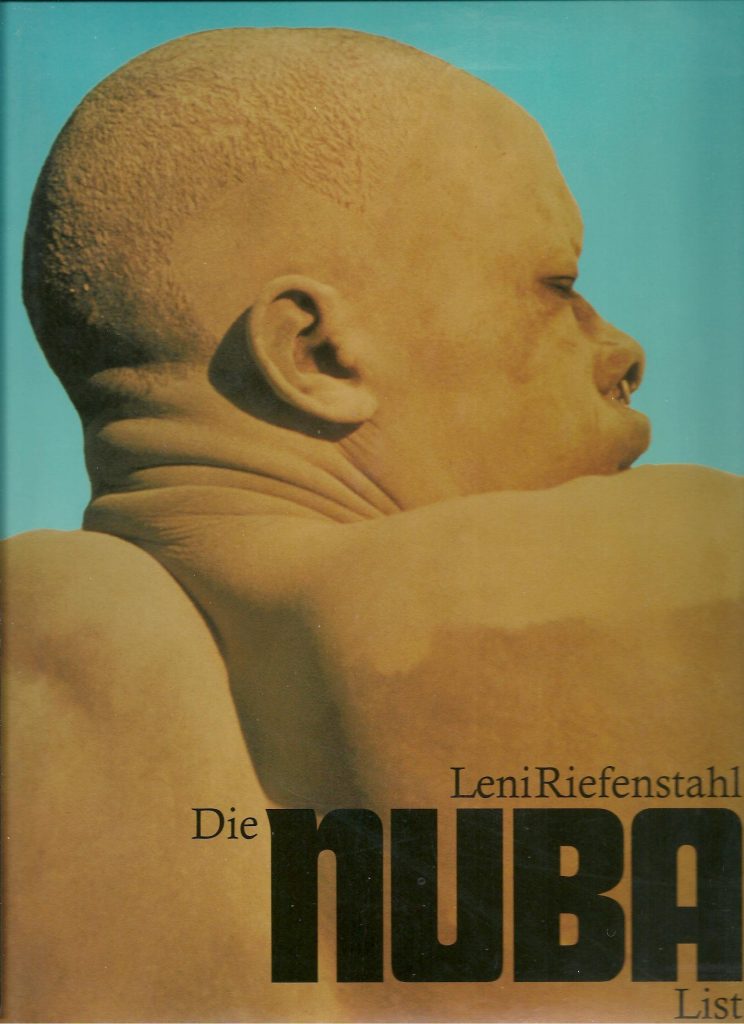 The iconic photograph propelled Riefenstahl back to Africa and to the hills of Kardofan in Sudan, where she found “her” Nuba – tall, dark, and slender. However, she wasn’t content to photograph African subjects as they appeared. She manipulated her images, implored her subjects to pose nude, and even enhanced the body through lip gloss and other artifice. The results were several popular photography books of the Nuba and other East Africans throughout the Sudan, Kenya, and Somalia, as well as safari landscapes and wildlife. She had found her idyllic “Africa” and crafted an aesthetic ideal around this Nubian body. There is no denying the sublime beauty of her photographs, which circulated globally, even leading to what George Paul Meiu calls a “Riefenstahlian aesthetic.”2 It reverberates in fashion photography, cinematic shoots of the African safari, and a tourist industry (both cultural and sex-based) centered around Massai warriors.3 The slender Nubian body can also be found on fashion runways – the few times we actually do see Black supermodels. Think Somalia-born Iman or Sudan-born Alek Wek, and the numerous Somalian, Ethiopian, and Sudanese models following in their wake. When Black models emerge from other parts of the Diaspora – such as Grace Jones and Naomi Campbell –  they often approximate this tall, dark, and svelte aesthetic.

It is no wonder, then, that Kenyan actress Lupita Nyong’o became such a sensation when she appeared as a fashion icon on the red carpet during the critical recognition of her debut role in Steve McQueen’s 12 Years a Slave. She graced her first cover of Vogue in 2014, and its feature story described her as “an ancient Egyptian statue of a cat goddess.” She would become the first African woman to cover Vogue on four separate occasions, which is quite the accomplishment, given that its first Black cover girl, Beverly Johnson, landed on the cover in 1974 (and developed an eating disorder in the wake of her success), while Oprah Winfrey became the first Black non-model celebrity to grace the cover in 1998 (after being encouraged to lose 20 pounds). Even when the magazine sought to celebrate the voluptuous pop star Beyoncé with the headline “Real Women Have Curves” for her first Vogue cover in 2009, it nonetheless highlighted her efforts to cut down on eating and getting into shape. Such emphases suggest that, for Black women, the aesthetic challenge is less about skin color and more about size.

It is more than ironic that a woman with close ties to Nazis would garner such global influence over the beauty ideal captured in the Nubian body. However, Black artists and other creatives have often engaged in “aesthetics of resistance,” whether we look to Nyong’o’s reframing of Kenyan and African culture through her Vogue feature stories or in her involvement in Black Panther and her elaborately creative fashion sense that fuses African and Western styles during her promotion tour. There is no doubt that the video for “All the Stars” and the upcoming movie Black Panther have done wonders to laud and center the beauty of dark skin and natural hair, especially in a culture that has often praised lighter-skinned, straight-haired women. Indeed, these narratives are adding layers of complexity to the so-called “primitive” ideal that Riefenstahl sought to create. Nonetheless, as Anthea Kraut—studying the earlier work of anthropologists Zora Neale Hurston and Katherine Dunham—suggests, “primitivism and the free associations between African American [culture] and Africa that it encouraged unwittingly laid the groundwork for diasporic formulations.”4 It is in the creation of Diaspora that the Nubian body enables a transnational visibility that may hopefully extend to a diverse array of Black body types.

Comments on “The Nubian Body, African Aesthetics, and Cultural Imagination”