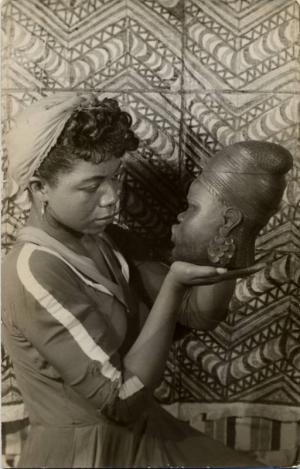 Last month, writer Zipporah Gene, of Nigerian descent, set off a firestorm when she accused African Americans of “culturally appropriating” African fashions and style – specifically targeting those who attended this year’s Afropunk festival. To say these are “fighting words” is putting it mildly.

While various African Americans sought to counter her arguments by stating how our experience of racial and economic oppression in the United States facilitated the historical erasures of our actual knowledge base of which West African cultures and tribes could be traced back to our ancestral lineage – hence why we claim the entire continent as a whole in attempts to display “Afrocentric” consciousness through visual displays of fashion and style – few actually engaged her critique of African Americans’ relative privilege within the global sphere of Black Atlantic and Black Diasporic politics and what that privilege means when we project a “futurism” by signifying on an African past.

Yes, as Tyree Boyd-Pates argues over at the Huffington Post, “When native African people restrict the cultural involvement of others based on their Diasporic location, they implicitly perpetuate the same colonialism that separated Africans from Africa.” However, what are the ways that our specific location within the U.S. – as oppressive as that location might be (from mass incarcerations to state violence to continued discrimination in housing and education and various “stereotype threats”) – places us at the center of the Diaspora or places us with particular power and privilege to influence the global and transnational spheres of culture or even to define racial discourse and the “black struggle”?

Anyone traveling to different points of the Diaspora – Jamaica, or Brazil, or Nigeria, or South Africa, or Toronto, or London – can pinpoint where African American culture has seeped into various black communities throughout the world (from celebrations of President Obama to our hip-hop and R&B artists playing in nightclubs, to “Black Lives Matter” adopted as a racial-justice rallying cry).  We here in the U.S. can’t say the same about the rest of the Diaspora (unless we are already participating in those spaces here as immigrant communities or children of immigrants). Indeed, African Americans have enough opportunities to mix it up and learn from our local African and Caribbean counterparts, if we wish to expand beyond our own little enclaves, which means that our “dashikis” and “face paint” need not exist as mere “appropriation.” I venture to guess that many “African Americans” in the Brooklyn-based Afropunk event have direct connections back to the continent.

At the same time, what are the differences between “cultural retention” passed down from our enslaved ancestors – like Voudou or Candomble (a religious culture that even Nigerians have to travel to Brazil to learn more about – seeing that our New World ancestors preserved indigenous customs better than the continental Africans who were being colonized by Europeans, despite our slavery conditions) – and “cultural re-invention,” represented by nation-based modern concepts of the “Motherland” (afros, gele wraps, dashikis)? More importantly, how do we distinguish between these black cultural practices and the interracial practices represented by cultural appropriation?

Earlier this year, a fascinating art exhibit by Roger Peet sought to highlight the power and privilege of whiteness in adopting and simultaneously erasing non-white cultures. However, whites are not the only ones who engage in adopting cultures alien to their own. What remains to be seen is how we can move toward cultural exchange based in mutuality and respect rather than on power and privilege. This would mean recognizing those who participate in “cultural syncretism” (e.g. rapper M.I.A. clumsily attempted this with her “Broader than a Border” video, despite appropriation accusations) versus who engage in “cultural appropriations” (e.g. the Miley Cyruses, the Iggy Azaleas).

Beyond popular culture is the academic world, and my own research on South African historical figure Sara Baartman, the “Hottentot Venus,” was called into question by South African scholars who took me to task for collapsing her history into one of “black womanhood,” despite historical constructions of the racial differences between “Negroes” and “Hottentots.” Even before publishing Venus in the Dark, I would be remiss to not mention how my position as a U.S. scholar – despite being a black woman – paved the way for considerable access to Parisians museums, research centers, and even the South African embassy (arranged by a close contact with someone working in Paris’s U.S. embassy at the time).

All of this is to say: Zipporah Gene needs more nuance in her own understandings of black cultural exchange, but her point about African American privilege within the Diaspora should not be dismissed. What does it mean when our most celebrated U.S. scholars and artists who championed the Diaspora – think Zora Neale Hurston, Katherine Dunham, and Lois Mailou Jones – accessed places like Haiti during U.S. occupation of the island and through prestigious academic grants? Then again, how do we position scholar-artists like Pearl Primus, with Caribbean roots and radical politics that made her a target by the U.S. government but her anthropological positioning allowed her to escape this country and deepen her dance scholarship on the African continent?

These pioneers, already stemming from longer traditions of Garveyism and Pan-Africanism, gave us important tools for decolonization and transcendence from “racial minority” status when thinking of global and transnational blackness. But if want to engage in more egalitarian forms of cultural exchange, we would have to seriously “decenter” African Americans in the Diaspora, as Brazilian scholar Patricia Pinho argues.

This does not mean that we should stop our attempts at “Afrocentric” fashions, as Gene suggests, but it might mean contextualizing local and global politics. Furthermore, such accusations work both ways. When filmmaker Steve McQueen was accused of minimizing the “African American” experience in 12 Years a Slave, since neither he nor the film’s stars were from the U.S., he flippantly remarked, “My boat went one way and theirs went another.”

Invoking what fellow Brit Paul Gilroy calls “The Black Atlantic,” McQueen gestures toward a Diasporic consciousness. But obviously our power and positions differ significantly depending on where our boats landed. We will need to remember this when attempting to engage each other with mutuality and respect.

Comments on “Between Diasporic Consciousness and Cultural Appropriation”