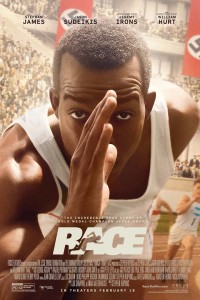 It is always quite difficult for me to watch Hollywood biopics on celebrated African Americans figures. Too many of these figures have been wrapped tightly in myth and hyperbole, and these films often wrap them ever tighter. Rarely do the true and complete stories of these historic figures appear on the big screen.

I am not sure whether I am going to see Race, the biopic on Jesse Owens released this weekend. Some of early reviews—though mixed—claim Race is inspiring. And that comes as no surprise. After all, this son of Alabama sharecroppers and grandson of enslaved Africans had to outrun vehicles of adversity to reach the 1936 Summer Olympics in Nazi Germany. Once in Berlin, he overran the show. Owens won a record-breaking four gold medals in the 100-and-200 meter dashes, the long jump, and the 4×100 relay.

Under the watchful eye of Chancellor Adolf Hitler, Owens enshrined himself as one of the greatest track and field athletes of all time. And this label is hardly a hyperbole. It is in no way a myth.

The hyperboles and myths can instead be found in the writing of Owens’s legacy away from the track and field. His golden runs and jumps “single-handedly crushed Hitler’s myth of Aryan supremacy,” ESPN’s Larry Schwartz conjectured recently. Actually, Owens did not outrun this racist idea. Germany dominated the 1936 Summer Olympics, winning by far the most medals—89—and 33 more than the second ranked United States. With this staggering margin of victory, Nazis were still able to make the case for Aryan supremacy.

Owens is remembered as the righteous American who took on, and took down the big bad Nazis. The United States is held up as the force of good, and Nazi Germany is held low as the force of evil in 1936—before the horrific Holocaust. But Jesse Owens’s true story exposes the mythology of these popular memories. 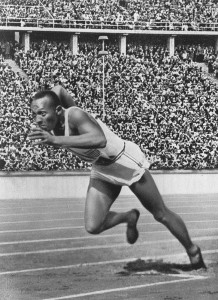 To the filmmakers’ credit, Race does hint at this after story. For those of you planning to see the movie, I don’t want to give away its ending. But according to reports, Race does not have a fairy tale, feel-good Hollywood ending. And certainly Owens’s life–and the life of Black America–after the Olympics was anything but feel good.

When Owens arrived back in the United States to a ticker tape parade, civil rights workers leaders hoped—for some strange reason they believed–that the achievements of Black athletes could persuade away racist ideas. “For these millions, who hold the solution of the race problem in their hands,” The Crisis of the NAACP intoned in 1935, “the beautiful breasting of a tape by Jesse Owens and the thud of a glove on the hand of Joe Louis carry more ‘interracial education’ than all the erudite philosophy ever written on race.’”

The myth making Americans have positioned Jesse Owens as this interracial educator, as this speedster for racial progress, as this racial trailblazer. In reality, Owens hardly blazed antiracist trails for himself, let alone Black America. Entertainers, advertisers, and politicians snubbed Owens in the late 1930s. He did not find economic security until corporations contracted him for public relations in the 1950s.

In the meantime to stay out of poverty, Owens staged exhibitions, running against horses and dogs. “People said it was degrading for an Olympic champion to run against a horse, but what was I supposed to do?” Owens said. “I had four gold medals, but you can’t eat four gold medals.

If anything, his golden Olympic rushes, his dashes against animals—through no fault of his own—actually led to the reproduction of racist ideas. All types of anatomical and behavioral explanations were published to explain the success of Black athletes in the 1932 Olympics and again in Berlin in 1936.  Yale track coach Albert McGall and notable X-ray specialist E. Albert Kinley repeated the old theory: Black sprinters had elongated heel bones that gave them anatomical leverage. The well-known physical educator, Eleanor Metheny, conducted bodily studies and “found that Blacks had longer legs, narrower hips, and deficient chest construction—made for great speed led but little stamina,” remixing the old theory of the great power but little stamina of Black boxers.

“It was not long ago that his ability to sprint and jump was a life-and-death matter to him in the jungle,” explained Dean Cromwell, the famed University of Southern California track coach and assistant head coach for the U.S. track team at the 1936 Berlin Olympics. Cromwell had clearly watched too many Tarzan movies of wild Africans battling with wild beasts in jungles. And these wild animal Africans had been tamed by White Americans, according to John Hopkins physiologist Charles D. Snyder. “We must remember that the Negro boys were trained by white men in the white man’s institutions,” Snyder stated in the October 1936 issue of The Scientific Monthly.

Howard University anthropologist W. Montague Cobb tried his best to undermine these racist ideas about natural Black athletic superiority. He took measurements of Jesse Owens’s body. The Black sprinter did not possess the “Negroid type of calf, foot and heel bone” that supposedly gave Blacks a speed advantage, Cobb found in 1936. Famed USC sprinter Howard Drew was “usually taken for a white man by those not in the know,” he also noted. Harvard’s decorated sprinter and jumper Ed Gourdin had straight hair and a light brown complexion. “There is not a single physical characteristic, including skin color, which all the Negro stars have in common which definitely classify them as Negroes,” Cobb concluded.

Before I entered into those years of research for my forthcoming book, Stamped from the Beginning: The Definitive History of Racist Ideas in America, I knew Black people had often been likened to animals. But I did not know that racist ideas had racialized animals. I did know now that from the beginning, animals have been stamped at the bottom of the racial hierarchy, looking up at their relatives, those beastly Blacks, who were looking up at humanoid White people. I narrated how this came to be in Stamped from the Beginning, how it came to be that Blacks were thought to be physically superior to Whites due to their closeness to the most physically superior beings on earth: animals.

Africa came to be seen as the animal kingdom. As such, racist ideas came to regard Jesse Owens and other Black people as closer to animals and superior to White people in all of the so-called unintellectual physical activities—athletics, dancing, sex, manual labor, petty criminality, spirituality, reproduction, and bodily healing.

Racist ideas came to regard Black people as superior animals and inferior humans.

Comments on “On the Racist Ideas Jesse Owens Could Not Outrun”