loading...
By Marquis Bey February 19, 2020 Comments Off on On America 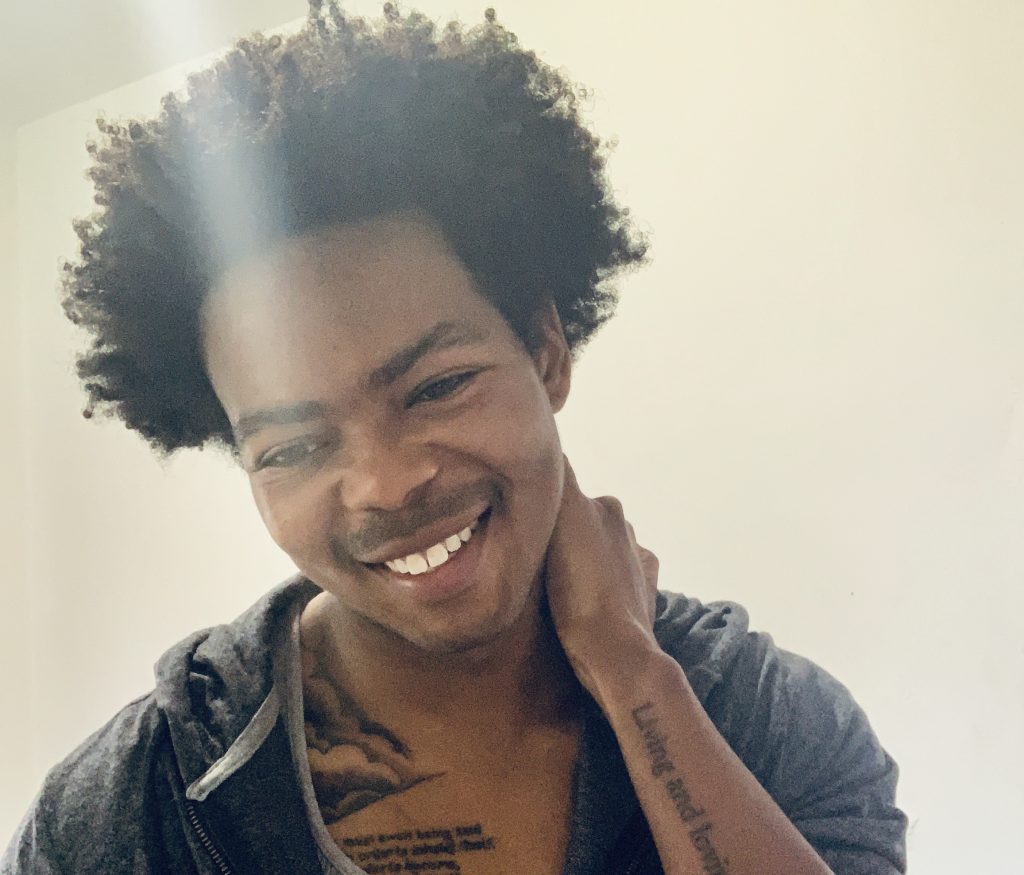 “I love America more than any other country in this world, and, exactly for this reason, I insist on the right to criticize her perpetually.” —James Baldwin

Get people talking about “America” and you see real quick who has your back and who doesn’t. Such a weighty word, a terminological explosive cordoning off, usually, where one stands in relation to others on the most pressing of issues. To ask someone “What do you think of America?” is to invite them to make quite clear where they’ll be, what they’ll do, and how they’ll feel when things go down.

I’m fascinated by, not the geographic locale necessarily (though that absolutely fascinates me too), but the invocations of the term, what it does to people, what it reveals, and what it signifies. With this comes some peevedness with some of its uses and abuses (not at all of the same effect of the abuses that that which the term indexes has doled out). I am quite uninterested, I must be honest, with the boring, off-hand flits of the term of course by those who imbue it with their own jingoist fantasies and fetishizations of “the seemingly white seemingly male ostensibly straight founding f*ckers,” but also by those who name themselves as diametrically polarized with these people.

You know how there are some who flex their real-Black-raw status by spelling “America” Amerikkka? How woke of them, those super-duper radical people who make plain their disdain for the U.S., hinting not-so-subtly at its underlying white supremacy. Now, I jest a bit. I’m a tad sardonic in my tone as I convey this, but there is still a little side-eyeing. I’m cool with it, really, though it strikes me often as half-baked. Which is to say, Okay, keep going. What else? To end at Amerikkka is assumed sufficient work, the end of one’s (Black) radicality, arms folded, feet up, and a scowling visage that almost manifests a Black Power fist on the brow. I am, though, still unimpressed.

Okay, okay, maybe not unimpressed so much as bored with quippy displays of phrasal radicalism. You can say all the “We’ve been enslaved for 400 hundred years!” (and some lengthening it to 500 years, both of which are not quite on the mark) and “Love Black. Live Black. Buy Black” you want, and I’ll applaud, albeit halfheartedly at best. This does not a radical make, I’d say, however. What I want is not the cessation of these sorts of remarks, as they are truly integral parts of a Black radical sensibility and a recognition of language’s efficacy in inaugurating justice; rather, I want more: I want analyses, I want treatises, I want history, I want policy, I want abolition, I want communes, I want literal and figurative stealing what one can. We got muhf*ckas out here slick with the implicit and explicit white supremacist rhetoric, masterminds of gerrymandering, on point with historical revisionism and seemingly credible sources to support it. I quite frankly don’t have time for y’all to think penning or verbalizing “Amerikkka” is the most baller move one could possibly make. You gon’ fall flat on your face, looking like a damn fool, if you don’t come correct with more than that.

But I digress; I’m getting carried away. This is not meant to be a diss, and I apologize, really I do. My aim is America and how, to purloin with a difference Langston Hughes, America sometimes was and sometimes wasn’t and oftentimes couldn’t be America to me.

The subject needs a pristine clarity: What is America, that “glamorous word,” to steal another of Baldwin’s phrases; what do we mean when we offer it as a term of assumed legibility? America, and I mean specifically North America, most specifically the continental U.S. (and Alaska too, I suppose; and I guess how Hawaiian inhabitants have been treated — so all of the U.S. then), is a project. I derive this thinking from Édouard Glissant, as he describes the West more broadly: the “West is not in the West,” he writes in Caribbean Discourse, it is “a project not a place.” I gather that what he references is how it is not at issue a particular place and its geographical location necessarily that marks it as what it is; rather, what gives the West, and in my specified formulation the U.S., its Westness (its Americanness; its U.S.-ness), as it were, is how it articulates itself. In other words, the U.S. does something, the U.S. acts itself as a certain kind of force and presence. Such a force and presence has overwhelmingly (maybe even solely) deleterious effects on those that encounter the U.S.

For all its talk about democracy and freedom and wealth and success and all that jazz, the U.S. has not lived up to its proclamations. America viz. the U.S. thinks itself as righteous in the aforementioned respects yet leads the globe in incarceration and prison population, catalyzing the climate crisis, rape and sexual assault, murder (and that includes militaristic war), student loan debt, military spending, national debt growth pace — and that’s literally from a rudimentary Google search. Ridiculousness. So one actually begins to wonder about the sensibility of the right-wingers’ snarky query: Why don’t you leave?

I love the Baldwin quote that opens this piece, and so do many others, I’m sure. In my limited assessment, many use his quotation — which comes from his 1955 text Notes of a Native Son — as a defense against those who criticize our criticism, those whose trucks probably have one or two “America: Love It or Leave It” bumper stickers, likely accompanied by truck nuts and an exhaust pipe spewing chalky black smoke. (Am I being too stereotypical? My apologies.) As if our purported “exceptionalism” inoculates us from critique, our purported specialness indicative of divine perfection (“… wee shall be as a Citty upon a Hill” indeed), our purported power a testament to how much people just want to give us stuff. In these instances of defense, the emphasis is on the right to criticize. It is a criticism not meant to dispense hate, the syntactic logic goes, but rooted profoundly in love. I want, however, to emphasize the first part of the quotation: I love America more than any other country in this world … Yes, let’s talk about this. Why, Jimmy? And to what end, and most interestingly where does that love come from?

What is it that made Jimmy Baldwin begin the sentence that way when he, in his discursive mastery, could have easily written it “I insist on the right to criticize America perpetually, because I love her.” (There’s another essay to be written about the gendering of the country, but I’ll save that for a later date.) We know America has done us dirty. And yet we still love it (or do we, should we?). We know, as Danez Smith writes in “dear white america,” “we did not ask to be part of your America,” but they (Smith) write immediately following, parenthetically, “(though are we not America? her joints brittle & dragging a ripped gown through Oakland?).” And there it is, for me: Are we not America?

Perhaps this consolidates most fully my eye-roll at off-handed “Amerikkka” spellings. It strikes me that though critiques abound, interrogations and fed-up-ness pervades, frustration and condemnatory action soar, to simply leave or keep quiet if we wish to stay grossly disserves the fundamental, profound fact that Hughes alluded to decades ago: that I, too, am and have been here, working the body politic, engaging and struggling over the terrain of the political, the interpersonal, the environmental, the social, the historical. I mean, on a real baseline level, what would America be without Black people? “Amerikkka” does not think the seriousness of this question. Iterations and deployments of Blackness, methods and strategies and agitating of the people who we understand as Black, have, too, engendered the texture of this country. Surely we are not to blame for the mess we observe now — though, such absolution is specific to Blackness and not an absolution of various Black people’s sexism, homophobia, and the like — but we have had a hand or two, and some feet as well, in salvaging what might someday be, which is to say: can you imagine how royally f*cked the country would be if it were not for Black folks, and our variously imbricated gender and sexual and class identities, having established templates for radical world transformation (along with our accomplices too, we must note)? America, this is all to say, has our DNA swirling around it too; America bears a residual imprint of Blackness.

My primary affinity cannot lie outside of this terrain, this space, because it is precisely this terrain that has cultivated me and the things I call dear. Maybe this is why Baldwin begins his sentence with love, because he knows, and has long known, that if he is to love Blackness, he must demonstrate a profound love for America, for America is not to be reduced to its “kkk,” it has been forged, too, through the enslaved who broke tools and absconded and found corners where they eluded captivity, through the marching feet and protestatory outrages, through incendiary tracts and tomes. “Every day,” writes Charles Blow, “we make America” — and that “we” possesses some of the darkest hues, queerest genders, radical intellects, and abolitionary stirrings one can imagine.