loading...
By Rebecca Brenner Graham May 29, 2018 Comments Off on The Illusion of Progress in the Story of American Democracy

The word progress is central to contemporary political rhetoric. Self-described progressives work toward what they see as positive change. Meanwhile, a trend among moderates contends that the United States has achieved the desired status quo, and consequently, they cling to it. Farther right, many conservatives resent progressive views of progress. They seek to conserve or return to dangerous policies, but political moderates clinging to the status quo are – perhaps less obviously – equally dangerous. Too many moderates rest easy assuming that the U. S. has already attained racial equality. In this sense, the illusion of progress threatens American democracy. It is this illusion that literary scholar Gregory Laski unpacks in his new book, Untimely Democracy: The Politics of Progress after Slavery.

In Untimely Democracy, Laski brings expertise on language and writing to a close analysis of historic texts that illuminate problems with the illusion of progress in American history. Laski focuses on historical figures such as Frederick Douglass, W. E. B. Du Bois, Pauline E. Hopkins, and other Black intellectuals. Drawing on them and their words, Laski “finds in their representations of the living legacy of bondage a rethinking of the aspirations informing some of our fundamental assumptions about this system: what a desire for ‘progress’ enables and forecloses, and how we recognize and achieve it” (3). Essentially, Laski argues that the past institution of slavery remains severely relevant, or “present-past,” and therefore political use of the progress narrative has mainly reinforced slavery’s impact.

Readers emerge increasingly skeptical toward any purported systematic improvement for the plight of racial minorities – particularly African Americans – in the story of American democracy. Although his study spans from the early republic through the contemporary United States, Laski emphasizes Black perspectives around the turn of the twentieth century. This formative period epitomized a collision between the optimism of emancipated persons who were once enslaved with increasing efforts by white supremacists to persecute African Americans.

Too many people assume that human history improves as time evolves. To the contrary, Laski applies W. E. B. Du Bois’s ideas of the “present-past” to the “politics of progress after slavery,” as the book’s subtitle suggests. “Present-past” describes an event or institution in the “linear” past that persists into the future via its legacy (18). Chapter one analyzes Du Bois’s idea of the present-past from The Souls of Black Folk, placing it in dialogue with Thomas Jefferson’s 1787 Notes on the State of Virginia. Then, chapter two uses Frederick Douglass’s narrative as a case study to explicate the present-past. For Laski, too many scholars cite Douglass’s 1877 meeting with the man who once enslaved him as proof of progress. Laski explains instead: “Whatever other victories his reunion with his former master may represent [he leaves] preoccupied anew by his ignorance of the precise date of his birth, a fact Douglass should have known had he not suffered slavery’s abiding injury: the child’s alienation from the mother” (63). Slavery remains present-past despite time passing, and overemphasis on supposed progress obscures the reality of damages done and what remains lost. 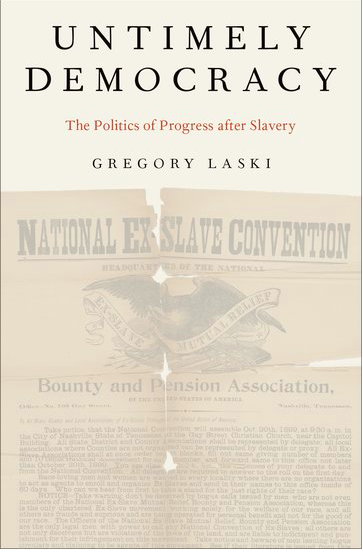 Throughout his book, Laski offers a message that is imperative for all citizens of American democracy and perhaps of the world: claims of progress from past to present do nothing but catapult past problems into the future, awaiting solution. Chapter three considers historical, literary, and political approaches to redress and reparations. Chapter four interrogates the “political uses of the unfulfilled in the writings of Sutton E. Griggs and Charles W. Chesnutt” (20). As African American writers of literature around the turn of the twentieth century Griggs, Chesnutt, and their ideas epitomize how the expectation of progress, optimism of emancipation, and the struggles of African Americans in a nation founded by slaveholders collided. Figures and themes from the previous chapters culminate in chapter five, in which Laski exposes “political hope” as a paradox through the scholarship of Pauline E. Hopkins, who he argues “should be understood as Du Bois’s coequal: a philosopher working in narrative form to reimagine the temporality of democracy” (163).

The author makes a case for the importance of historical analysis of literary circles. Laski explains his motivation behind this contribution: “Much important work of late has sought to unsettle the sense of the obvious that has become attached to this critical move, laying bare this methodology’s troubling assumptions not just for matters of periodization, but more fundamentally for our sense of a text’s relationship to its supposedly determining historical contexts” (24). In turn, his book serves as a model for the careful analysis of literary texts within historical frameworks.

Like the award-winning Stamped from the Beginning: The Definitive History of Racist Ideas in America by historian Ibram X. Kendi, Untimely Democracy uses chronological time as a backdrop for trans-chronological analysis of ideas. Since Jefferson and Du Bois appear in both books, they are the best example of this shared method. For Kendi, Jefferson personifies the racist because Jefferson believed that something was wrong with Black people, while Du Bois represents a transition from the assimilationist to the anti-racist because he discovers over time that the plight of African Americans in society are the consequences of racist policies, not choices or inherent attributes. While Kendi interprets Jefferson and Du Bois to chart racist, assimilationist, and anti-racist ideas, Laski in chapter one places Jefferson and Du Bois’s ideas in dialogue across time to interrogate their political uses of the progress narrative.

Despite its scholarly tone, Untimely Democracy: The Politics of Progress after Slavery resonates with wide audiences interested in the question of progress. In light of recent events, the act of questioning assumptions of progress in American history has suddenly become quite popular. However, books such as Laski’s Untimely Democracy, Kendi’s Stamped from the Beginning, and also The Pricing of Progress: Economic Indicators and the Capitalization of American  by historian Eli Cook, were all in the making for several years. Even when an African American held the office of President of the United States as Laski notes in his epilogue, false assumptions of progress pose a serious threat, as widespread and lasting change remains uncertain. The central characters of this book, especially Du Bois, Douglass, Griggs, Chestnutt, and Hopkins, understood this paradox over a hundred years ago, and readers should learn from them.