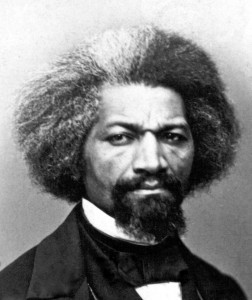 Frederick Douglass is widely recognized as one of, if not the, foremost black intellectuals of the 19th century. His wide-ranging speeches, essays, editorials, and correspondence cover topics that include abolitionism, feminism, theology, liberalism, and race relations, among others. In looking at Douglass as an intellectual, however, I get the sense that historians tend to privilege his more “mature” thought after his break with Garrison in the late-1840s. This is especially true of Douglass’s classic speech “What to the Slave is the Fourth of July,” which he gave in 1852 and which has appeared in countless edited collections, including David Hollinger and Charles Capper’s American Intellectual Tradition. In this post, I’d like to focus on some of the ideas Douglass articulated in his 1845 Narrative of the Life of Frederick Douglass, an American Slave: Written by Himself, especially what the text tells us about early African American secularism.

Even when teaching general survey courses such as American Slavery and Emancipation, which I am offering this semester, I find myself focusing quite a bit on the intellectual history of the topic, a situation with which many readers of this blog can likely relate. Such was the case when my students and I discussed Douglass’s Narrative last week. We started off by thinking through what it meant that William Lloyd Garrison wrote a preface to the book, a practice common in nearly all of the dozens of slave narratives I’ve read. We discussed this for about 15 minutes, as I did not want to give them my interpretation nor point out how common it was. They eventually came to see that the function this served was giving assurance to readers that this writer and thinker was capable of producing the text before them. We also had an interesting discussion regarding Garrison’s portrayal of Douglass’s ideas and the fact that he even urged Douglass at one point to dumb down his rhetoric because people would start doubting that such an eloquent African American man had ever been enslaved. We talked about what it means to be considered an intellectual authority, why some ideas are privileged over others, and the ties between race and abolitionist ideology.

From here, we moved into an examination of the Narrative as abolitionist propaganda and how one’s audience, as well as the broader social, political, and economic contexts, influence the rhetoric and ideas of a text. My students were initially surprised when I pointed out that Douglass made up the story about his master building a hut on the edge of the plantation for his grandmother to fend for herself. One student made a great point that even if Douglass was lying about this happening to his grandmother, he was very likely telling someone else’s truth, as this situation probably occurred fairly regularly throughout the antebellum South. This also provided a useful point of comparison to another famous slave narrative, that of Olaudah Equiano, and his claim to have been born in Africa. Vincent Carretta disputes this claim in his 2005 work Equiano the African, but even if Equiano did lie about experiencing the middle passage, that lie was true for other people and served a useful function in bolstering his arguments about the inhumanity of the slave trade.

Religion represents a central theme in the text and my students were quick to pick up on the irony and sarcasm Douglass uses to shed light on the hypocrisy of proslavery religion. But since I have freethinkers on the brain with my current book project, I also really wanted them to understand the ways in which he subtly rejects Christianity altogether (and not just the Christianity of the South) and offers secularism as a viable alternative to religious belief.

I did this primarily through a focus on his struggles with Edward Covey. On 1 January 1833, when Douglass was about 15 years old, he went to live with Covey, a man who had “acquired a very high reputation for breaking young slaves.” In the Narrative, Douglass subtly compares Covey to both Satan and Jesus. He notes of Covey “he had the faculty of making us feel that he was ever present with us. This he did by surprising us. He seldom approached the spot where we were at work openly, if he could do it secretly. He always aimed at taking us by surprise. Such was his cunning, that we used to call him, among ourselves, ‘the snake.’” Douglass’s referencing of “the snake” was a clear comparison to Satan, but directly after, he also wrote that Covey’s comings and going “were like a thief in the night.” By saying Covey’s movements were like “a thief in the night” Douglass also conflates him with Jesus, whose Second Coming, according to Peter and Paul, would also be like a thief in the night, or an unexpected hour. And this prospect did not inspire much hope in Douglass. If Covey is similar to Jesus, he suggests, then slaves cannot rely on the goodness of God to become free of bondage and instead must rely on themselves. [1]

This theme of cosmic abandonment and self-reliance would also appear in his description of a violent encounter with Covey and the means he used to prevail. After a beating that Douglass received from Covey, he resolved to go to his regular master for relief, which was on a plantation seven miles from Covey’s farm. His master, Thomas Auld, sent him back to Covey, a situation that parallels that of the apostle Paul in the New Testament sending back the slave Onesimus to his master. Upon arriving, Douglass knew he would get another beating so he hid from Covey and ran into his friend Sandy Jenkins, another slave who was traveling to see his wife. Douglass talked his situation over with Sandy, who said he “must go back to Covey; but that before I went, I must go with him into another part of the woods, where there was a certain root, which, if I would take some if it with me, carrying it always on my right side, would render it impossible for Mr. Covey, or any other white man, to whip me.” Sandy told Douglass that he had been carrying the root for years and had never been whipped by a white man. Douglass takes the “root” with him and Covey actually does not beat him. Douglass attributes this to it being the Sabbath and notes that on Monday morning “the virtue of the root was fully tested.” The root apparently failed the test, because Covey attacked Douglass anyway. The two fought for hours, with Douglass eventually prevailing. Covey could have had him arrested and possibly even executed, but Douglass believed Covey did not do so because it would have hurt his reputation as a slave breaker. Recalling the battle in 1845, Douglass wrote that it was one of the most significant moments in his life, as it “rekindled the few expiring embers of freedom, and revived within me a sense of my own manhood.” [2]

I pointed out to my students that the “root” that Douglass references in this situation also symbolized Jesus, and the fact that it did not work, combined with Douglass’s resistance to enslavement with physical violence, constitutes an early embrace of atheism and humanism on his part. Both Old and New Testament writers portray Jesus Christ as a root, and Douglass was certainly familiar with this metaphor. Indeed, he paraphrases one of them in the Narrative, that of Isaiah 53:2, which says of the future Savior that “He grew up before him like a tender shoot, and like a root out of dry ground.” When Covey attacked him, Douglass fought back, noting “from whence came the spirit I don’t know.” Douglass here rejects the example of Christ, and the supposed power of Christ, the root, in helping him navigate the world of slavery. As Zachary McLeod Hutchins argues, “rather than meekly submitting to the prevailing scriptural narratives of crucifixion and reenslavement…Douglass figuratively takes up his sword and strikes down Covey, abandoning his faith in a God who could send legions of heavenly defenders to aid weak and helpless slaves, but who chooses not to.” Instead, Douglass reclaims his manhood by fighting Covey and offers African Americans “an example of salvation through their own might rather than through faith in a submissive Savior.” [3]

Most of my students had not even read the Douglass’s Narrative, let alone considered the way that it spoke to early African American humanism. But our wide-ranging discussion did show them, and reinforce for myself, the importance of this text in understanding 19th century American intellectual history. Not only does it speak to some of the common themes that scholars and teachers of early American thought often explore, including religion, proslavery thought, and abolitionist ideology, but it also speaks to the origins of black secularism in particular and American freethought more broadly. This was the first time I had used this text in my own class but will certainly do so again.

This essay first appeared as a guest post for the U.S. Intellectual History blog. You can find the original essay here.