loading...
By Austin McCoy May 10, 2018 Comments Off on Progressive Movements and the Importance of Failure

Mary Frances Berry’s History Teaches Us to Resist: How Progressive Movements Have Succeeded in Challenging Times could not have arrived at a better moment. Donald Trump’s rise to power has spurred much mass demonstrations and mass organization in response to his election and policies. Hundreds of Americans gathered in Washington, D.C., to protest his inauguration. Thousands of outraged Americans assembled at airports to protest the administration’s travel ban on immigrants from Iran, Iraq, Libya, Somalia, Sudan, Syria, and Yemen, many of which are Muslim-majority countries. The national leftist organization, Democratic Socialists of America (DSA), is enjoying a resurgence. Activists Tamika Mallory, Linda Sarsour, Bob Bland, and others helped turned the Women’s March into a national network of activists fighting for progressive causes. Recently, millions of young people marched for their lives in response to mass school shootings and gun violence.

Drawing from her vast knowledge garnered as a historian, activist, and civil service under multiple Presidents, Berry presents a synthetic study of progressive movements from 1941 until 2009. Her narrative complicates prevailing frames in scholarship on U.S. political history emphasizing the rise and fall of New Deal liberalism and the ascension of conservatism after 1968, Berry’s analyses of the anti-apartheid movement, demonstrations for rights for the disabled, and protests against the wars in the Persian Gulf during the early-1990s and in Iraq in 2003 fills in gaps on scholarship on the “long” civil rights movement.

“Sometimes failure has reverberations” is Berry’s main argument, and lesson, for readers. Not every instance of resistance (defined in Berry’s book as disruptive acts challenging the state and prevailing public policies) and progressive movements successfully changed American society. Yet, Berry encourages readers to rethink our immediate assumptions and notions of success and failure when examining movements. It is important for scholars and organizers to study past “failed” activist organizations and movements because they often construct networks and institutional, intellectual, and discursive frameworks for activists to utilize in the future.

Berry organizes History Teaches Us to Resist thematically and chronologically. She arranges the text around the presidential terms of Franklin Roosevelt, Ronald Reagan, George H.W. Bush, Bill Clinton, and George W. Bush while her chapters on the movements to end the Vietnam War and apartheid in South Africa are the two thematic chapters. In her book, Berry utilizes her analyses of protests to advance a theory of social change digestible for a broader audience. She identifies several key characteristics of successful progressive movements—conspicuous and charismatic leadership, the use of an inside (institutional)/outside (movement) strategy, and the articulation of clear goals. Berry writes, “Protesters sometimes have difficulty keeping to a simple goal, and complicating messaging inhibits growth.” Then after citing the Occupy Movement as an example, she argues, “The more complicated the initiative, even a legislative one, the harder the work and the longer it takes to achieve success” (3). 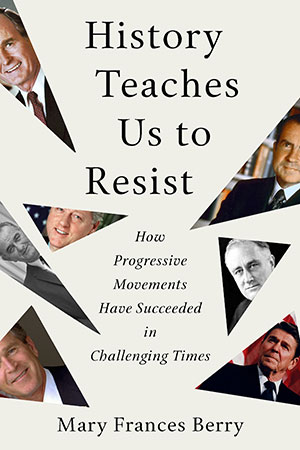 Even though A. Philip Randolph’s work to establish the March on Washington Movement (MOWM) during the 1940s and his challenge to Franklin D. Roosevelt to desegregate the defense industry is well-tread territory for historians of African-American History, Berry uses its example to illustrate her model for progressive organizing. Berry argues that charismatic leadership “is also important to ignite and sustain movements.” A. Philip Randolph exemplified such a leader as she centers his work as negotiator with Roosevelt, organizer of other Porters and Black Americans, generally, and a figure who developed relationships with other civil rights organizations. The MOWM’s commitment to desegregation and Black American workers’ rights, according to Berry, “set the agenda for civil rights accomplishments over the next twenty-five years” (8).

However, Berry viewed the MOWM’s gendered division of labor as a central problem of the organization. According to Berry, Black American women like Anna Arnold Hedgeman often performed a disproportionate amount of labor. And, for these Black women, greater leadership authority and decision-making responsibilities were not fringe benefits accompanying their heavier workload. Berry correctly connects the sexist division of labor within the MOWM to the March on Washington’s organizers (A. Philip Randolph being one of them) failure to include Black American women among the main speakers. However, Berry does not explicitly make a connection to Black American men’s charismatic leadership and the gendered division of labor within the movement.

Berry’s autobiographical chapter on anti-Vietnam War protests represent a compelling example of failure having reverberations. “Like others in the student movement,” Berry writes, “I had assumed for years that the protests had failed because the war had continued until 1975.” However, the antiwar movement persisted. Berry aptly discusses the importance of the Pentagon Papers, the Kent State killings, and the National Chicano Moratorium in August 1970. She points out that protests against the military draft led to its end in January 1973. Berry correctly cites the abolition of the military draft surely as a significant win for the peace movement. Yet, Berry’s analysis of the antiwar movement engenders an important question for those who study the anti-Vietnam War movement: What role did protests play in the two years preceding the formal withdrawal of U.S. personnel and U.S.-backed Vietnamese officials from Saigon in 1975?

Berry’s analysis of the Free South Africa Movement (FSAM) illustrates the importance of utilizing an inside-outside political strategy and strong leadership in progressive campaigns. She highlights protests at colleges, the movement to divest from corporations that invested in, and/or profited from, apartheid, and the contributions of Black elected officials like Congressman Ronald Dellums, and Randall Robinson’s and TransAfrica’s leadership. Despite all of these moving parts, however, Berry credits a top-down approach in her explanation of the FSAM’s success. She not only references hers and other leaders’ access to elected officials, but also their “secrecy” and “holding information within a small group” as necessary tactics (107).

The Free South African Movement could serve as inspiration for progressives organizing today. This chapter reminds readers that a Black-led social movement could thrive in the midst of a more reactionary presidential administration. Yet, Berry contends that a convergence of factors explains its success in the Reagan era: Black South Africans resisted and organized against the regime for decades, activists outside of South Africa engaged in various acts of solidarity protests, and Americans opposed US foreign policies supporting apartheid.

Despite the book’s focus, Berry does not overstate progressivism’s trend in national politics. Progressive resistance and protest between 1980 and 2009 often circled the elimination and reversal of rights for particular marginalized groups. As Berry notes, differently-abled activists engaged in nonviolent direct action in the effort to push Congress to pass the Americans with Disabilities Act. ACT UP successfully organized and mobilized to raise awareness around the HIV/AIDS crisis during the 1980s and 1990s. However, comprehensive health care reform failed. Differently-abled Americans and those living with pressing and persistent health concerns would have surely benefitted from such policy.

Berry also takes up issues facing contemporary progressive movements in History Teaches Us to Resist. She recognizes the tensions with the relationship between developments in communication technologies and social media (i.e. Facebook and Twitter), organizing, and state repression. Berry acknowledges that Facebook and Twitter can help mobilize larger numbers of people more quickly than older technologies. But the internet and social media means can also be used as anti-subversive tools by state authorities to “conduct surveillance and spread disinformation to disrupt protest.” Then Berry correctly reminds readers that social media is only one of many different organizing tools, “Some people still mistake using Twitter and Facebook as the sum and total of their protest” (180). Conversely, Twitter allows one to see protest’s expansive reverberations as activists draw from the past and the present while mobilizing supporters around a particular cause.

Berry’s History Teaches Us to Resist offers crucial lessons for current activists and scholars. She derives an organizing model emphasizing a diversity of tactics needed to confront the political establishment from a long history of progressive activism during the twentieth and twenty-first centuries. Elucidating this narrative offers insight for those who organize and scholars of social movements. Berry reminds us that not every instance of resistance and not every campaign successfully changes policies, stops presidential administrations from implementing their agenda, nor transforms society. Yet, Berry helps us appreciate the power of change over time.  She maintains that one’s organizing work often extends beyond the particular event, moment, or movement. Successive, and successful, movements often draw from the historical and institutional memory of past collective actions. Berry reminds us that in learning from the past and building on it, we should not hold our breaths but always hold out hope.