loading...
By Aderson Francois September 20, 2018 Comments Off on James Baldwin’s Ideas and Activism during the 1980s

James Baldwin died on November 30, 1987, at his home in Saint Paul de Vence, a small village on the French Riviera that, since medieval times, had walled itself around a hilltop church and castle to ward off the marauding armies of Europe’s kings and queens, marching across the Alpes Maritimes Mountains to the Mediterranean Sea. Over time, the hill’s battlements and ramparts were covered with flowers, vines, and olive trees, and it is there, amid the narrow cobblestone streets, ancient crumbling walls, and tolling church bells, where Baldwin in his dying days, wracked with stomach cancer, seemingly no longer America’s race prophet, came to be with friends and family, in a final exile from the country of his birth, “the gaudiest, most valuable, and most improbable water wheel the world has ever seen.”

Baldwin spent a lifetime preaching that he “did not doubt for an instant, and [would] go to his grave believing that we can build Jerusalem, if we will.” And, while Ronald Reagan’s 1980 election may have led him to realize that he had not fully grasped “the reality, the depth, and the persistence of the delusion of white supremacy in this country,” Baldwin had never stopped trying to find—to write—a road to Jerusalem. His younger brother David, who had flown from New York to help care for him, recalled years later that toward the end Baldwin grew so frail that David had to carry him, cradled in his arms as small as a child, from the first floor bedroom to a large table in the dining room where, too weak to eat, Baldwin kept writing even when “his vision would not convert into splendid sentences in the way that it used to.” And David remembered that in one of their final conversations, when asked why he kept writing, Baldwin, who always saw “spinning above the thoughtless American head the shape of the wrath to come,” answered that when everything one day came to ruin, he hoped that the next generations digging in the rubble would find something of his work buried in the wreckage and use it to start over again.

Baldwin’s writing was at once apocalyptic and redemptive, and this image of things crumbling to rubble and digging through the ruins to start over again was a recurring theme in his work; a hard-earned leitmotif of his view of the human condition in general and the African American experience in particular. “I think I know how many times one has to start again, and how often one feels that one cannot start again,” Baldwin once wrote, but “one can never remain where one is” because we owe it to ourselves and to each other to “bear witness” for generations both past and yet to come. 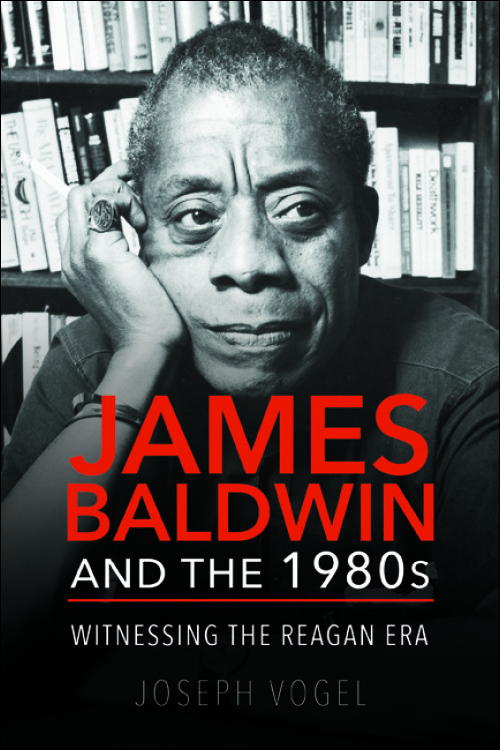 In his incisively reasoned and beautifully written volume, James Baldwin and The 1980s: Witnessing the Reagan Era, Joseph Vogel picks up on Baldwin’s theme of digging through the rubble and, in doing so, unearths new pieces of Baldwin’s late years. Vogel opens with Baldwin’s own words that a writer’s obligation is “to aspire to do his work so well that when the breath has left him the people – all the people – who search in the rubble for a sign or a witness will be able to find him there”(1). Vogel’s purpose here is not necessarily to dig up and rescue Baldwin’s reputation. As Vogel notes, while both literary critics and civil rights activists began to question the merit of Baldwin’s work as early as the late sixties, of late his reputation has experienced a revival of sorts. Rather, what Vogel proposes to show is not only that Baldwin remained to the very last “one of the most daring and interesting critics of the late twentieth century,” but more importantly that his voice and his ideas were particularly suited as a corrective to the vulgar materialism, historical amnesia, and retrogressive aspirations of the Reagan era (139).

By the time Baldwin retreated to Saint Paul de Vence for the last time, his critics believed he was in intellectual decline, having turned into a caricature of his former self, forever upbraiding America for its sins, incapable of acknowledging, his critics claimed, the progress the country had made on matters of race. Such criticisms could not have possibly come as a surprise to Baldwin, who often described himself as a sort of Jeremiah shouting at the walls, and who, as a former child preacher, must have understood all too well the scorn usually reserved for prophets whose anger, no matter how righteous, no matter how loving, ultimately grow tiresome to the very people the prophet aims to redeem. The originality of Vogel’s work is to show that by the time Reagan rose to power, Baldwin wasn’t merely warning Americans about the fulfillment of the prophecy “God gave Noah the rainbow sign, No more water, the fire next time.” Rather, Baldwin saw in his late writings an opportunity to complicate the simple, not to say infantile, Reagan narrative that it was morning in America. To Vogel, Baldwin saw his responsibility as bearing witness to the Reagan years so that once it all came to ruins, the country would find him in the rubble and rebuild.

Vogel does not engage in a comprehensive overview of Baldwin’s output during that period but carefully selects five pieces: Just Above My Head; Here Be Dragons: Freaks and the American Ideal of Manhood; The Welcome Table; To Crush a Serpent; The Evidence of Things Not Seen. Together they “offer a perspective that is lacking in the vast majority of accounts of the 1980s” (138). For example, to Vogel, Just Above My Head, Baldwin’s final novel on the life and death of a Black American crossover singer, stands as a rejection of the idea that the crossover popularity of such stars as Michael Jackson, Whitney Houston, and Luther Vandross was a sign of irreversible progress. As Vogel explains, for Baldwin, Black music contained a code that “told the true story of Black America,” one that was “inextricably bound to suffering,” but one that is “reduced and simplified” in the act of crossing-over, as if white America, particularly in the Reagan era, could not bring itself to hear the code beneath the beat. Similarly, Vogel maintains that Here Be Dragons can only be read as a repudiation of the John Wayne caricature of American masculinity Reagan embodied as president with almost cartoonish mimicry. In that essay, Baldwin argued that for too long we mapped the American identity with rigid borders, as if marking the unknown boundaries where we dared not cross with the fearsome ancient warning: Here Be Dragons. Vogel digs down to the core of Baldwin’s critique of American society in the late 1980s:

Baldwin’s map metaphor draws connections between race, masculinity, and nationalism. Powerful nations like America, he suggests, define themselves (like identities) by arbitrary and oppressive borders and by fear of the unknown. As shattering America’s self-image as exceptional model (and distributor) of democratic values, he critiques imperialism as a white masculine delusion as misguided as “those who insisted the world was flat.”

Soon after Baldwin’s death, his family lost control of the Saint Paul de Vence home. The wing where he’d lived was demolished, and in time the rest of the property fell into ruin; garden unkempt, foundation crumbling, virtually open to the elements, vegetation and wildlife creeping inside over walls and windows. Preservationists tried to save it, with plans to turn the home into a writer’s retreat, but their efforts failed. A developer acquired it and a sign appeared at the gate announcing the property was to be turned into a luxury apartment complex named, seemingly without irony, “Les Jardins des Arts.”

Perhaps Baldwin would have found a perverse humor in his home in this ancient French medieval village having succumbed to a particularly American species of gentrified ruin. The very place he called in his last play “The Welcome Table” would now answer to the description he once applied to his birth country: a gaudy and valuable water wheel. But perhaps also Baldwin would have found that form of ruin somehow fitting and would have dug through that rubble of luxury in order to bear witness to what all too often feels like a resurrection of the days of the Reagan era. It says something about the excellence of Vogel’s analysis of Baldwin in the Reagan era that, reading through the book, one can almost imagine Baldwin digging through the rubble of the Trump era in order to write a road for us to a Jerusalem that, somehow, always seems to recede before us.

Aderson Francois is a Professor of Law and the Director of the Civil Rights clinic, and the Voting Rights Institute at Georgetown University. His scholarly interests include voting rights, education law, and the history of slavery and Reconstruction. His practice experience encompasses federal trial and appellate litigation concerning equal protection in education, employment discrimination, voting rights, marriage equality, and the right to a fair criminal trial. Follow him on Twitter @abfrancois.