loading...
By Grace Gipson April 19, 2019 Comments Off on The ‘Baby Dolls’ of New Orleans: Gender, Race, and Self-Creation

“Is the unruly woman masker still relevant?” This question posed by Xavier University dean and professor Kim Vaz-Deville speaks to the determined nature of Black women who have always created unique performative avenues of expression that rewrite conventional narratives. Thus, it is no surprise that a community of women exists who “created a collective identity and [when residents] put on a costume that reflected their sense of themselves.” Known as “Baby Dolls” due to their personality and child-like attire of short dresses, bloomers, and bonnets, along with their pacifiers and bottles, this group emerged in the early 1900s, during the height of Jim Crow. Dissatisfied with the dismissive treatment they encountered based on their race and gender, the Baby Dolls became formidable voices in their community. The origins of the Baby Dolls have been debated, with some claiming they began in the ‘red-light’ district of New Orleans and others claiming they were the creation of Sixth and Seventh Ward Afro-Creole families like the Batiste’s (Golden Slipper/Dirty Dozen-Baby Dolls) and the Phillips’ (Gold Digger-Baby Dolls). Regardless of their uncertain origins, the Baby Dolls have made an impact worth recognizing and this recognition comes in the form of the anthology titled, Walking Raddy: The Baby Dolls of New Orleans (University Press of Mississippi).

Walking Raddy builds upon the 2013 book, The “Baby Dolls”: Breaking the Race and Gender Barriers of New Orleans Mardi Gras Tradition, and the community exhibition, “Contemporary Artists Respond to the Baby Dolls,” at the McKenna Museum of African American Art (New Orleans, LA) curated by K.M. Vaz-Deville. Through a diverse collection of essays, Walking Raddy analyzes Mardi Gras carnival culture, especially in relation to the Baby Doll tradition and ‘masking’ practices. The essays variably discuss gender norms, the reinforcement of gendered and racial stereotypes, and unique forms of fun and self-expression. Each offers engagement with the ‘politics of respectability’ and its role in shaping popular culture.

Walking Raddy functions as a multi-faceted text that showcases the significant impact of the Baby Dolls, as well as the evolution, restoration, and preservation of an iconic tradition. As a multidisciplinary collection, it brings scholarly attention to an aspect of New Orleans and Mardi Gras carnival heritage that is often disregarded or overshadowed by male-dominated traditions.  Edited by Vaz-Deville, Walking Raddy begins with a reclamation and offers an origin story regarding the Baby Doll culture and masking tradition in New Orleans. Readers are made privy to interviews from prominent Baby Dolls Merline Kimble and Cinnamon Black (Resa W. Bazile) surrounding the topics of re-writing narratives, white participation, lingering stigmas, and commercialization. This lays the foundation to further delve into the influential contribution of the Baby Dolls to the city of New Orleans.

Following the Baby Doll conversations, readers take a deep historical dive into the foundations of the Baby Dolls in a section titled, “Claiming their own Mardi Gras.” First it outlines the historical role that enslaved and free Black people played in fighting for freedom. It also highlights the negotiations of sexuality during Jim Crow era in New Orleans through the essays of historians Jessica Marie Johnson and LaKisha Simmons. Johnson surveys the eighteenth and nineteenth centuries and the central role that enslaved women and free women of color played in New Orleans’s commercial and cultural development. According to Johnson, both groups of women “initiated and fostered the development of an Afro-Creole Gulf Coast culture, visible today in contemporary foodways, musical, and spiritual practices” (22). Simmons essay draws on archival sources from 1930-1954 to discuss the experiences of Black women and girls who experienced sexual traumas and how they navigated the city’s “pleasure geographies. Both Johnson and Simmons explored how these women expressed their legitimacy and desire for pleasure and sexual autonomy, which positively influenced the Baby Doll tradition. Additionally, this section holds a chapter on Black women writers of New Orleans, “Protectors of the Inheritance” from New Orleans literature scholar Violet Harrington Bryan. Bryan’s chapter approaches New Orleans history and culture from the perspective of women writers and poets like Alice Dunbar-Nelson, Sybil Kein, Mona Lisa Saloy, and Brenda Marie Osbey. Each of these women offered various perspectives, especially regarding Creole life in New Orleans, as they dealt with such topics as colorism, the complex roles of women, the preservation of Louisiana Creole culture and folklore, healing through the community, and family masking traditions. Voiced through these women, their creative written word ensures that the city of New Orleans and the Louisiana Creole culture is acknowledged, remembered, and passed on to future generations. 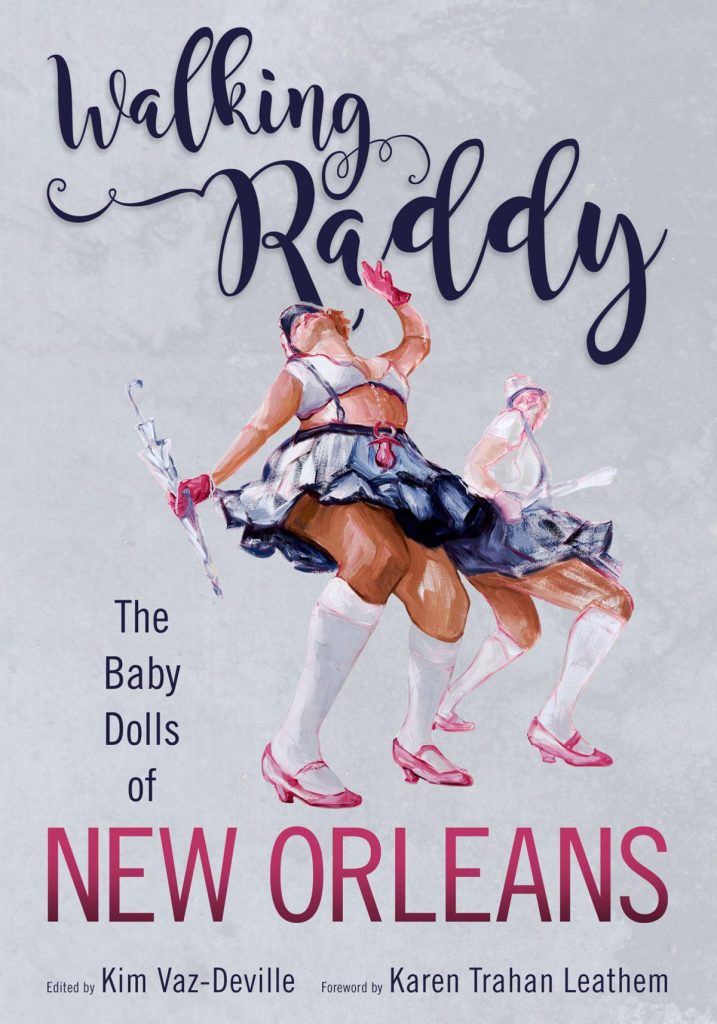 Once the origins are provided and the history is established, the authors engage with the relevancy of Black women maskers and how they boldly created and embraced particular performative carnival traditions. In the section titled, “Black Women and Carnival Performance Traditions” readers gain an understanding of specific, physical masquerade aesthetics and performances. In Pamela R. Franco’s essay “Women Maskers” she explores how oppressed and disenfranchised Black women used their physical bodies in the carnival space to expose the issues that affected them and to reclaim agency and power. Including music in her analysis, Melanie Bratcher’s essay “Operationalizing ‘Baby’ for Our Good” studies the objectification of Black women and the usage of women as “babies or dolls” in twentieth century song lyrics.

Preserving the heritage and tradition of the Baby Dolls is achieved by those devoted to maintaining its historic value.  The section entitled, “Memoirs and Musings” further examines the beginnings of the Baby Doll and masking tradition by tracing how it received its iconic status through dance and musical influences in New Orleans. The essays here highlight the Batiste family, one of the most well-known Baby Doll masker families and the key to reviving the tradition after Hurricane Katrina. It also highlights the launching of the first integrated Baby Dolls group under the tutelage of the K-Doe Baby Dolls and the revealing personal encounters of recreating the spectacle of sass and female prowess of Baby Doll maskers. Each memory encapsulates the self-determination and commitment to keep the culture and tradition alive.

After readers gain these personal reflections and historical experiences, the collection closes with a contemporary perspective surrounding the future of the Baby Doll tradition. In Mora Beauchamp-Byrd’s analysis of “John McCrady’s ‘Southern Eccentric Regionalism: Negro Maskers from the Mardi Gras Day Series of 1948,” she expounds on how McCrady’s work and influence from early Baby Doll masqueraders played a role in making the South stand apart from the rest of the United States. This influence is further surveyed in Ron Bechet’s essay, “Culture-Building and Contemporary Visual Arts Practice.” Bechet analyzes the visual arts community creation and the significance of how the “Contemporary Artists Respond to the New Orleans Baby Dolls” exhibition. Through this exhibit, readers come to understand the role of grassroots organizing alongside contemporary artists’ encounters with the Baby Doll masking tradition as well as the need to acknowledge all aspects of feminine identity. Additionally, the collection includes statements from artists Marielle Jeanpierre, Karen La Beau, Ruth Owens, Vashni Balleste, and others, expressing their gratitude and inspiration, transformations in their own work, and their unapologetic commitment to not conforming to traditional standards of beauty and style. Ultimately, having the pictorial references, dialogue and the artists’ statements supports and celebrates a spirited, boastful urban tradition.

Each of the Walking Raddy contributors, in a way, serve as curators. They carry on the legacy of introducing newcomers to the New Orleans tradition and pay homage to their artistic forebears. Making their signature mark over a century ago, “walking ‘raddy’ was a flamboyant display of claiming one’s space and body and using improvisational strategies to build an unforgettable character” (103). Embracing and becoming a Baby Doll is more than just simply putting on a costume or suit, it is a rite of passage, a space to be free, a place to belong. As Baby Dolls continue to grow, transform and push boundaries, the bold spirit of these women and men will continue to ‘walk raddy’ each and every Mardi Gras season. So, to answer Vaz-Deville’s question, as long as the Baby Doll continues to dance and reinvent herself, the unruly woman masker will remain relevant.

Grace D. Gipson is a doctoral candidate in the African American Studies program with a designated emphasis in New Media at the University of California Berkeley. She is primarily interested in black popular culture, digital humanities, race and new media. Follow her on Twitter @GBreezy20.