Driving along False River on Louisiana Highway 1, you will see summer homes, boat houses, and cabins nestled close to the water. On the other side, you will see plantation houses dating back to the late eighteenth century. Travelling southeast from New Roads, LA, and just past Oscar, you will see Riverlake Plantation, a house built during the early part of the nineteenth century. The structure looks like other antebellum houses along the road, and passing it, you may not even give it a second glance. However, like all the other big houses that line False River, there are stories of lives that lived, suffered, and perished under the venomous institutions of slavery and Jim Crow under its gaze.

Sugar cane fields, in various stages of production, stretch as far as the eye can see behind Riverlake Plantation, and when the cane stalks reach toward the sky, they become visible. Tucked among the cane fields–about three quarters of a mile from Highway 1–is an acre of land with trees standing on guard. Inside the sanctuary rests the bodies of individuals who lived in Cherie Quarters behind Riverlake Plantation. Some of the graves have names inscribed on them. However, others do not have any identifying markers. Some of the graves remain above ground, as is the practice in South Louisiana, while others sink into the earth, becoming subsumed by the soil and grass. Some leave only an indentation in the earth because they have, over the years, become enveloped by the land.

Every year, on the Saturday before All Saints Day (November 1), people from all over the country gather at this acre of land in South Louisiana to beautify the cemetery and to remember those buried there. Here is also where author Ernest J. Gaines wants to be laid to rest, with the words “To lie with those who have no mark” on his gravestone. With these words, Gaines wants the world to know why he became an author. “I wanted to preserve this place for the people buried back there, ” Gaines once noted, ” because without those people buried back there, I would not be a writer.”

During his trips back to Louisiana in the 1960s, Gaines would visit Cherie Quarters, talk with the people who lived there, and go to the cemetery amidst the sugar cane. At that time, weeds engulfed the acre making it difficult to navigate through the cemetery. Gaines returned home year after year to speak with those who remained and to remember those who had passed on. As the years progressed, he and his wife Dianne worked to save the cemetery and those buried there from impending destruction caused by increased mechanized agricultural production of the fields surrounding the sacred spot. Their efforts to preserve the memory of those interred in the graveyard led to the formation of the Mount Zion Riverlake Cemetery Association.1

This revered acre of land appears in each of Gaines’s novels, along with the church the residents of Cherie Quarters. Jackson Bradley, in Gaines’s first novel Catherine Carmier (1963), struggles with returning home to the quarters after going to school in California. Jackson’s movement away from Louisiana causes him to become disconnected to those who remained, and as he walks around the quarters near the end of the novel, he thinks about that disruption. Walking up to the fence surrounding the cemetery, “he looked through the fence at places where graves ought to be or where he thought they had been. He could not see any graves for the high weeds, and he was not sure that he was looking in the right places.” Jackson continues to stare at the overgrown space, but he cannot distinguish the graves of those buried there. This inability to recognize the resting places of his ancestors and friends causes him to feel uneasy and unsure about his own identity. 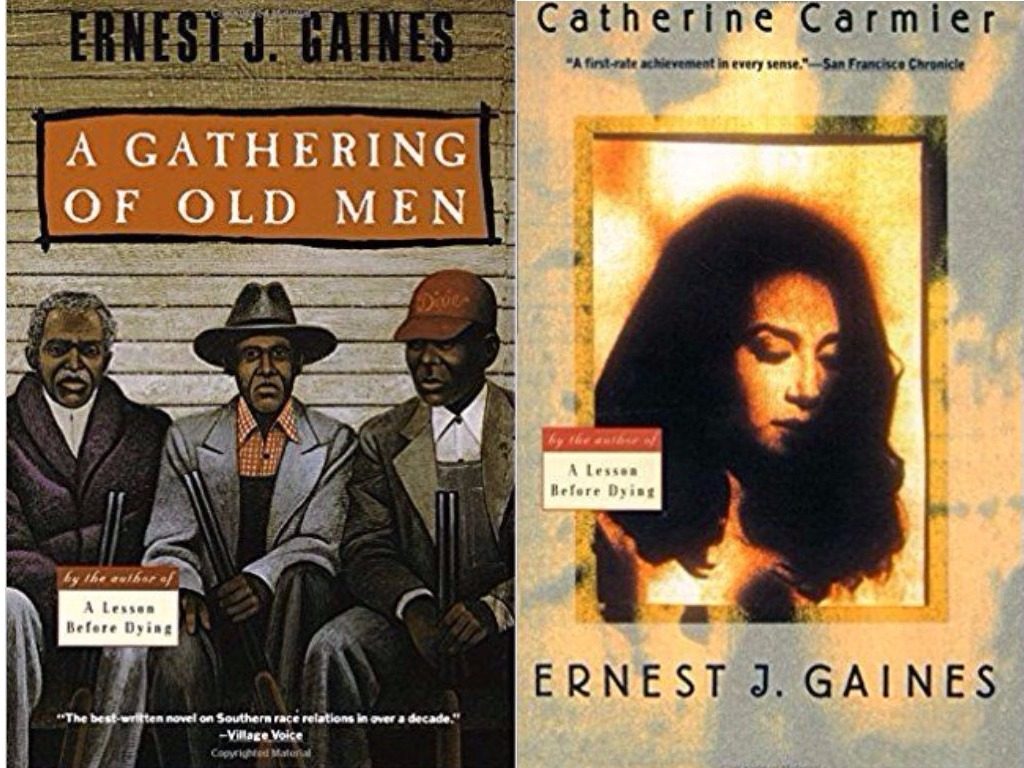 The cemetery plays a much larger role in Gaines’s sixth book, A Gathering of Old Men (1983). Before the men reach Mathu’s house where they will resist the society that keeps them in subjugation, they stop at the graveyard and pay their respects in a scene that Patricia and Milton Rickels compare to individuals partaking of the Eucharist. Here, Grant Bello comments that overgrown grass and weeds covered the graves because “[t]he people usually cleaned up the graveyard if they had to bury somebody, or for La Toussaint [All Saint’s Day].” As the men begin to clean the graves of those that they knew, Grant begins to think about why they had all gathered: “But maybe that’s why we was all there, to do something for the others.” Grant, like Gaines, sees the beautification of the burial ground as a connection to those who came before, as a remembrance and continuation of their presence.

Later, as the men stand outside of Mathu’s house while the white sheriff Mapes tries to get each of them to stop taking the blame for Beau Boutan’s murder, the cemetery serves as the catalyst for those in the quarters to tell their own stories and the stories of those buried beneath the pecan trees nestled amongst the sugar cane fields.2 Johnny Paul gazes down the quarters, past the houses that once stood there, past the gardens that once bloomed, towards the cemetery. Mapes thinks Johnny Paul is staring at nothing, but as Johnny Paul starts to talk about the flowers, the houses, and the people, the old men and women gathered there begin to reflect and visualize the past.

Even though Johnny Paul did not murder Beau, he tells Mapes that he did, and he tells the sheriff that he committed the crime “for them back there under them trees. I did it ‘cause that tractor is getting closer and closer to that graveyard, and I was scared if I didn’t do it, one day that tractor was go’n come in there and plow up them graves, getting rid of all proof that we ever was.” Johnny Paul’s impetus for taking responsibility for Beau’s murder mirrors Gaines’s motivation to write and to maintain the memory of those that lay beneath the canopy of trees.

All along Highway 1, machinery farms the land, and the evidence of the people who worked that land has virtually vanished. Only one of the cabins of Cherie Quarters remains, and it sits buried in overgrown weeds, trees, and grass. Johnny Paul tells Mapes, “they trying to get rid of all proof that black people ever farmed this land with plows and mules,” but he goes on to says, “one day they will get rid of the proof that we ever was, but they ain’t go’n do it while I’m still here.” What remains is the cemetery, preserved and maintained as a reminder of those who came before. The stories of those who lived and worked the land carry on through Gaines’s work.

Writing about his family and Southern myths, historian William Sturkey notes, “My ancestors left behind no memoirs explaining why they left places like North Carolina in the 1890s, Alabama in the early twentieth century, or Arkansas in the 1950s.” The individuals buried in Mount Zion did not leave any written memoirs behind either, and that is why Gaines writes–to tell those stories of what those individuals and countess others endured. He uses his “little postage stamp of land” as a microcosm of the South, slavery, and Jim Crow. The cemetery serves as that reservoir of memory, and that basin does not just pull him, but it pulls countless others back to False River and Riverlake Plantation each year to be “with those who have no mark.”

Comments on “Land, Literature, and Preserving Black History in Louisiana”