loading...
By Josh Myers October 25, 2017 Comments Off on The Still Rejected Strain; or How Black Thought is Enough

It is always necessary to think about what a work is really about, not merely in the sense of its topic, but much more critically, in the sense of what guides the selection of the topic, what determines the decision to pursue it in particular ways, and what assumptions guide the declaration or articulation of its meaningfulness. Unwilling to think of The Crisis of the Negro Intellectual as something more or something other than a work that establishes a historical or sociological claim, many assessments have contributed to what Bobby Wright called the “loneliness” of Harold Cruse. That is, the book’s fundamental question has been unanswered or evaded; perhaps the function of an academic conspiracy of silence, but more likely the product of its unthinkability.1 When it was written fifty years ago, Harold Cruse’s posing of this fundamental question, in a manner of speaking, did not fit the logical boundaries of accepted discourse. It still does not.

It was in the same forum at the Northeastern Illinois University Center for Inner City Studies where Wright’s comments were articulated, that Cruse once again posed the question, a question he argued was fundamental for all political ideologies, but particularly those claiming to advance a radical and/or nationalist orientation: “Is it possible, realistic, and probable that I can achieve what I think I want within the context of this society as it exists right now?” It just so happens that what Black radicals desired, more than anything, was the ability to be free to constitute themselves and their world in ways that white supremacy had precluded. Insofar as society—as it existed— reproduced white supremacy, it would need to be confronted, interrogated, and ultimately transcended. But there was the question of how. 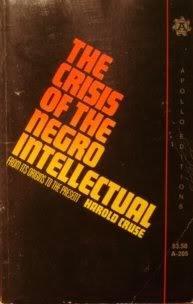 It was a question that Cruse, in Crisis subjected to history, to sociology, and to economic theory, but it—the future of Black folk in this country—was not merely a subject for History, Sociology, or Economics. It was a question that had to be resolved through Black thinking traditions, and part of what made this work dynamic is that it persistently called for a radical insistence on Black thought as enough. It was there, within that rejected strain as Cruse indicates, that we see this radical insistence.

In some important ways, Cruse’s method for thinking about Black intellectual work was consonant with what he desired, it was a model for what it suggested was lacking. Cruse’s critique of those who thought the Black future through a logic of integration—both radical and liberal forms—was of a piece with his critique of what Black Power had not successfully done, and that was to place its artistic and intellectual energies within a categorical and programmatic setting all its own.

It is a crisis of purpose that, today, demands our renewed attention. For in the fifty years hence, the convergence of neoliberal individuation and the erosion of the New Deal state have even further entrenched integration as the teleology of Black protest even as the economic supports for such a view no longer exist. Cruse had in fact predicted as much in his “Postscript on Black Power.” But this is also a moment were the space for the kind of “ethnic” cultural renaissance has receded to the mean of the same neoliberal hegemony that can only conceive of marching toward New York publishing houses, toward Hollywood, toward Broadway, toward industries that have not fundamentally changed, as the way to advance Black representation. It is then no wonder that the results have produced liberal (at best) representations of Black cultural and political life and protest literature that remains less than transformative, housed proudly under the “race” category. A description of our creative class that was also predicted by Cruse:

Having given up their strict claim to an ethnic identity in politics, economics and culture, they haven’t a leg to stand on. They can make no legitimate claims for their group integrity in cultural affairs. They take the illusion of the integrated world of the creative intellectuals as the social reality, and do not know how to function within its cultural apparatus.

In a recently published interview, the late Cedric Robinson and Elizabeth Robinson revealed that the former’s seminal Black Marxism was in part, a response to Cruse.2 Black Marxism’s narration of the development of a radical intelligentsia, however, demonstrated that it had to discover this rejected strain, this Black radical tradition. They did not create it. Intellectuals were products of a culture, from whose authority they imagined the world. Black thought was enough, because it came from Black life.

And this is what was and is unthinkable. Black nationalism is a nationalism that requires Blackness to be rendered as human for it to be comprehensible, let alone politically logical. For far too many the jury is still out when it comes that rendering, and as such the logics of thinking traditions that produce (read: appropriate) Black Studies (or rather Studies of Black people), sees Black nationalism as aberrational or romantic. And Black counter-nationalisms whether in the liberal or Marxist guise are given the imprimatur of real knowledge, real knowing. There are many who study Black nationalism, but few in that number who would see themselves as connected to the tradition. The rejected strain is rejected anew by way of an academic curiosity. This set of arrangements was perhaps the “logical” extension of a Black Studies that never addressed the spirit of Cruse’s fundamental question, or refused to see it as the question; a Black Studies that assumed integration was the only possibility; a Black Studies that reflects the new-old crisis of the Black intellectual.3

That rejected strain, though still rejected, is nevertheless not dead. The aforementioned forum was co-sponsored by a group of Black intellectuals in a formation called the Association of African Historians, who waged war around the very question of whether or not it was possible to build a system of knowledge upon a Black intellectual tradition. Their work created space within the nationalist movement to answer many of the questions raised by Crisis. And in many important ways, they went beyond them. Far beyond.

One of its members, Jacob H. Carruthers often cited Harold Cruse’s evocation of a nationalist tradition, this rejected strain, in order to develop an intellectual genealogy of which his intellectual work was in conversation. As Cruse intimated, that tradition went back to the nineteenth century, but Carruthers would extend it further. It was apparent in all of Black history. The question became how we understand it, how we make sense of its relevance, for now and for the future. Carruthers, Wright, along with Anderson Thompson, Conrad Worrill, Harold Pates, and many others extended these conversations and of their legacies, the African World History Project is evidence of the continued attempt by this rejected strain to think of Blackness as part of something larger than an appendage to another national story, another civilization, another “cultural compulsive.” Combining proficiency in African languages, historiographical methodologies, and philosophy of science, Carruthers’s “intellectual warfare” was one response to the crisis.

The challenge of thinking the meaning of nationalism may lie outside the purview of the academy proper. But this should not trouble us, for that is where it has often lain. The more exacting concern is how and through what philosophical and cultural logics might we rethink that which has been responsible for both the conditions for our miseries and the salves of our pain. For now, the rejected strain provides viable answers to Cruse’s fundamental question, even if still rejected, even if unthinkable in the spaces were so-called true knowledge happens. But that too, should not concern us.

Josh Myers is an Assistant Professor of Africana Studies in the Department of Afro-American Studies at Howard University. His research interests include Africana intellectual histories and traditions, Africana philosophy, critical university studies, and disciplinarity. His current book project is a history of the Howard University student protest of 1989. Follow him on Twitter @ddehewty.