loading...
By Rashauna Johnson March 28, 2017 Comments Off on Slavery, New Orleans, and the Counting Blues

In “Countin’ the Blues,” Gertrude “Ma” Rainey sings, “Layin’ in my bed with my face turned to the wall…Tryin’ to count these blues, so I could sing them all.” The definition of “count” here is ambiguous. It could mean to come to a total number, or, more likely, to weigh their significance. Rainey’s blues have a numerical quality, and they also have a spatial dimension: “Memphis, Rampart, Beale Street, set them free.” The railroad offers “them” an escape from Memphis and New Orleans: “Lord sitting on the Southern, gonna ride all night long/Down Hearted, Gulf Coast, they was all good songs.” Like many sojourners of the African diaspora, she attempts to escape the violence of mass incarceration and the racialized exploitation of cotton production – “Lord, ’rested at Midnight, Jail House made me lose my mind/Bad Luck and [boll] weevil made me think of old Moonshine.” That nighttime ride provided a limited respite: “Lord, going to sleep now, just now I got bad news/To try to dream away my troubles, countin’ these blues.” 1.

Like Ma Rainey, scholars are counting the blues of slavery and its afterlives. “Black labor,” W. E. B. Du Bois writes in Black Reconstruction, “became the foundation stone not only of the Southern social structure, but of Northern manufacture and commerce, of the English factory system, of European commerce, of buying and selling on a world-wide scale; new cities were built on the results of black labor.” The oppressions that troubled the blueswomen and bluesmen of the early twentieth century – racism, capitalism, imperialism – were an extension of a longer history of exploitation, and historians continue to debate the best ways to research, write, and right the story of slavery and its afterlives.

The economic aspect of Du Bois’ analysis has received needed attention in recent years. We have an even deeper appreciation of the ways that the commodification of black people in the slave trade and society undergirded capitalist development. Yet it is equally important to focus on the connection that Du Bois draws between black labor and urban history. In my recent monograph, Slavery’s Metropolis: Unfree Labor in New Orleans during the Age of Revolutions, I argue that this linkage is critical for understanding past and present contests over the place of black people in the city and society. New Orleans, I argue, is a premier example of a city that black labor built, and the book explores how the city developed and modernized in tandem with – and in the service of – chattel slavery. To do this, I take up some of the themes that Ma Rainey describes: the politics of space, migration, incarceration, and staple production as well as the ways that people of African descent managed to sing in an era designed to deepen what would come to be called their blues. 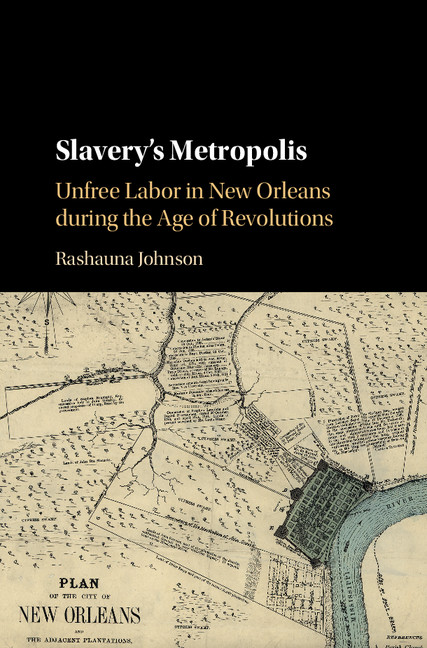 The key claim in Slavery’s Metropolis is that in New Orleans a unified slaveocracy did not conspire to physically contain or isolate enslaved persons; instead, political leaders, slave owners and slaveholders, Anglo-Americans and French Creoles, and free and enslaved persons all contested the best uses and regulation of enslaved mobility. Bondspersons built levees, hauled waste, delivered newspapers, peddled goods, traveled as nursemaids, and played sports for public amusement. In short, enslaved men and women walked the city, not primarily for recreation, but to build the region’s commercial, ideological, and physical infrastructures. This argument shifts the focus from the plantation to situate enslaved men and, significantly, women in a port city and heightens our appreciation of the importance of non-physical means of social control, such as racialized phenotype, for power and social control. More than that, it shows the capaciousness of slaveholders’ prescribed geographies of slavery, sometimes as wide as the Atlantic World, even as enslaved people themselves used the geographic and social connectivity required of them to resist, escape, and survive.

Each chapter uses the place of the enslaved in a particular space or circuit to show how slavery incubated many modern mechanisms of exploitation and control. The first chapter describes the racialized border that immigrants of African descent confronted in Louisiana during the era of the Haitian Revolution. These migrants moved from freedom to slavery when they traveled from the circum-Gulf of Mexico into a territory occupied by the early republic. The second chapter investigates the role of unfree labor in building the infrastructure that allowed the local economy to function. The third chapter investigates the politics of urban amusement. That investigation examines two sites–the mythologized Congo Square and the largely forgotten the racquette field–to illuminate the opportunities and burdens of the public performance of enslaved fun. The fourth chapter charts the gradual segregation of the local jail and its chain gangs that completed many of the tasks of the public works. And the final chapter explores the migration of a handful of self-liberated men, women, and children from New Orleans and surrounding plantations to Trinidad in the aftermath of the War of 1812. With this “freedom journey,” these self-liberated persons became part of a free community, but they also became subject to labor exploitation in a way that presaged emancipation struggles across the Americas.

Slavery’s Metropolis is significant for several reasons. It insists upon the presence and importance of enslaved New Orleans beyond the slave market. For far too long, the history of slavery – and enslaved people – in the Crescent City has been erased. Fortunately, thanks to local public historians and a growing body of scholarship, enslaved New Orleans is getting its due. This work contributes to that effort. This book also reminds us of the importance of labor in the history of slavery and modernity, and especially the ways that the mobility and heterogeneity often associated with freedom could in fact be the work of enslavement. And the republicanism and capitalism so deeply associated with modern progress were the engines by which slavery expanded in New Orleans and across the South. Ultimately, the fact that so many of the things often associated with freedom were in fact constitutive of bondage is a sobering reminder that meaningful freedom is a hard-fought demand.

Rashauna Johnson is an associate professor of history at Dartmouth College, where she teaches courses on slavery, the US and the world, and gender in the African diaspora. Her first monograph, Slavery's Metropolis, was awarded the 2016 Williams Prize by The Historic New Orleans Collection and the Louisiana Historical Association. She is currently at work on a family history of slavery and migration in rural Louisiana.