loading...
By Skyler Gordon April 19, 2019 Comments Off on American Founders: A New Book on the African Diaspora and New World Freedom

This post is part of our blog series that announces the publication of selected new books in African American History and African Diaspora Studies. American Founders: How People of African Descent Established Freedom in the New World was recently published by NewSouth Books.

The author of American Founders: How People of African Descent Established Freedom in the New World is Christina Proenza-Coles. She has been a lifelong student of American culture and history in Miami, New York, Havana, and Charlottesville. She holds a dual doctorate in sociology and history from the New School for Social Research in New York City. She completed a BA in Psychology from Swarthmore College. From 2014 to 2011, she was an assistant professor of the Atlantic World/African Diaspora at Virginia State University. Christina’s ancestors include Daughters of the American Revolution, Portuguese conversos, Cuban pirates, a Confederate sergeant, and a governor of Alabama. Her work has appeared in various online publications and edited collections, including Lapham’s Quarterly, The Daily Beast, The Civil War and Reconstruction Era (eds. Brain Johnson and Edward Blums); and Voices from Within the Veil (William Alexander, ed). Follow her on Twitter @ProenzaColes. 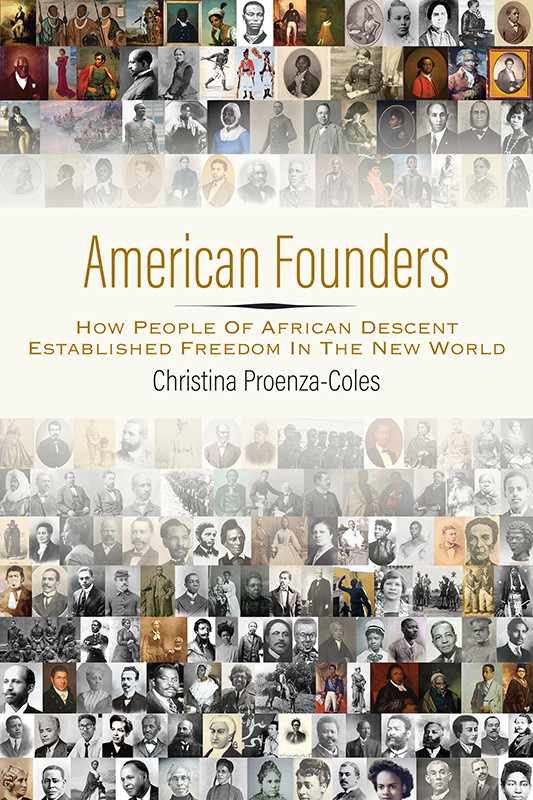 American Founders reveals men and women of African descent as key protagonists in the story of American democracy. It chronicles how Black people developed and defended New World settlements, undermined slavery, and championed freedom throughout the Americas from the 16th through the 20th century.

American Founders is a much needed, well researched, original contribution to studies of Africans in the Americas. The book’s breadth of time and place reveals the largely unknown, indomitable, and courageous struggles for freedom of African-descended peoples and their enormous contributions to the arts and sciences and the wealth of the Americas. – Gwendolyn Midlo Hall, Professor Emeritus of Latin American and Caribbean Studies, Rutgers University

Skyler D. Gordon: What type of impact do you hope your work has on the existing literature on this subject? Where do you think the field is headed and why?
Christina Proenza-Coles: My hope for the impact of American Founders: How People of African Descent Established Freedom in the New World is twofold. My first intention is to provide a broad and accessible narrative that illuminates how men and women of color fundamentally shaped the development of the Americas—and the evolution of democracy in particular—from 1500 to 1950. Thus American Founders is a synthesis of the work of scholars who have been documenting the history of African Americans and the African Diaspora for centuries. As a compilation that endeavors to weave together many threads, American Founders is indebted to and built upon the body of knowledge crafted by the scholars of African descended people in the Americas. On the other hand, people of African descent were omnipresent and foundational to the development of the Americas. They were often on the forefront of military, political, scholarly, and cultural efforts to put American ideals—the rights and duties of universal citizenship—into practice. As such, I tried to make this book accessible to readers outside of the academy in the hopes it might encourage non-specialists to rethink our national narrative and the history and meaning of American freedom more generally. This is a history that pertains to all Americans because everyone who lives in America today lives in a society that has been shaped by the actions of these American Founders.
Judging from the array of excellent scholarship that proliferates every year documenting the influence and endeavors of men and women of African descent, the field of African American studies, which has a long and rich history, appears increasingly productive and robust. I believe that non-specialists are coming to recognize the massive contributions of Americans of African descent to our national story, despite the Americas’ foundation on slavery and its violent fallout that continues to shape the present. Moreover, I hope that increasing numbers of Americans will recognize that the history of American slavery and racial discrimination is the history of all Americans. These institutions and the practices and ideologies that undergirded them have shaped the lives of all Americans and continue to do so, from the oldest residents of the nation to the newest. In this sense I see the field of African American history becoming more central to the field of history more broadly. An understanding of African American history is essential to an understanding of American history.
Share with a friend:
Share on Facebook Share
Share on TwitterTweet
Share on LinkedIn Share
Send email Mail
Print Print
Copyright © AAIHS. May not be reprinted without permission.

Skyler D. Gordon is a PhD student in the Department of History at Princeton University. His research interests include twentieth-century African American history, the history of the Black Left and black internationalism. Follow him on Twitter @skydangor.