loading...
By Dan Berger December 16, 2017 Comments Off on Black Radicalism and Voices of Resistance

First published at the end of 1971, Angela Davis’ If They Come in the Morning is the kind of urgent tract often produced by active defense campaigns. The mass-market anthology emerged out of the developing effort to, as organizers at the time put it, “free Angela Davis and all political prisoners.” While the campaign ultimately achieved its first goal but not its second, the book remains a powerful artifact of how diverse Left movements might coalesce in the fight against state repression and political imprisonment.

The book features several essays written by Davis, then a promising young philosopher and Black Communist sitting in a jail cell facing the death penalty for allegedly having supplied the guns 17-year-old Jonathan Jackson used to free three San Quentin prisoners from a Marin County courthouse the previous summer. In addition, the book profiles the cases of numerous other political prisoners: Black liberationists, war resisters, Puerto Rican Nationalists, and others.

Reading If They Come in the Morning four and a half decades later, one is struck by at least two discordant realities. The analysis put forth by Angela Davis, George Jackson, Ruchell Magee, and the book’s many other incarcerated contributors still resonates. Forged largely in California prisons, the book’s moral vision and political clarity remain urgent in today’s era of racist violence, upward wealth distribution, and carceral expansion.

Not surprisingly, James Baldwin’s essay—first published in the New York Review of Books as an open letter to Davis—resonates with particular grace. “One might have hoped that, by this hour, the very sight of chains on Black flesh, or the very sight of chains, would be so intolerable a sight for the American people, and so unbearable a memory, that they would themselves spontaneously rise up and strike off the manacles,” Baldwin writes in the opening of his essay, among the greatest examples of arts and letters the twentieth century has to offer. “But, no, they appear to glory in their chains; now more than ever, they appear to measure their safety in chains and corpses.” Baldwin writes of America in 1971, yet his diagnosis is no less fitting for the decades of brutal domestic and global warfare that the United States has pursued since that time—of which mass incarceration is perhaps its signal representation on the home front. 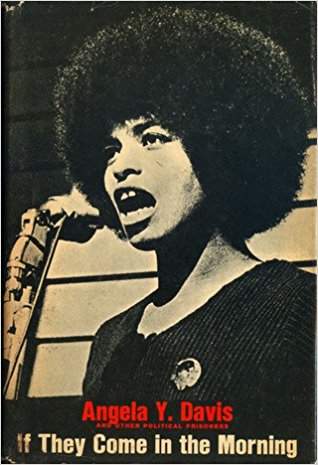 And yet, the book is also of its moment. Its appeals for broad Left unity reflect the uneven attempt by partisans of two of the most persecuted organizations in U.S. history—the Communist Party and the Black Panther Party—to unite in defense of political prisoners. The book was prepared “at a feverish pace,” recalls coeditor Bettina Aptheker in her memoir, Intimate Politics, at the behest of a British publisher. Half of the book concerns updates on particular cases of political prisoners that are long past—for reasons joyous and dreadful. Angela Davis and Bobby Seale and Ericka Huggins and Lolita Lebron are all free, their liberation won by the kind of hard-fought campaigns that produced If They Come in the Morning.

Many others, however, remain behind bars. Ruchell Magee, Davis’s one-time co-defendant, remains in prison after more than fifty years. So too does John Cluchette, the only surviving Soledad Brother; he was released in the late 1970s, arrested again in the early 1980s on a separate case and yet California officials use his association with Jackson and the political rebellions of the 1970s as an excuse for his ongoing imprisonment. Fleeta Drumgo and Hugo Pinell and Huey Newton are dead; Pinell was stabbed to death in a California prison in 2015. H. Rap Brown went free, converted to Islam, and changed his name to Jamil Al-Amin only to be arrested in 2000 for the death of a Georgia sheriff. He was sentenced to life without the possibility of parole, which he has served in the mini-Guantanamos that dot the American carceral landscape.

If They Come in the Morning exudes the confidence of leftist movements growing amidst widespread repression. There is, Davis writes in her brilliant essay “Political Prisoners, Prisons, and Black Liberation” that she wrote in the Marin County Jail and which begins the book, “an almost instinctive affinity binds the masses of black people to the political prisoners.” Yet that “instinctive affinity” failed to extend en masse to other political prisoners after her acquittal in 1972. There were certainly thriving defense campaigns for Assata Shakur and Sundiata Acoli, Safiya Bukhari, Kuwasi Balagoon, Mutulu Shakur, and other revolutionaries arrested throughout the 1970s and beyond. Likewise, the mid-1970s campaigns to free Joan Little, Inez Garcia, Yvonne Wanrow, and Dessie Woods amplified the struggles of women of color against the criminal justice system. But the dedicated supporters of these political prisoners waged a thankless battle as moderate and liberal organizations succumbed to the “tough on crime” ethos characterizing the advance of austerity politics.

The campaign to free Angela Davis was a remarkable victory accomplished by transnational solidarities undermining the reach of the U.S. carceral state. Yet in many ways her freedom is an outlier. The decades after her release saw an unprecedented expansion in the number of people incarcerated, the length of time they served, the amount of prisons built. Most of those swelling the ranks of American prisons were not political prisoners in the way Davis and others profiled in If They Come in the Morning were. They are victims of political circumstance rather than avatars of “political boldness,” as Davis described incarcerated dissidents. Yet an increasing number of them have also expressed their own boldness in a successive series of hunger and labor strikes that have rocked American prisons, jails, and detention centers since 2010.

Taken from Baldwin’s letter to Davis, the book’s title expressed the expansive reach of state repression. The larger passage from which the title comes is a call for mass direct action on behalf not only of Davis but all of us who risk becoming victims of state violence. “If we know, then we must fight for your life as though it were our own—which it is—and render impassable with our bodies the corridor to the gas chamber. For, if they take you in the morning, they will be coming for us that night.”

Rereading the book in an age of mass incarceration and incipient fascism reminds us that history does not move in linear directions. Davis won her freedom in the great victory of solidarity presaged in Baldwin’s letter. And yet even a passing survey of American political culture must conclude that “they” did indeed come in the morning, afternoon, and night in the decades since. They came, quite literally, at pre-dawn and at dusk and at many points in between.

Written in the haste of the campaign for Davis’s freedom, and the freedom of dozens of others whose experiences were highlighted by the global attention paid to Davis, If They Come in the Morning does not provide a manual to the slow-and-steady work of developing what organizer Mariame Kaba has more recently dubbed participatory defense campaigns. The book must therefore be read alongside the explosion of writings by and about today’s political prisoners and antiprison movements. As Davis herself has noted in recent years, such an intergenerational exchange requires far greater attention to the struggles of women and queer and transgender people in prison than can be found in this 1971 text.

In that way, the republication of If They Come in the Morning is an invitation to pick up the work documented in the book. It is not just the gas chamber but the prison graveyard whose corridors we must render impassable. Longtime political prisoners like Herman Bell and Leonard Peltier, former members of the Black Panther Party and the American Indian Movement respectively, have been caged for more than four decades with intense police pressure to keep them in prison forever. Survivors of gender violence remain incarcerated or under strict state supervision. Meanwhile, the Department of Justice wants to send 194 people to prison for 60 years for protesting the inauguration of Donald Trump, and five antiracists face charges for toppling a Confederate statue in North Carolina. If the book means anything at all, it means showing practical solidarity—with funds, with phone calls, with protest, with revelry, with rage—to all those in the crosshairs.

Or, as Davis herself put it in the book, the “masses of people in this country have a real, direct, and material stake in the struggle to free political prisoners, the struggle to abolish the prison system in its present form, the struggle against all dimensions of racism.”

*Published in collaboration with Verso Books. Click here for more details on the book.