loading...
By Dan Berger June 3, 2017 Comments Off on “Thinking Black” Against the Carceral State: Angela Davis and Prisoner Defense Campaigns

The stirring directive sounded like the denouement of a legal thriller: “I am going to ask you, if you will, for the next few minutes to think Black with me—to BE black,” famed defense attorney Leo Branton instructed an all-white California jury at the outset of his closing statement. “Don’t worry. When the case is over, I am going to let you revert back to the safety of being what you are. You only have to be Black and think Black for the minutes that it will take for me to express to you what it means to be Black in this country.”

Having temporarily empaneled an all-Black jury, Branton then delivered a stirring indictment of antiblack racism, from the Middle Passage to the Fugitive Slave Law, Dred Scott decision, and Jim Crow. Hours into his speech, Branton “relieve[d]” the jury “of that responsibility” of Blackness. Then he read a poem celebrating Black love as a redemptive act. By the time he closed, several jurors had tears in their eyes. Three days later, on June, 4, 1972, Branton’s client was acquitted on all counts: Angela Yvonne Davis was free.

Branton’s theatrical flair capped off one of the highest-profile political trials of the era. Its cinematic conclusion would be inverted decades later in the dramatic climax of the 1996 film A Time To Kill. There, an attorney played by Matthew McCounaughy invites the juror to empathize with a Black girl sexually assaulted by white racists by imagining that she is white. Yet it was thinking through Blackness rather than whiteness that held the key to Davis’s freedom. Today, Davis is rightly known as one of the world’s leading theorists of prison abolition and Black feminism. A foundational figure in Black Women’s Studies, she is a Distinguished Professor Emerita at the University of California Santa Cruz. She has lectured at universities and rallies around the world, including at the 2017 Women’s March, and authored several books of cultural studies, political theory, and activism.

None of that was a given in 1972, when Davis exited the Palo Alto courtroom into the cheering throngs celebrating her acquittal. The 28-year-old philosopher grew up in a Birmingham neighborhood so targeted by the Ku Klux Klan that it became colloquially known as Dynamite Hill. She studied in France, Germany, and the United States, earning her Ph.D. with Herbert Marcuse, a German Jewish expatriate from the noted Marxist Frankfurt School. Davis first achieved public notoriety in 1969 when an FBI informant revealed her membership in the Communist Party and governor Ronald Reagan moved to fire her from teaching in the University of California system. She ended up delivering her opening class to packed audiences of students, faculty, and community members with the arresting title of “Lecture on Liberation.”

While Communism temporarily cost her a job, her support of prisoners almost took her life. As a member of an all-Black cell of the Communist Party, Davis began organizing to free the Soledad Brothers. John Clutchette, Fleeta Drumgo, and George Jackson were Black prisoners charged with killing a Soledad prison guard, allegedly in retaliation for the death of three other Black prisoners. The Soledad Brothers, like an increasing number of California prisoners in the 1960s and 1970s, were working class Black men serving lengthy sentences for petty crimes. Davis grew especially close with George Jackson, and his 17-year-old brother Jonathan became her bodyguard in response to the barrage of death threats she received. On August 7, 1970, Jonathan Jackson used guns she had legally purchased in the storming of a California courtroom. Jackson was killed along with two San Quentin prisoners who joined his effort and a judge they had taken hostage. Fearing for her life, Davis fled and was placed on the FBI’s Ten Most Wanted List. In her two months underground, police around the country stopped Black women with Afros thinking they might be Davis. Some women adopted the hair style in solidarity with Davis. 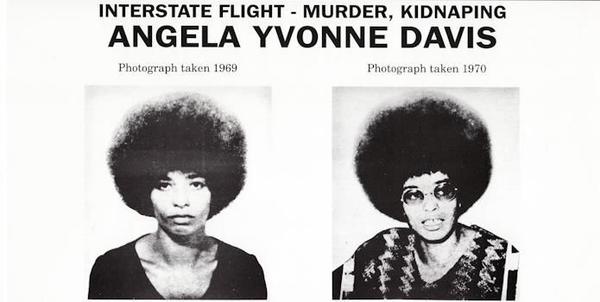 Davis was charged with kidnapping, conspiracy, and murder. Prosecutors alleged that Davis was so in love with George Jackson that she sacrificed his brother in a foolhardy plan to free prisoners. While such claims are laughable, they had traction. Even some who supported Davis, such as the Rolling Stones, ascribed to this racist idea of Black love as equal parts foolish and violent.

For her part, Davis refused such cartoonish notions of who she was and the movements she represented. Instead, she spent her time in jail refusing the terms of imprisonment itself. In an interview conducted at the Marin County Jail, a journalist asked her why she advocated violence. Davis refused the question. Violence, she explained, was coming of age amidst Klan bombings and being regularly harassed by police as an adult walking down the street. “That’s why, when someone asks me about violence, I just find it incredible,” Davis explained with calm incredulity, “because what it means is that the person who is asking that question has absolutely no idea what Black people have gone through, what Black people have experienced in this country since the time the first Black person was kidnapped from the shores of Africa.” The journalist, like so many others, was unable to “think Black.”

Surveying the carceral state from her jail cell in 1971, Davis warned that the racism of American prisons signaled an incipient form of fascism. “Fascism is a process, its growth and development are cancerous in nature,” she wrote in one of her most famous essays from that period. “While today, the threat of fascism may be primarily restricted to the use of the law-enforcement-judicial-penal apparatus to arrest the overt and latent revolutionary trends among nationally oppressed people, tomorrow it may attack the working class en masse and eventually even moderate Democrats.”

The idea that prisons represented the cutting edge of American brutalism was an article of faith among radical prisoners. Imprisoned intellectuals cast themselves as the canaries in the coal mine of a spike in racist state violence that would harm the country overall. And they were right. At the time Davis wrote that essay, American prisons held about 200,000 people, with another 50,000-plus in jails, at a rate of 161 people incarcerated per 100,000 residents. By the time the incarceration rate reached its height in 2007, that number had increased to 767 people locked up per 100,000 people for a staggering and unprecedented total of more than 2.3 million people incarcerated. Millions more are denied access to basic services and civic rights—like voting—as a result of their conviction record.

Seen in that light, Davis’s acquittal marks an interregnum: a dramatic victory at the height of the prison movement, her acquittal coincided with the rise of mass incarceration. Within a year of Davis’s release, incarceration rates in California and around the country began their meteoric climb, which have yet to be significantly dented or reversed. Ruchell Magee, her onetime codefendant, remains imprisoned after more than 50 years. So do a number of other former members of the Black Panther Party and other radical activists from the period.

What saved Davis was that masses of people around the world accepted the invitation to “think Black.” In particular, the global defense campaign that mobilized around the demand to “free Angela Davis and all political prisoners.” Through no fault of her own, Davis enjoyed much more support than other political prisoners. No one else could have united the diverse figures who came together in support of Angela Davis in the early 1970s. As a well-known activist, professor, and member of the Communist Party, a Black Marxist cultural critic and protofeminist, her case garnered support from leftists around the world. Communist and other leftwing and anticolonial movements had mobilized periodically since the 1930s to spare Black American activists railroaded in racist trials. Within the United States, her case united liberals, radicals, and civil libertarians on a scale not seen in decades.

Davis remained committed to the grassroots movements that had freed her. After her acquittal, she led an effort to continue mobilizing a broad-based defense campaign against the growing carceral state. The National Alliance Against Racist and Political Repression was a notable, and thus far understudied, initiative. But it was no match for the rising tide of domestic warfare signaled by “law and order.” More recently, she has participated in diverse women of color formations, cofounded the prison abolition organization Critical Resistance, and theorized the connection between feminism and abolition and transnational solidarity, especially Palestinian self-determination.

For Davis and other prison abolitionists in the early 1970s, “thinking Black” against the carceral state was an expansive claim. “Thinking Black” meant understanding the linked fates of oppressed and marginalized people. It was an invitation for everyone, including the all-white jury deciding her fate, to affirm their own humanity against institutions that degrade and destroy. “We are not interested in race and gender (and class and sexuality and disability) per se, by themselves,” Davis explained in a 2009 talk, “but primarily as they have been acknowledged as conditions for hierarchies of power, so that we can transform them into intertwined vectors of struggle for freedom.”

The campaign to free Angela Davis illuminates how prisoner defense campaigns are foundational components of broader freedom struggles. Contemporary defense campaigns must contend with a far more repressive penal state than existed in the 1970s. Yet they continue: fundraising for Bresha Meadows, a Black teenager who defended herself and her family from her abusive father; supporting the more than 200 people arrested protesting the inauguration of Donald Trump; protesting the abusive conditions at Folsom prison, where prisoners have launched a hunger strike, and at the California Institution for Women, where women are being driven to suicide at staggering rates. In these and numerous other such efforts, “thinking Black” against the carceral state reanimates the meaning of freedom.