Far too often, the South, and especially the Black South connote backwardness in the imaginations of scholars and activists alike. This regionalism is treacherous not only because it reproduces racialized and gendered tropes of backwardness and quiescence, but also because it is so firmly out of tune with a rich and dynamic tradition of black political organizing in the region. And this organizing has fundamentally shaped the possibilities for transformation in the North and West.

The South has always been the center of Black life, culture, and politics in the United States, despite the disavowal of those removed by choice or by force. This will be ever more the case as Black communities follow broader trends in post-1970 sun-belt migration and as the range of generations between baby boomers and millennials “return.” 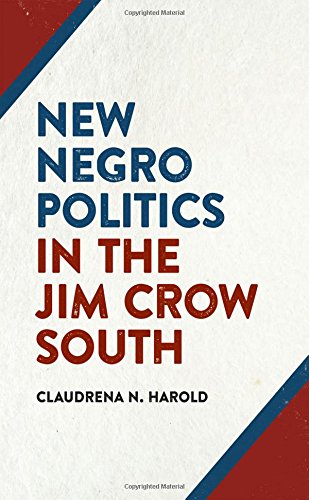 This is where Claudrena Harold’s stunning and concise new book picks up. Harold invites us to think critically about our inherited wisdoms about the locus of Black politics and the possibilities for new forms of labor, political, and intellectual struggle in our own moment. In the unassumingly titled New Negro Politics in the Jim Crow South, Harold builds on her first book about Garveyites in the South’s coastal cities, as well as three films about Black intellectuals and student activists based at the University of Virginia after integration, to recover the electrifying organizing work of Black southerners in the period between the World Wars.

Harold deftly demonstrates the ways that Black southerners configured a dynamic politics that did not adhere to the rigid distinctions common in other regions. Harold examines how activists and organizers from across the South, ranging from Newport News, Virginia to New Orleans, Louisiana moved between labor unions, Garvey’s Universal Negro Improvement Association, the Brotherhood of Sleeping Car Porters, the NAACP, and other organizations. Harold shows how these activists and organizers utilized a variety of tactics within a shifting industrial landscape to combat white supremacy and violence, racial capitalism, and abandonment by the state in the aftermath of the 1927 flood.

While Harold’s entire book is informative and fresh, this scholar’s most captivating chapter is the sixth chapter. Titled “New Negro Southerners,” it chronicles the efforts of James Waldo Ivy and Thomas Lewis Dabney. As Harold demonstrates, these two Virginia Union University trained intellectuals belied the general characterization that New Negro discourse shifted primarily from radical politics to a kind of cultural romanticism with the onset of the Harlem Renaissance. Both of these intellectuals, in their own distinctive ways, continued to press for a fully inclusive industrial democracy, primarily through their writing in outlets like the Modern Quarterly, The Messenger, and the Southern Workman.

Unlike many of their New York based counterparts, who viewed the emergence of white southern literary liberalism in the period as the basis for a different South, Ivy and Dabney viewed this political perspective as naïve and cautioned Black communities to recognize the resiliency of white supremacy, even under a liberal guise. As Harold argues, Dabney and Ivy were committed southerners, and despite the appeal by other intellectuals and organizers for them to relocate to urban North, both maintained life in the South in the interwar period. This connection and commitment fundamentally shaped their outlook. For example, in two pieces for the Southern Workman, Dabney chronicled the explosion in rural conferences and the growth of county training schools for Black people as part of a rising tide of activism in the southern countryside that would supersede the work of liberal white New South writers in transforming the region.

Harold also uses this chapter to re-center the historically Black, Virginia Union in its role of creating intellectuals like Ivy and Dabney who were committed to sophisticated analyses of race and class in politics. In addition to partaking in the existing political culture at Union, especially its campus NAACP chapter, Dabney and Ivy co-founded their own on-campus newspaper the Critic in which they watered their classmates’ irreverent spirit in the liberal atmosphere at Union in the early 1920s. Far from the bastion of political conservatism often assigned to HBCUs in this period, Union’s rich intellectual atmosphere encouraged both to pursue active roles in the intellectual assault on the status quo.

In total, Harold’s work provides a critical injection of sophisticated political action to the blossoming field of southern studies as well as a good dose of South-centered history to Black Studies and History. In so doing, Harold provides a solid history of Black southern radical politics, in its various configurations, that predates the histories of formal civil rights histories and that thickens our understanding of the preexisting activists networks and infrastructures upon which mid-twentieth century movement work built.

This book unquestionably adds to our broader sense of the New Negro Movement, taking it beyond the comfortable borders of the urban North into the messier field of operation in the South. This history is highly readable and should be read by contemporary activists and organizers doing their work in the South. New Negro Politics in the Jim Crow South fleshes out the legacy of broad and dynamic fronts against racism and worker exploitation in what is often dismissed as the nation’s retrograde region.

J.T. Roane is the McPherson/Eveillard Postdoctoral Fellow and Lecturer in Africana Studies at Smith College. He received his PhD in 2016 from Columbia University in History and is also a 2008 alumnus of the Carter G. Woodson Institute at the University of Virginia. Roane is currently at work on a manuscript titled “Sovereignty in the City: Black Infrastructures and the Politics of Place in Twentieth Century Philadelphia.” Follow him on Twitter @JTRoane.