loading...
By Ibram X. Kendi November 23, 2016 Comments Off on The Art of Life: A New Book on Black Lives in Apartheid South Africa

This post is part of a blog series I am editing, which announces the release of selected new works in African American and African Diaspora History and Studies. The Art of Life in South Africa was recently released by Ohio University Press.

The Art of Life in South Africa is Professor Magaziner’s second book. His first, The Law and the Prophets: Black Consciousness in South Africa, 1968 – 1977, was published in 2010. The Law and the Prophets was a study of the theological basis of the radical politics that became known as the Black Consciousness Movement. Professor Magaziner is currently working on his third book project, which will be a history of radical architecture and planning in 1960s and 1970s Africa. 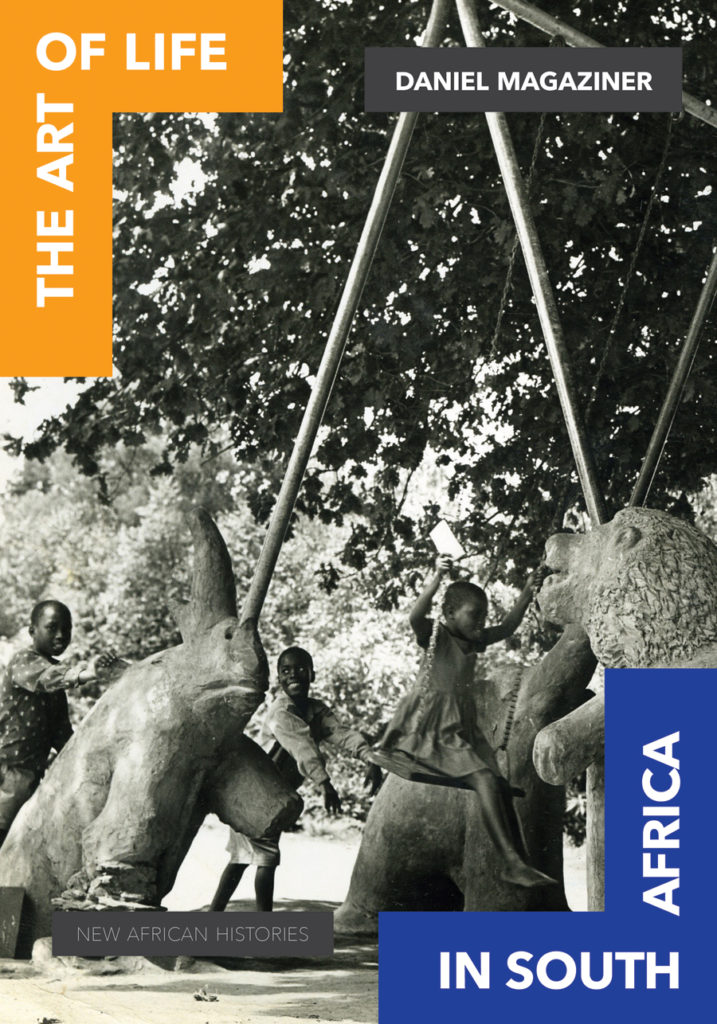 From 1952 to 1981, South Africa’s apartheid government ran an art school for the training of African art teachers at Indaleni, in what is today KwaZulu-Natal. The Art of Life in South Africa is the story of the students, teachers, art, and politics that circulated through a small school, housed in a remote former mission station. It is the story of a community that made its way through the travails of white supremacist South Africa and demonstrates how the art students and teachers made together became the art of their lives.

Daniel Magaziner radically reframes apartheid-era South African history. Against the dominant narrative of apartheid oppression and black resistance, as well as recent scholarship that explores violence, criminality, and the hopeless entanglements of the apartheid state, this book focuses instead on a small group’s efforts to fashion more fulfilling lives for its members and their community through the ironic medium of the apartheid-era school.

There is no book like this in South African historiography. Lushly illustrated and poetically written, it gives us fully formed lives that offer remarkable insights into the now clichéd experience of black life under segregation and apartheid.

“The Art of Life in South Africa is a richly suggestive and moving contribution to South African intellectual history. Weaving in a highly imaginative way the two concepts of life and art, Magaziner opens unique pathways for research in the historical sociology of the object-worlds South Africans invented, created and inhabited during the long twentieth-century. Written with extraordinary clarity and precision, this book will appeal to anyone curious about new trends in the historiography of culture.” ―Achille Mbembe, author of Critique of Black Reason

Ibram X. Kendi: What are the principal findings or arguments of your book? What do you hope readers take away from reading it?

Daniel Magaziner: The Art of Life in South Africa is ostensibly the history of the Ndaleni Art School, which was the apartheid government’s school for the training of black art teachers between 1951 – 1981. Art was a mandatory subject for African students under the white supremacist government’s policy of Bantu Education (as it had been during the segregationist Union of South Africa’s educational systems beforehand). The Ndaleni school was intended to supply government schools with trained teachers. The Art of Life tells those teachers’ stories as well. It is a social biography of a group of people who gathered together at an old mission station to study art and teaching – incongruous activities from deep within apartheid, and more incongruous still for being under the auspices of the very white supremacist government that delimited the range and scope of black intellectual life.

And yet, my research revealed that in general, these teachers lived remarkable lives, dedicated to the cultivation of beauty in a time and place commonly understood to be denuded. Which is not to say that it was easy; far from it. Instead, The Art of Life argues that beauty exists only in dialogue with reality, which in South Africa meant compromise unto collaboration, a constant struggle with material limits and the intensive labor with the self in order to develop the vocabulary for expressing one’s point of view. The circumstances were exceptional, but my contention is that when we get past heroic narratives of artistic genius in South Africa and beyond, we might find stories of the careful cultivation of creativity and quiet triumphs, everywhere.

Most self-conscious intellectual history in South Africa (my previous work included) has dwelt only on those thinkers who occupied positions of relative privilege (as university students, for example) and spun theories of national becoming (I’m thinking of work on people like Robert Sobukwe and Steve Biko). My contention in The Art of Life is that intellectual history needs to be more democratic than that; there were thinkers in other spaces, who occupied their minds with issues other than ‘the Struggle’ as conventionally understood. Their struggles were multiple and on a smaller scale, but they were nonetheless struggles, requiring the interventions and creative resolutions of thinking peoples.

After establishing the logic and philosophical tasks of art education both before and during apartheid (as well as globally in the interwar period), I focus intently on the experience of the Ndaleni education itself. I use the archive to trace the students who came to the school to become art teachers and I follow their journeys and careers. Ndaleni was a residential school, meaning students left their families and communities for a year of intensive study. The book’s central chapter analyzes what that year looked like–what they learned, how they practiced and what resulted. Their transformed ‘selves,’ I argue, were works of art in society. But, much as art objects are transformed by their encounters with external forces, so too were art teachers buffeted and transformed by the world they reencountered elsewhere in South Africa – the world of racism, corruption and violence. The book’s final chapters dwell on art teachers’ efforts to maintain a space for beauty and creative possibility in a time and place that only sporadically rewarded their efforts. These are not necessarily ‘heroic’ stories; they are not triumphant in the end. But I hope my readers will find them to be familiar stories about people’s everlasting efforts to preserve possibility and light amidst prevailing darkness. And yes, I write that last line thinking about the recently concluded American election.