This post is part of my blog series that announces the publication of selected new books in African American History and African Diaspora Studies. Bound in Wedlock: Slave and Free Black Marriage in the Nineteenth Century was recently published by Harvard University Press. 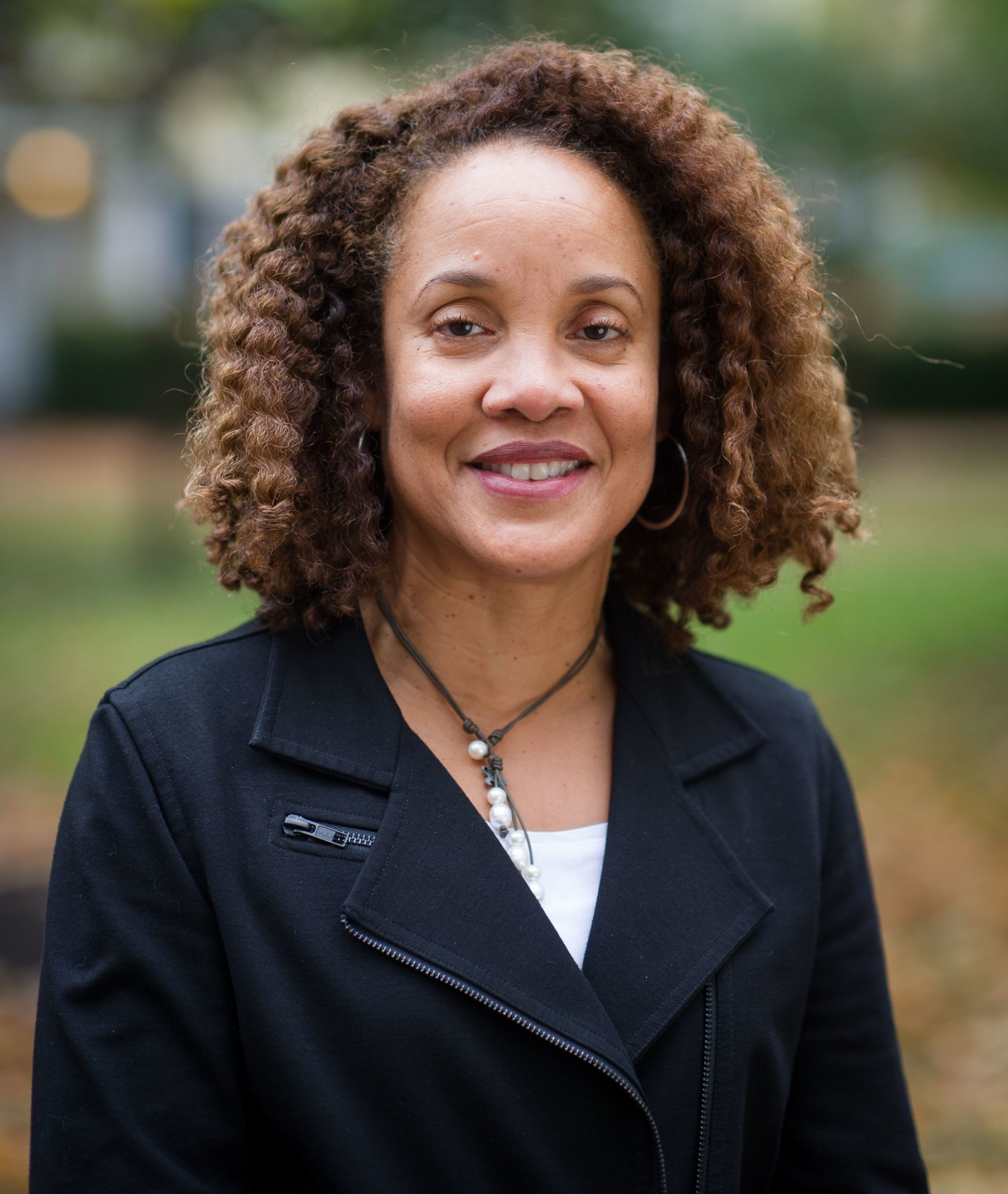 The author of Bound in Wedlock is Tera W. Hunter, Professor of History and African American Studies at Princeton University. Her work specializes in African-American history and gender in the 19th and 20th centuries. Her research has focused on African American women and labor in the South during that period. Her first book, To ‘Joy My Freedom: Southern Black Women’s Lives and Labors After the Civil War, focuses on the experiences of working-class women, especially domestic workers, in Atlanta and other southern cities from Reconstruction through the 1920s. The book won several awards including the H. L. Mitchell Award in 1998 from the Southern Historical Association, the Letitia Brown Memorial Book Prize in 1997 from the Association of Black Women’s Historians and the Book of the Year Award in 1997 from the International Labor History Association.

A native of Miami, Professor Hunter attended Duke University where she graduated with Distinction in History. She received a M.Phil. in history from Yale University and a Ph.D. from Yale. Professor Hunter has received numerous fellowships and grants including a Mary I. Bunting Institute fellowship from the Radcliffe Institute for Advanced Study at Harvard University from 2005 to 2006, a Rockefeller Foundation Humanities Fellowship from the Center for Research on Women at the University of Memphis from 2001 to 2002, and a Smithsonian Institution Postdoctoral Fellowship at the National Museum of American History from 1993 to 1994. 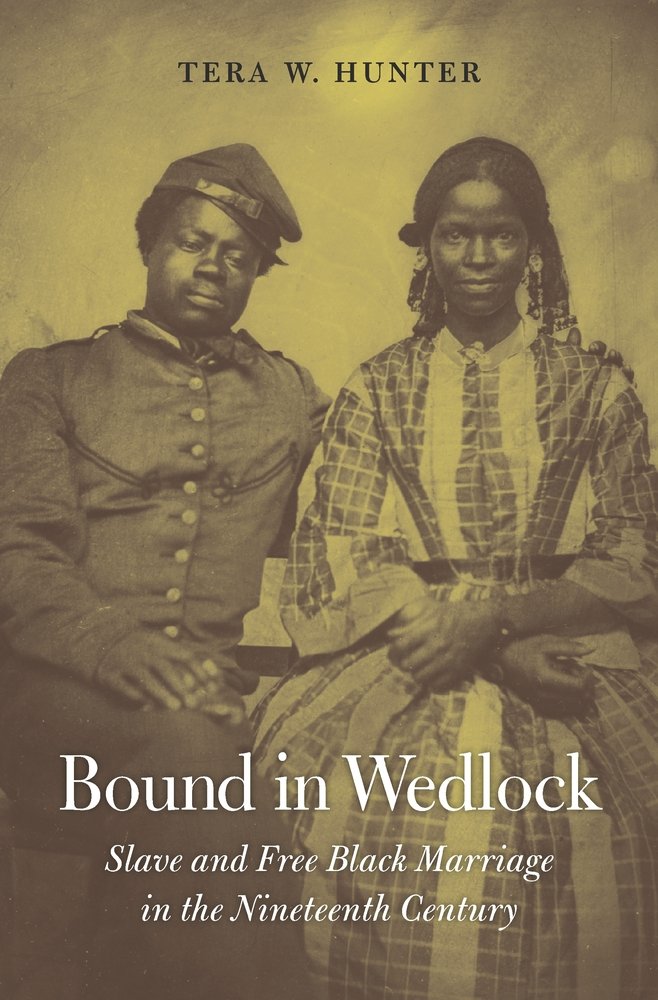 Americans have long viewed marriage between a white man and a white woman as a sacred union. But marriages between African Americans have seldom been treated with the same reverence. This discriminatory legacy traces back to centuries of slavery, when the overwhelming majority of black married couples were bound in servitude as well as wedlock. Though their unions were not legally recognized, slaves commonly married, fully aware that their marital bonds would be sustained or nullified according to the whims of white masters.

Bound in Wedlock is the first comprehensive history of African American marriage in the nineteenth century. Uncovering the experiences of African American spouses in plantation records, legal and court documents, and pension files, Tera W. Hunter reveals the myriad ways couples adopted, adapted, revised, and rejected white Christian ideas of marriage. Setting their own standards for conjugal relationships, enslaved husbands and wives were creative and, of necessity, practical in starting and supporting families under conditions of uncertainty and cruelty.

After emancipation, white racism continued to menace black marriages. Laws passed during Reconstruction, ostensibly to secure the civil rights of newly freed African American citizens, were often coercive and repressive. Informal antebellum traditions of marriage were criminalized, and the new legal regime became a convenient tool for plantation owners to discipline agricultural workers. Recognition of the right of African Americans to enter into wedlock on terms equal to whites would remain a struggle into the Jim Crow era, and its legacy would resonate well into the twentieth century.

Bound in Wedlock is a groundbreaking history that challenges the belief that the crisis of black marital and familial relations can be traced directly to slavery. With a vast arsenal of archival evidence, Hunter illuminates the complex and flexible character of black intimacy and kinship and the precariousness of marriage in the context of racial and economic inequality. It is a brilliant book and one destined to invite vigorous debate.” —Saidiya Hartman, author of Lose Your Mother: A Journey Along the Atlantic Slave Route

Ibram X. Kendi: Did you face any challenges conceiving of, researching, writing, revising, or publishing this book? If so, please share those challenges and how you overcame them.

Tera W. Hunter: The biggest challenge of writing the book was dealing with the chronological breadth (the entire nineteenth century) and geographical scope (slave societies throughout the entire nation). This instantly put me in a very different position as compared to To ‘Joy My Freedom: Southern Black Women’s Lives and Labors after the Civil War (Harvard Press, 1997). There I dealt with a scarcity of sources, whereas in Bound in Wedlock, I had an abundance of sources.

Access to sources also grew over time as collections were digitized and made available through online databases. This was a blessing and a curse. It increased the quantity of material I had to consider, use, or rule out. But it also put a lot of archival material at my fingertips. I established an open-ended approach to exploring as many kinds of sources that were available because I was genuinely interested in letting the records speak to me, to be my guide for the peoples’ stories I would tell.

I wrote a book proposal very early in the process, which helped to define the parameters and make the research feel more manageable. But some chapters I envisioned fell by the wayside and others emerged that I had not anticipated. I also began to write chapters, while simultaneously doing research, which also proved to be crucial.

To give one example, the very first chapter that I wrote is now chapter two in the book on slave law and marriage. That chapter was not part of my original conceptualization, but I wrote it because I could not answer a basic question satisfactorily from reading the then existing literature: what were the laws on slave marriage? But even once I wrote the chapter, I still did not fully appreciate how much the law and policy issues would come up in other parts of the book. This shows that some of the research grew directly from asking specific questions, which often led me into rabbit holes that were both fruitful and hard to escape. The continual return to the role of the law over the course of the century shaped my research on every era.

Comments on “Bound in Wedlock: A New Book on Slave and Free Marriage in the 19th Century”