With the news of the Daniel Holtzclaw trial verdict, black women’s sexual assault should be front-page news. This should especially be the case given that the Oklahoma police officer was sentenced to 263 years in prison in large part because the black women he assaulted fought back by testifying against him. The brave women who helped put Holtzclaw behind bars are part of a long history of black women’s anti-rape activism that stretches back to the days of slavery. It is often assumed that black women have had to fight back against their assaulters with little backing from the black community. However, in the mid-1970s, during the height of the Black Power Movement, black men and women came together to free Joan Little.

On August 27, 1974, Joan (Jo-Ann) Little sat in the Beaufort County Jail in Washington, North Carolina. The petite, twenty-two year old black woman had been incarcerated for two months while she awaited her court date on a breaking and entering charge. That night, sixty-two year old white jailer Clarence Alligood entered her jail cell, ice pick in hand, intending to coerce Little into sexual acts. In an act of self-defense, Little stabbed Alligood with the ice pick in order to wound him and escape. Little fled as her would-be assailant bled to death.

No stranger to the stereotypes about black women, Joan Little knew how the scene would look. Some would label her as a Jezebel and claim she was “asking for it.” Others would suggest that no respectable woman would have been in jail, or in this position, in the first place. Little hid out in the surrounding area for a little more than a week. Meanwhile, the state labeled her a fugitive and a murderer. Officials also issued a warrant for her arrest. In a scene that mirrored the manhunt of Angela Davis just two year earlier, state and federal authorities created a dragnet to capture Little. Local police arrested her on September 7th for first-degree murder. Forty-eight hours later a grand jury indicted her for murder. The following year Little would stand trial. If convicted she faced the gas chamber.

The case ignited the “Free Joan Little,” movement, with supporters building a political front that united disparate activists under a broad coalition. Angela Davis spoke out in support of Little, emphasizing her right to self-defense and indicting the racist and sexist prison industrial complex. Davis claimed that although Little had escaped Alligood’s grasp, she had “truly been raped and wronged many times over by the exploitative and discriminatory institutions of this society.”[1] Bernice Johnson Reagon, singer and member of the Student Non-Violent Coordinating Committee (SNCC), created the freedom song, “Joan Little,” which became the anthem for the movement. Other black women closer to home, such as Duke University Law Student Katherine Galloway, worked on Little’s defense. Renown civil rights leader Rosa Parks formed a local chapter of the “Joanne Little Legal Defense Committee” in Detroit.[2]

Black men also stood up for Little. Maulana Karenga, best known for creating the US Organization and the African American holiday of Kwanzaa, called on the public to “accept and support [Little’s] account of what happened to her” and to “reject the version of her oppressor.”[3] The Reverend Ralph Abernathy, leader of Martin Luther King Jr.’s Southern Christian Leadership Conference (SCLC), offered a poignant statement of support of black women’s right to self-defense at a protest in front of the Beaufort County courthouse. Newark Black Power leader and Black Arts poet Amiri Baraka also spoke out in support of Little and her actions.[4]

During what the Chicago Tribune called the “trial of the decade” prosecutors predictably attacked Little’s respectability and credibility. Yet, just as brave black women came forward in Holtzclaw’s trial, Alligood’s other black female victims, including Ida Mae Roberson and Phyllis Ann Moore, testified to his history of sexual assault. Their testimony tipped the jury in Little’s favor. After deliberating for a little more than an hour, the jury voted to acquit her of the charges.[5] 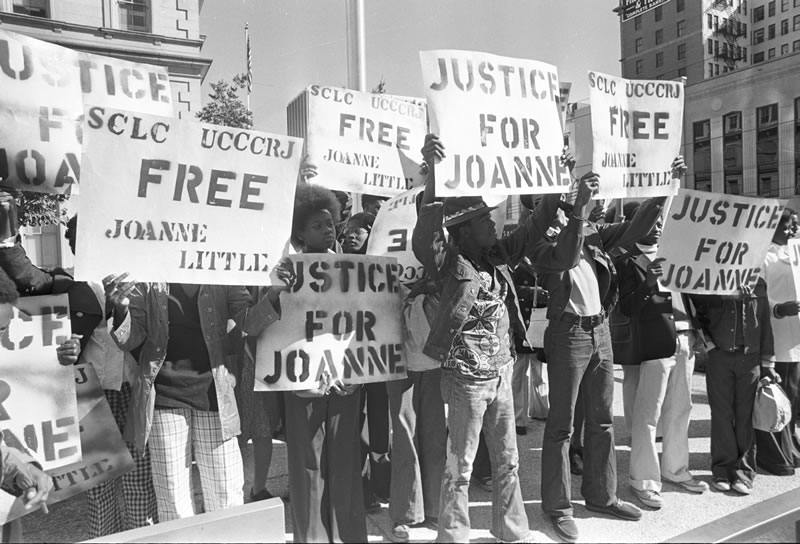 How did Little garner such widespread support during a movement known for its male bravado and sexism? Activists found that Little’s case epitomized black power ideals. Not only did her experience explain the systemic effect of intersecting systems of oppression like racism, sexism, and the prison-industrial complex; it was also another poignant example of ongoing extreme police brutality. Little’s case amplified black power activists’ claim that respectability politics undermined black liberation. It was also a way for them to champion their calls for African Americans’ right to self-defense and self-determination.

If Little’s case showed how black women’s sexual assault exists at the epicenter of many oppressive systems, then the “Free Joan Little” movement illustrates how rallying behind these women can be a way to address issues such as police brutality, racism, sexism, a biased judicial and penal system, and respectability politics. Just as Joan Little and the other women in Beaufort County fought back, Holtzclaw’s victims are leaders in the movement for complete and total freedom. Their fight represents the fight to liberate all people. Imagine if we built a freedom movement around them.