loading...
By Edward Dunsworth March 5, 2019 Comments Off on Agricultural Resistance and the Black Freedom Movement 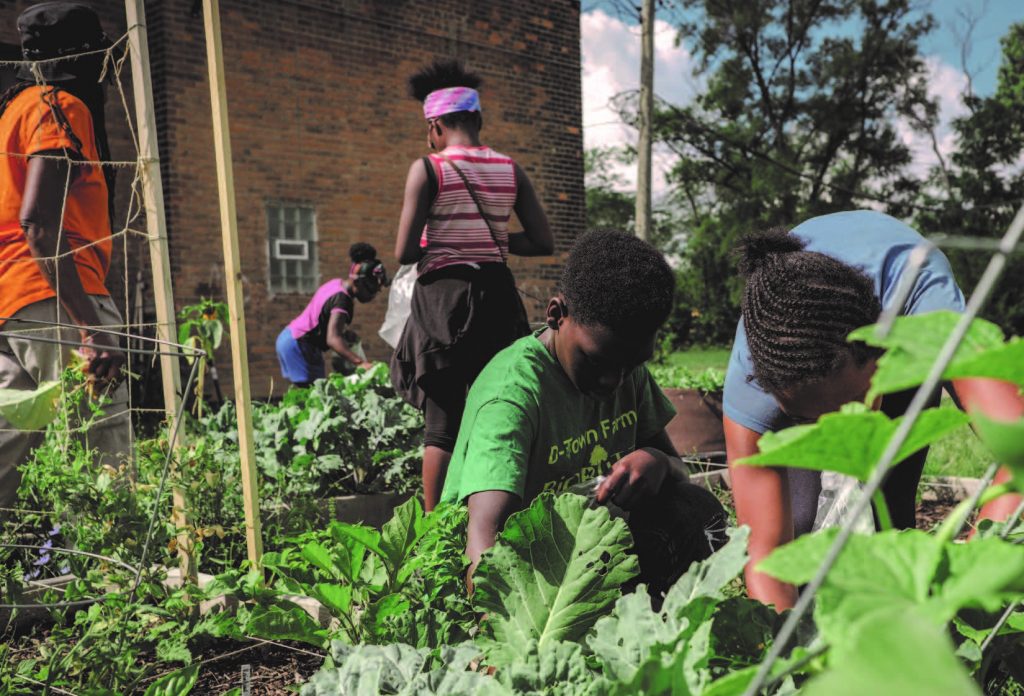 As the primary setting for slavery, sharecropping, and racialized Southern rural poverty, agriculture has–for good reason–been principally portrayed as a site of exploitation and oppression for Blacks in the United States. In her new book, Monica M. White advances a counter-narrative of the relationship between African Americans, farming, and the land. Focusing on four cooperative agricultural and food security organizations in the postwar United States–situated in a long history of Black thought and praxis on farming and cooperatives–White demonstrates that agriculture has always been, and continues to be, a site of struggle: not only a place of exploitation, but also a key locus in the pursuit of freedom.

Freedom Farmers is an excellent historical study of Black cooperative movements and their historical lineage and also represents an important contribution to theories of social movements and community organization. But the book has ambitions beyond the academy. Its author, in addition to her work as a professor of environmental justice, boasts over a decade’s experience in food justice movements, and the book explicitly aims to glean historical lessons from past cooperative efforts that could inform contemporary activists and urban farmers. White makes no attempt to hide her passion for, and political commitment to, food justice and community-led food systems. “This book is a love letter,” she writes. “It is my firm belief that love and research are not at odds, but that the best research is driven by passionate commitment” (26-7). This is a refreshing perspective that will immediately register with readers who share White’s dedication to politically-engaged scholarship.

The book is grounded in an original theoretical framework that White calls “collective agency and community resilience,” which builds on the idea of “everyday strategies of resistance” by including not only “disruptive,” but also “constructive,” forms of resistance. “The acts of building knowledge, skills, community, and economic independence have a radical potential,” and are themselves forms of resistance, White argues (6). 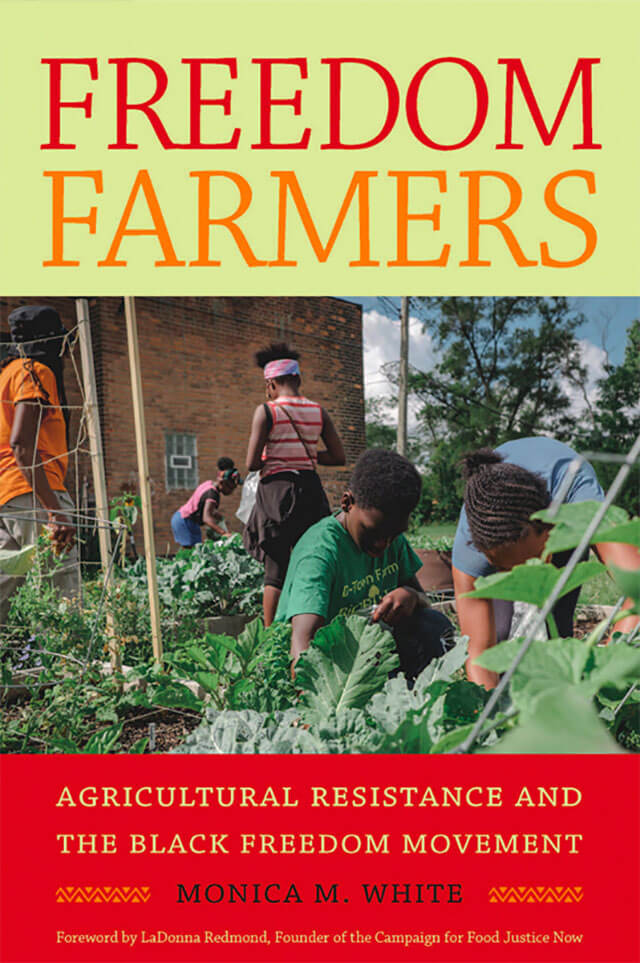 The book opens with a foreword by LaDonna Redmond of the Campaign for Food Justice Now, after which it is divided into five chapters, plus an introduction and conclusion. After laying out the book’s structure and providing an overview of the theoretical frame, the introduction details “four hundred years of collective agency and community resilience,” tracing Black efforts to fashion agriculture to suit collective community interests back to the earliest days of slavery, through Reconstruction and the Jim Crow era, and into the postwar movements for Civil Rights and Black Power. The penultimate section of the introduction vividly describes the author’s research methods including both archival and oral history research–a welcome departure from what in much historical writing often remains a “black box.”

Following this broad historical overview, Chapter One examines three prominent Black intellectuals in the turn-of-the-century period and their thought and work concerning agriculture and cooperatives: Booker T. Washington, George Washington Carver, and W.E.B. Du Bois. In their own ways, White explains, each of these men made monumental contributions to the development of post-emancipation Black agriculture and helped pave the way for future cooperative initiatives. The chapter’s discussion of George Washington Carver is particularly fascinating. Though popular understanding of Carver focuses on his scientific mind, White demonstrates that his science was always motivated by improving the social and economic conditions facing farmers, and Carver, “the poor people’s scientist,” was perpetually concerned with communicating agricultural knowledge to ordinary farmers and sharecroppers.

The remaining four chapters are each devoted to the study of one cooperative organization: three Southern organizations founded in 1967, and the contemporary Detroit Black Community Food Security Network (DBCFSN). The three chapters on Southern organizations are ordered according to scale, respectively examining local, regional, and pan-Southern initiatives. Chapter Two explores the history of Freedom Farm Cooperative (FFC) of Sunflower County, Mississippi. Founded amidst the crushing poverty, agrarian displacement, and racism that had sparked the “Second Great Migration” from the U.S. South to northern cities, the FFC aimed to provide an alternative to migration, a means for Sunflower residents to thrive on their home soil. In addition to an agricultural co-op, the FFC launched initiatives in housing, education, and disaster and poverty relief. The FFC was founded by an intellectual markedly different in many ways from those discussed in Chapter One. The daughter of sharecroppers who attended school only until the age of thirteen, Fannie Lou Hamer was not able to access the same halls of education of her male intellectual forebears. She was, White argues, a perfect example of what Antonio Gramsci called an “organic intellectual.” Drawing on her own experiences, Hamer was able to deftly connect conditions of poverty and disenfranchisement facing Southern Blacks with broader power structures of capitalist white supremacy and articulate a vision for an alternative future. As White explains: “In creating Freedom Farm as a means to develop a sustainable black community on the foundation of agriculture, Hamer illuminated the relationship between economic self-sufficiency and political power and translated the theory into action” (71). White sees particular opportunity for contemporary activists to draw lessons from the FFC: just as the FFC had success in drawing displaced rural workers into an alternative-building organization, so too must present-day groups develop initiatives that welcome and are tailored to the situation of unemployed industrial workers (and, one might add, precariously employed workers in general).

Chapter Three examines the North Bolivar County Farm Cooperative (NBCFC), which like the FFC was founded in Mississippi in 1967 and aimed to address similar community needs, though it did so on a regional rather than local scale. A major distinguishing factor of the NBCFC was its entry into food processing in order to “bypass the middlemen and feed the community” (88). The organization examined in Chapter Four operated (and indeed still operates) at an even higher scale. The Federation of Southern Cooperatives (FSC), as its name suggests, is a coalition of cooperatives from across the South. Founded in 1967 at a meeting of representatives from 22 southern co-ops, by 1974 it boasted membership from 134 co-ops across 14 southern states. A “co-op of co-ops,” the FSC has engaged throughout its history in both advocacy and capacity-building work in its efforts to support Black family farmers, co-operatives, and credit unions. Formed to counteract structures of white supremacy and economic racism, Southern co-operatives–unsurprisingly–were often subject to reprisals from the representatives of these same power structures. These included attempts at financial sabotage (especially from white competitors), local government attempts to curtail federal funding, and police harassment of growers (110-15).

Chapter Five takes us out of the South and the immediate postwar period and into contemporary Detroit, where White explores the Detroit Black Community Food Security Network (DBCFSN). Though seemingly a leap from Southern co-ops of the 1960s and 1970s, White draws many provocative connections between the two contexts. For one, many Black Detroiters are descendants of participants in the “Great Migrations” from the South, sparked by many of the same racialized socioeconomic factors that led other Southerners to co-operative movements. Second, White demonstrates that the conditions of economic vulnerability facing working-class Blacks in deindustrializing Detroit bear many similarities to those faced by displaced farmworkers and growers in 1960s-70s South. The chapter presents an engaging treatment of the DBCFSN’s work, which connects community-based agriculture on its D-Town Farm with antiracist and anticapitalist analysis.

My only major critique of the book has to do with its organization. While the author makes clear that the three case study chapters on southern cooperative organizations are ordered according to scale of operations–from local, to regional, to pan-Southern–I am not convinced this was the best choice. It was, for example, a bit jarring to learn in Chapter Four–after reading about the two individual cooperatives in the preceding chapters– that in the exact same year as these two (relatively) small-scale organizations came into existence, the pan-Southern FSC was also created, at a meeting of 22 representatives of co-ops from multiple states. Clearly the FFC and the NBCFC were launched amid a broader context of Black agricultural cooperatives in this time and place, but the individualized focus on the two case study organizations tends to obscure this wider context.

This organizational quibble, however, should not unduly distract from what is an impressive and inspiring book. A model for community-engaged scholarship, I have every confidence that Freedom Farmers will find its way to cooperative organizations in Black, Indigenous, immigrant, and working-class communities, in the United States and elsewhere, where it will be well-positioned to inspire the Fannie Lou Hamers of this generation in their quests to build sustainable, participatory, and equitable food justice movements.

Edward Dunsworth is a PhD student in the department of History at the University of Toronto. He is currently writing a dissertation that offers a transnational history of Ontario tobacco labour in the 20th century. The project examines the multiple migration systems and interlocking factors of race, gender, state policy, and capitalist development that together made Ontario tobacco labour. Follow him on Twitter @ehewey.