loading...
By Keisha N. Blain April 16, 2018 Comments Off on Claiming Freedom: A New Book on the Transition from Slavery to Emancipation in Georgia

This post is part of our blog series that announces the publication of selected new books in African American History and African Diaspora Studies. Claiming Freedom: Race, Kinship, and Land in Nineteenth-Century Georgia was recently published by the University of South Carolina Press. The author of Claiming Freedom is Karen Cook Bell, Associate Professor of History at Bowie State University. She received the Ph.D. in history from Howard University. Her areas of specialization include slavery and the slave trade, the Civil War and Reconstruction, and women’s history. Her scholarship has appeared in the Journal of African American History; Georgia Historical Quarterly; Passport; U.S. West-Africa: Interaction and Relations (2008); Before Obama: A Reappraisal of Black Reconstruction Era Politicians (2012); Converging Identities: Blackness in the Contemporary Diaspora (2013); and Slavery and Freedom in Savannah (2014).  She has published the textbook Special Topics on the U.S., Africa, and Europe (Pearson, 2016) and Claiming Freedom: Race, Kinship, and Land in Nineteenth Century Georgia (University of South Carolina Press, 2018). She is a former American Association of University Women Dissertation Fellow. Follow her on Twitter @kbphd08. 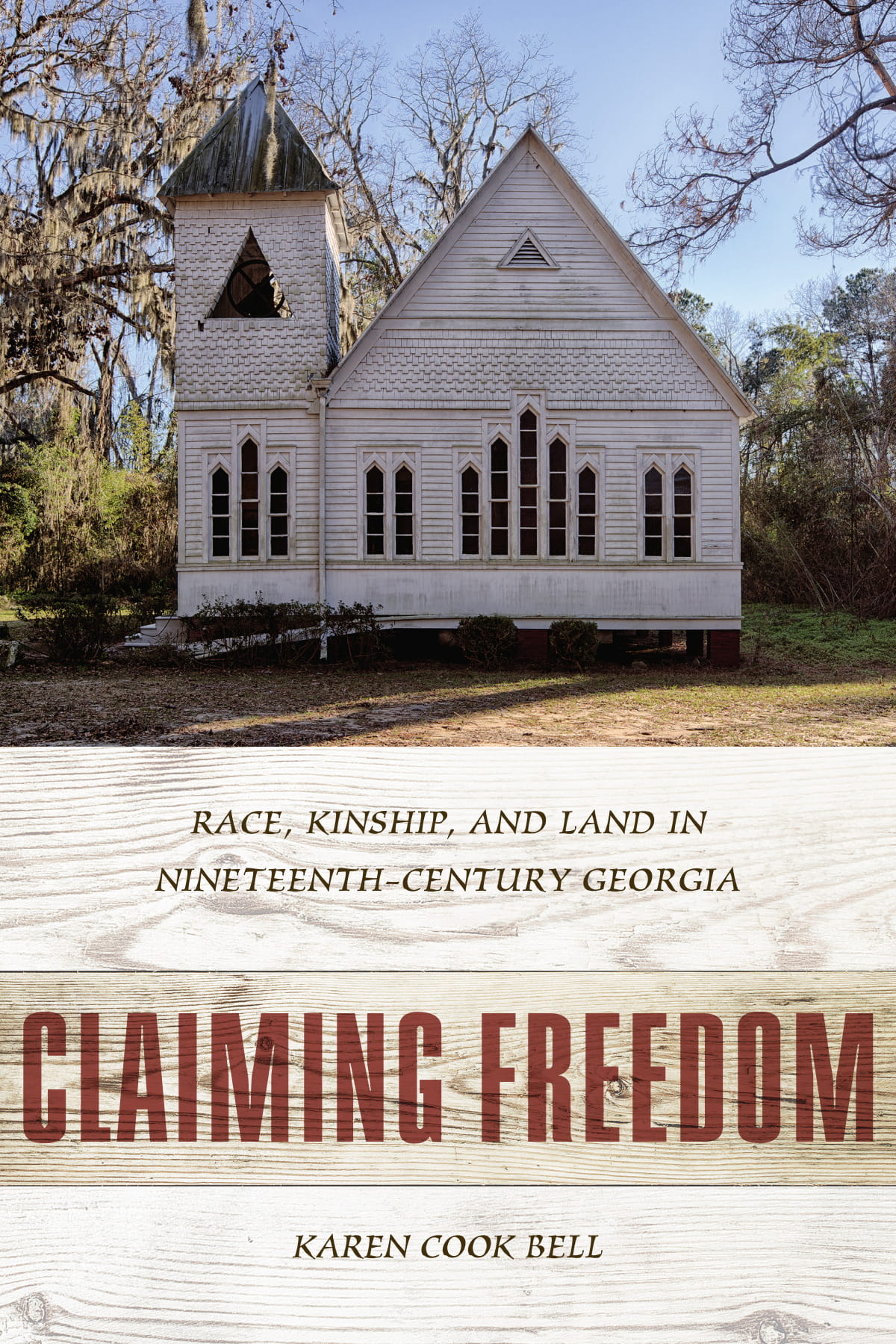 Claiming Freedom is a noteworthy and dynamic analysis of the transition African Americans experienced as they emerged from Civil War slavery, struggled through emancipation, and then forged on to become landowners in the Georgia Lowcountry during the Reconstruction and post-Reconstruction period. Karen Cook Bell’s work is a bold study of the political and social struggles of these individuals as they strived for and claimed freedom.

Bell begins by examining the meaning of freedom through acts of self-emancipation prior to the Civil War. Consistent with the autonomy that they experienced as slaves, emancipated African Americans from the rice region understood citizenship and rights in economic terms and sought them not simply as individuals for the sake of individualism, but as a community for the sake of a shared destiny. Bell also examines women’s roles and gender issues, topics she believes are understudied but essential to understanding all facets of the emancipation experience. It has been well established that women were intricately involved in rice production, a culture steeped in African traditions, but the influence that culture had on their autonomy within the community has yet to be determined.

“Karen Cook Bell’s beautifully written book is original and stimulating. A welcome addition to the growing literature on African American rural slavery, land ownership, and rice production. The study is a valuable and timely contribution to the expanding scholarship on the multifaceted West African roots of African Americans. The book is an example of insightful and rigorous investigative scholarship.”—Alusine Jalloh, associate professor of history, founding director of the Africa Program, University of Texas at Arlington

Keisha N. Blain: What type of impact do you think your work will have on the existing literature on the subject? Where do you think the field is headed and why?

Karen Cook Bell: My study interrogates the paradigm of freedom during and after slavery. Freedom was a process that spanned several decades and included intermediate struggles for freedom before the Civil War and more struggles to define and claim the freedom promised after the official end of slavery. My study makes an important intervention in the historiography by providing a regional analysis of the contested terrain of slavery and freedom in the rice producing region of Lowcountry Georgia with a clear sense of the importance of local institutions and the local political economy to understanding broader political and economic developments. I interrogate the meaning and significance of the postwar political economy of the region, which allowed the acquisition of land and the continuation of African American participation in the political process during the era of southern disfranchisement.

Records from this period illustrate the capacity of former slaves to rely on community and kinship networks to carve out and define their own spaces as reflected in the political incorporation of the all Black town of Burroughs, Georgia in 1898. Consistent with the autonomy that they experienced as slaves, the emancipated slaves from the rice region understood citizenship and rights in economic terms and sought them not simply as individuals for the sake of individualism, but as a community for the sake of its collective destiny.

The question of what freedom meant has returned as a hotly contested question. Recent scholarship has sought to portray the wartime and post-war history of African Americans as one of victimhood and suffering rather than optimism and agency. It has led some historians to conclude that the historiography of the 1970s, which emphasized Black agency and cultural resistance, went too far. These historians suggest that Black slave culture did more to support the institution of slavery rather than help Black people survive. They also argue that Black people emerged from the Civil War so damaged that they could hardly stand on the ground of freedom, if they lived to see it. The majority of African Americans did live to see freedom. And the wars they waged before and during the Civil War shaped Black radical politics during the postwar period.