loading...
By Jessica Parr January 24, 2019 Comments Off on Fugitive Slaves and the Quest for Freedom

The Fugitive Slave Act of 1850 intended to resolve whether free states had a legal obligation to return fugitive enslaved people to their enslavers. It was a legal question that had originally been addressed at the federal level with the 1793 Fugitive Slave Act, when Congress codified the right of enslavers to recover their fugitive slaves under Article 4, Section 2, Clause 3 of the United States Constitution. But disputes remained, as demonstrated by the 1842 U.S. Supreme Court case Prigg v. Pennsylvania: which determined the legitimacy of a Pennsylvania statute prohibiting the removal of Blacks from Pennsylvania for the purposes of enslavement. The Court determined that although federal law precluded state law, Pennsylvania could bar its state officials from cooperating in the return of fugitive slaves. It simultaneously reinforced the federal government’s role as arbiter over the status of fugitive slaves, thus weakening the 1793 Fugitive Slave Act. The Fugitive Slave Act of 1850 was the outcome of enslavers clamoring for a strengthening of federal law.

R.J. M. Blackett‘s The Captive’s Quest for Freedom: Fugitive Slaves, the 1850 Fugitive Slave Law, and the Politics of Slavery is a magisterial, meticulous, and well-written study of the struggles of fugitive slaves in antebellum America. Although the book is a sophisticated study of the legal and political complexities behind the law, it does not marginalize the enslaved people Blackett discusses. The Captive’s Quest for Freedom is organized into two parts. The first half is titled “The Slave Power Asserts its Rights (3-136). It is a section that draws richly from newspapers, court records, Congressional records, and anti-slavery pamphlets. What follows is a masterful discussion of the politics and economics of legal approaches to fugitive slaves from the Fugitive Slave Clause of the United States Constitution up through the enactment of the 1850 Fugitive Slave Law. The discussion of the economics alongside the law is important because, as Blackett notes, “there would have been no need for a fugitive slave law, either in 1793 or 1850, had slaves not escaped regularly, and in such numbers, that their activities came to be seen as a threat to the survival of the slave system.” (xi) In fact, Blackett rightly argues, “slaveholding interests unabashedly declared” that the “passage and enforcement” of the Fugitive Slave Act of 1850 was tied to the “future of the Union.” (xi) Yet, as much as federal law tended to “pander” to slaveholding interests, and the argument was made that the executive branch lacked the Constitutional authority to abolish slavery, there were also arguments that Congress did not expressly have the power to enact a fugitive slave law. (xi)

The volume first examines the ingenuity of fugitive slaves in their escapes: Henry Brown’s scheme to mail himself to the American Antislavery Society in Philadelphia, and Ellen and William Craft’s escape with William posing as his light-skinned wife’s slave. (4) This genius, Blackett notes, resulted in five-figure economic losses to the enslavers from whom the fugitive slaves “stole” themselves. The economics included lost labor, bond, and other expenses in their recovery. (5-12) Blackett also demonstrates that free and formerly enslaved African Americans from major northern cities like Boston, Syracuse, and Chicago, as well as individuals like William Craft, Rev. Jermain Loguen, and Lewis Hayden actively campaigned against the Act. Like Martha Jones’s Birthright Citizens (also from Cambridge University Press), Blackett’s book offers considerable insight into legal and political resistance by Black antislavery activists. 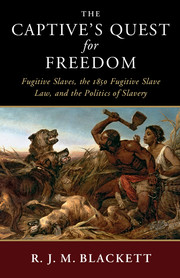 The Black-centered approach to the discussion of the politics of slavery also sets Blackett’s study apart from others. He likens of the fugitive slaves to refugees, which is both thought-provoking, and timely. One of the parallel legal debates he discusses in leading the Fugitive Slave Act of 1850 was whether fugitive slaves were eligible for writes of habeas corpus, and whether the guarantees of habeas corpus could be suspended (effectively done by both the Fugitive Slave Act of 1850, and the Dred Scott Decision of 1857). Writs of Habeas Corpus were a legal tactic employed by British abolitionists in Great Britain to thwart individuals who seized Black Britons in port cities and sell them into slavery.

The second half of The Captive’s Quest for Freedom captures the complexity, by region, of how locality continued to affect the status of fugitive slaves following the enactment of the Fugitive Slave Act of 1850; particularly when it came to enforcement. (137-460) This section is subdivided into six chapters: Mississippi and Illinois, Western Kentucky and Indiana, Eastern Kentucky and Ohio, Southeast Pennsylvania, Eastern Shore of Maryland and Philadelphia, New York, and Massachusetts. Blacket’s approach offers glimpses into complex geographies that did not always align cleanly with state borders, yet could have a profound impact on political and social attitudes towards fugitive slaves, and how much support (legal or otherwise) they could anticipate. In his discussion of Western Kentucky and Indiana, for instance, Blackett described the case of James Armstrong, a 31-year-old enslaved man who crossed the Ohio River from Kentucky into Indiana. Like many fugitive slaves, Armstrong was quickly recaptured, but his case and the myriad other fugitive slave advertisements illustrated both the volume of escape attempts, and the degree to which fugitives made calculations as to where they should run to in order to find the support networks they would need to have the best possible chance of escape. (181-182) Likewise, Southeast Pennsylvania was attractive to many fugitives because of its reputation of being home to anti-slavery Quakers. And Pennsylvania and other cities had Black societies that formed to protect fugitive slaves. (267)

Blackett concludes by discussing the ultimate failure of the Fugitive Slave Act of 1850 to appease southern slaveholding interests. Portions of Free States, such as the area along Western Reserve along the shores of Lake Erie was home to a number of residents who “openly violated the law,” and even “employed agents to go south to aid fugitives (441) This is not to suggest that Blackett implies that a successful and uniform enforcement of the Fugitive Slave Act would have prevented the disunion. Rather, its enforcement remained contentious and was part of the larger debate over slavery. In that sense, it was not unlike prior “mediations” over slavery, such as the Missouri Compromise of 1820, the Kansas-Nebraska Act, and the Compromise of 1850.

The Captive’s Quest for Freedom: Fugitive Slaves, the 1850 Fugitive Slave Law, and the Politics of Slavery is a valuable and nuanced contribution to the scholarship on slavery and the law. It is a must-read for scholars of African American Studies, Legal Studies, and Constitutional History.