This is an excerpt from the fourth chapter of Driven Toward Madness: The Fugitive Slave Margaret Garner and Tragedy on the Ohio by Nikki M. Taylor. Margaret Garner was the runaway slave who, when confronted with capture just outside of Cincinnati, slit the throat of her toddler daughter rather than have her face a life in slavery. Her story inspired Toni Morrison’s Beloved. In Driven Toward Madness, Taylor brilliantly captures her circumstances and her transformation from a murdering mother to an icon of tragedy and resistance. This excerpt grapples with whether or not Margaret Garner had been sexually assaulted by her owner Archibald K. Gaines and explores the possibility that he—not her husband, Robert–had fathered her daughters, Mary and Cilla. The question initially had been raised by Women’s Rights advocate Lucy Stone who insisted that the light complexions of the Garner daughters proved Archibald was their father. This excerpt places Margaret Garner in a historical context that rendered black women unrapeable in the eyes of the law. It reveals how race, gender, status, and powerlessness made Garner particularly vulnerable to Gaines and other white slaveholding men. This excerpt has been reprinted with the permission of Ohio University Press.

Allegations about Gaines’s sexual exploitation of Margaret were first raised by Lucy Stone during the fugitive slave hearing. In open court, she gave a speech that laid bare the most controversial core of the entire tragedy—rape and race mixing—when she declared, “The faded faces of the negro children tell too plainly to what degradation female slaves submit. Rather than give her little daughter to that life, she killed it.” Stone bluntly stated—as none but a women’s rights advocate would dare—that the Garner children’s light complexions, or “faded faces,” testified to Margaret’s “degradation”—which in the nineteenth century, was a euphemism for sexual abuse. In one declaration, Stone not only had accused Gaines of sexual abuse and insinuated his paternity of Margaret’s children, but also explained that the hell Margaret tried to save her daughters from was sexual abuse. In short, Stone insisted that Mary’s murder had been a gendered mercy killing, of sorts. 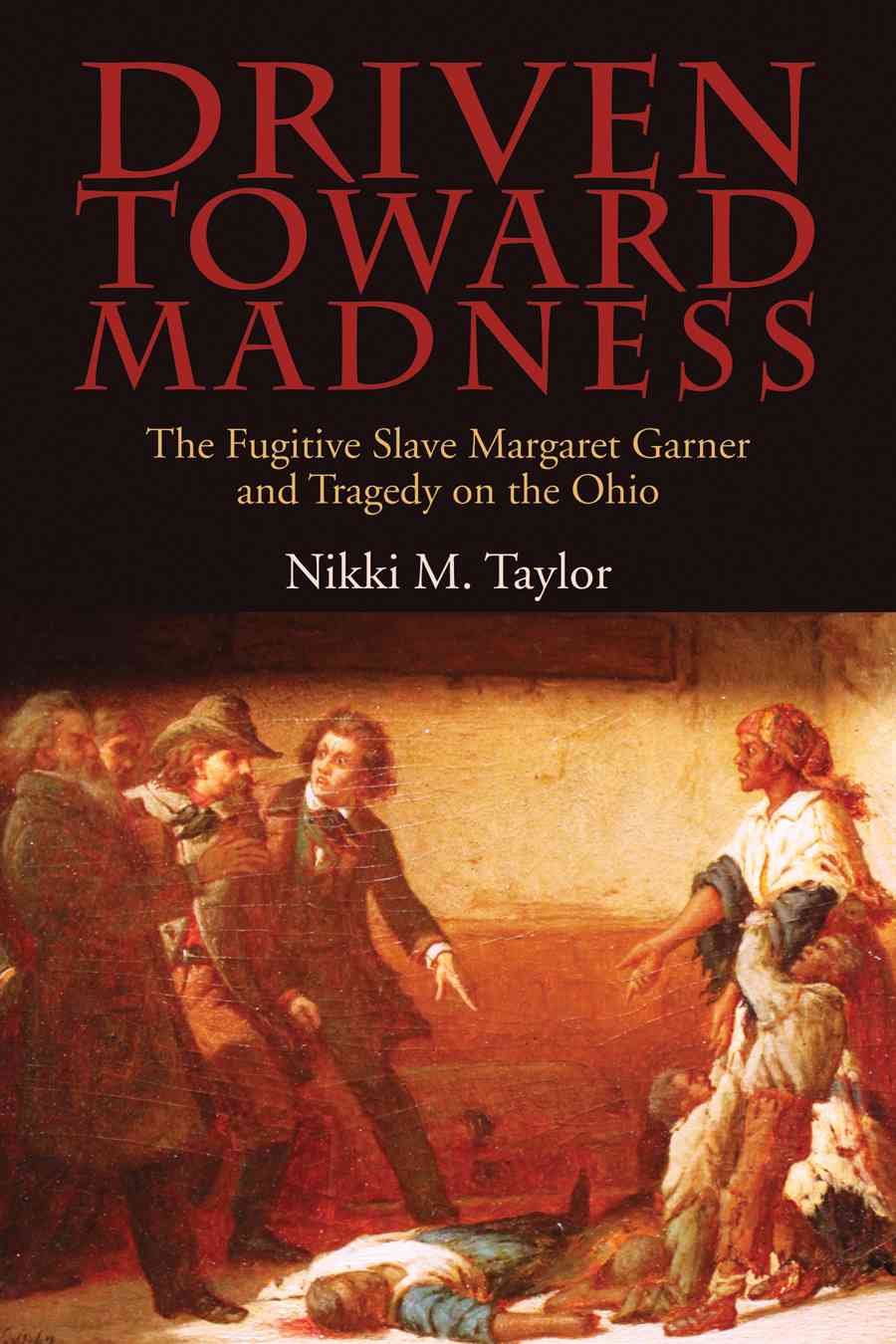 Had Margaret Garner really told Stone that she had been raped by Gaines and that he fathered her daughters, as Stone implied? Perhaps; perhaps not. Garner may have felt comfortable enough with Stone to confess these salacious secrets. After all, Stone had an empathetic ear: not only was she a women’s rights advocate and abolitionist, but she fully empathized with Garner’s decision to kill her daughter. But Stone’s accusations complicate this history and lead to at least two plausible theories of what happened to Garner.

The question of whether Margaret Garner had a sexual relationship with Archibald K. Gaines, and if it constituted rape, cannot be known with absolute certainty. The answer cannot be disentangled from nineteenth-century gender and racial assumptions; nor can it be disentangled from how social and economic power—and powerlessness—functioned in nineteenth-century society. At one end of the power spectrum were powerful white men, who wielded unchecked racial, gender, and economic power in southern society—power that was protected and magnified by the legal system.

At the other end of the spectrum, enslaved people were powerless and considered chattel—property that could be bought and sold in the marketplace. African American women, in particular, were treated as “purchasable sexual and economic commodities.” When a man purchased a bondswoman, he also purchased the right to have sex with her. The business transaction that completed her sale is all that it took to open the door to unlimited and unchecked sexual access to her. In antebellum slave society, ownership, power, and sexual access were inextricably linked as it related to owners. Gaines owned Garner’s body: it was his to do with what he wanted, regardless of her will or desires. And no one could stop him—not even the law.

In the nineteenth century, the legal (but heteronormative and raced) definition of rape was “carnal knowledge of a woman forcibly and against her will.” In order to convict an alleged rapist, officials needed to prove that the sexual intercourse occurred by force, or with some violence, and against the woman’s will. Everything about slavery was maintained by violence and done against enslaved people’s wills; sex was no exception.

Slaveholders owned the bodies, and ordered the movements of their bondspeople. The intertwined elements of ownership, abuse, and power, meant that sex with those with stark powerlessness—like enslaved women—sometimes made physical force unnecessary. Owners used coercive tactics to obtain sex and sexual favors from them in a myriad of ways, including threats of violence. In fact, the threat of violence was second to violence as a form of sexual coercion. Violence was so pervasive that the threat of violence often is all it took to get these women to submit to sex.

Slave owners controlled the provisions, punishments, workload, quality of life, and stability of slaves’ families, so they could deny or threaten any aspect of their lives to get a woman to submit sexually. Sometimes, too, promises of rewards and leniency were used for the same ends. For example, an owner could demand sex in exchange for visitation rights to loved ones, for better food, or time off. In short, enslaved women had no real choices about whether they would or would not engage in sex with their owners. Because of this lack of real choices, all sex between an unfree woman and her owner can be considered nonconsensual.

Kentucky, though, did not make force, violence, or the woman’s consent the standard to define rape; race was the first standard. Kentucky law defined rape as to “unlawfully and carnally know any white [emphasis added] woman, against her will or consent.” In other words, only white women could be victims of rape in the eyes of the law; only men who raped them were rapists. This standard meant that even if Garner had gone to officials complaining of sexual abuse, the existing structure of the law did not allow her rapist to be arrested or convicted. Certainly, one cannot ignore the legal and social realities of the world in which she lived.

As an enslaved person, an African American, and a woman, Margaret Garner belonged to three groups of disempowered people. The intersection of patriarchy, white supremacy, and wealth meant that as a white male slave owner, Gaines had all the power. The intersection of race, gender, and enslaved status meant that Margaret’s powerlessness had a multiplicative effect on her oppression. Consequently, she was vulnerable to sexual assault at the hands of her owner and any other white man, for that matter. In nineteenth-century America, there were statutes against raping white women—some even raised the death penalty for such an offense, but none specifically prohibited the rape of African American women.

Slaveholders and other elite men easily avoided both prosecution and conviction. What this also tells us is that a slave owner’s social and economic power to sexually abuse enslaved women with impunity made sexual abuse a privilege granted through slavery, ownership, socioeconomic status, and even whiteness.

Nikki Taylor is chair of the department of History at Howard University. Taylor, who is from Ohio, graduated with honors from the University of Pennsylvania, where she earned a history degree and was a recipient of a Fulbright Scholarship that allowed her to study African history in Ghana. She attended Duke University where she earned a M.A. and Ph.D., in U.S. and African American History. Taylor also has authored three books, the most recent being “Driven Toward Madness: The Fugitive Slave Margaret Garner and Tragedy on the Ohio,” which was published in December 2016.