*This post is part of our online forum on the Life and Legacy of Dr. James H. Cone.

The late theologian James Cone will be remembered not only for his intellect and passion, but also for extending the range of Black freedom and forever changing the terms of theologizing. His is a classic tale in a tradition of the Black intellectual struggle to reconcile spiritual and political freedom shared with forerunners such as David Walker, Frederick Douglass, and W.E.B. Du Bois. Cone began his journey to a radical Black religion in the mid-1960s as he faced the soul-crushing realization that the theology he learned at Garrett-Evangelical Theological Seminary lacked the language to meaningfully address the race crisis in America or his African American students at Philander Smith College in Little Rock. Moved by a growing sense of inadequacy and recognizing the essential link between Black freedom and the Christian value of justice, he began to interrogate the bible and theology from the perspective of the Black experience. To be a Christian, he concluded, was a demand to join Black people in their struggle for freedom. Pained over the Black Power Movement’s rejection of the Black church and despondent over the assassination of Martin Luther King Jr., he believed the struggle for freedom had reached an impasse unless there was a recovery of a theology for and about Black people. A theology emerging from the experience of Black people in which God was Black and partial to the oppressed was a precondition for a viable politic of liberation. Cone went on to lead a movement of an unapologetic political theology of Black empowerment, challenging the idol of white supremacy.

His charge against American theology was the failure of white theologians to recognize how their privilege served as a political lens of white supremacy through which they read the bible. The theologian as a textual interpreter was not disinterested, but instead brought to the text a set of assumptions about how the world works, producing a theology in which Black was associated with sin and evil and white with salvation. Neither was theology contained within the walls of the churches or seminaries; it spilled out onto the streets and saturated every fiber of our social and political lives. It was a theology that had gone through the Enlightenment, written by European and American white men in stained glass towers, and it gave the nation a sacred justification for racism. Against this edifice of white hegemony and in the crucible of oppression, Black people had forged a theology of their own. Black people’s understanding of God was not a resignation to suffering but rather a vital energy necessary to sustain the Black freedom movement for centuries.

I met Cone in November 2011 for a conversation that I hoped would fill some of the gaps in my research on the history of liberation theology. It was our first and only private meeting, and I was anxious as I knocked on his door. All that melted away as he greeted me with a warm grin and invited me into his simply furnished apartment in New York City. It was located near Union Theological Seminary, where he held the Bill and Judith Moyers Distinguished Professor of Systematic Theology chair, and the historical Riverside Church, founded by John D. Rockefeller Jr., two bastions of mid-century liberal religion. Union is where public theologians such as Walter Rauschenbusch, Paul Tillich, and Reinhold Niebuhr made their mark on America. Cone came to Union at the age of thirty after the publication of the earth-shattering book Black Theology and Black Power (1969), the first in a series of interventions into the upheaval over Black Power and the viability of Christianity as a liberating religion. Refusing a position as a professor of Black theology, he took a position as professor of theology—a distinction he considered significant. The history of Riverside Church’s pulpit is filled with the leading minds of liberal religion and with guest speakers such as King and James Forman, who, in 1969, delivered an impromptu speech on the Black Manifesto demanding reparations. In the 1960s, Riverside was a center for debate between liberal and radical religion.

As an intellectual historian, I caught up with Cone more than forty years after the publication of Black Theology and Black Power. By that time I had spent several years reading his work, which, when encountered without the mediation of a guide, can sound strident, hyperbolic, and easily dismissed as unworkable or even threatening. Yet, the more I read him the less radical and more reasonable he sounded. My interest in Black liberation theology came about indirectly. Feminist and Latin American liberation theologies combining culture, politics, and religion had been my gateway to Black theology. I was not his student or field colleague. Plainly speaking, he was a historical subject for what eventually would become a book, which accounted for my nervousness as I navigated my professional stance and my personal interest. 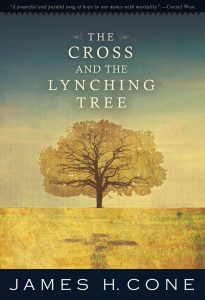 I was not disappointed, as our seventy-five-minute conversation was intense and exhilarating. If one can feel ideas, Cone exuded them with passion. We compared personal notes on our diverse backgrounds, his Jim Crow upbringing and AME church experience in Arkansas. We shared the experience of having parents with only rudimentary educations who bequeathed to us a sense of justice in the practice of religious faith. Both of us had been affected by race in different ways that were strangely intersecting, he as a Black man and me as a child immigrant from Latin America standing astride the meaning of Blackness and North American–defined whiteness. Our conversation covered a broad number of issues: economic justice; Gustavo Gutiérrez, whom he much admired; the social gospel; white supremacy; his then-forthcoming and favorite book The Cross and the Lynching Tree (2012); my favorite, God of the Oppressed (1975); decolonization; the power of the state to enforce racist submission; King and the Civil Rights movement; Black Power; Malcolm X; James Baldwin; and Cone’s love for Black people in their struggle. We had the kind of conversation most of us dream about but rarely have—intellectually riveting and emotionally satisfying. He proved himself to be both fierce and kind, a rare combination. As I returned to his work his persona stayed with me, reminding me that the theology I was reading was not a rationalized other-worldly one but the poetics of a deep spiritual passion for justice.

My encounter with Cone was at the tail end of years of general research into the history of the relationship between modern theology and politics. His work had generated a great deal of criticism and polemics. Some conservatives rejected him outright for his race-centered thinking; most ignored him. Some open-minded liberals were stunned into silence; others ran with it in new directions. Among those who took the time to read Cone’s work, the charges against him were many: sloppy hermeneutics, lack of exegetical clarity, reverse racism, and politicization of the Christian faith. Basically, he was charged with not abiding by the rules set up by white theologians. He had his share of critics among Black thinkers too. Some chided him for refusing to let go of an unredeemable Christian God, others for building too much of his theology on white foundations and for never dealing effectively with the problem of theodicy. Black women accused him of sexism for a theology too centered on Black manhood, yet it inspired the forging of womanist theology, with his former student Jacquelyn Grant and Delores Williams being early pioneers. There were critics, innovators, and imitators on every corner.

For those engaged in humanistic inquiry, Cone highlighted the social and political consequences that are missed by not attending to what people believe about God and God’s will. Religious ideas are all-encompassing motivators that are nonetheless too often left unexamined or given only a superficial reading. The rhetoric of church/state separation has created the modern illusion that religious ideas are sequestered within a private sphere. Before Cone, no one believed that Black people had a theology of their own with any political consequence. After all, few African Americans had the opportunity for theological education, and hadn’t they received Christianity from white missionaries? He argued that in the era of Jim Crow, African American preachers with an ideology of accommodation adopted the theology of their white teachers. It had not been so among slaves and freemen. The adoption of white theology was detrimental to Black freedom.

However, Cone did more than introduce critical race theory into theology, producing two generations of Black theologians. He alerted laypeople in the pews to the racist assumptions delivered from pulpits, changing forever what it meant to be Black and Christian. He revolutionized theology among decolonized people all over the world and contributed to a new theological method that starts not with transcendent truth, but with the experience of the oppressed. He contributed to breaking down the modern myth of a separation between theology and political philosophy by closing the gulf between a transcendent God above and a God who works within the messiness of history, giving new insight to all forms of oppression.

Cone made us aware of how religious ideas have underwritten white supremacy and gave us a model of how to undo them. In America, what Tillich called a religious “ultimate concern” is preserving white supremacy underwritten by the authority of God—a justification not neutralized by protest, persuasion, or law alone. As an iconoclast against a white God, Cone began tearing down the sacred canopy of white supremacy that has hung over the nation from the Puritans to the age of Donald Trump. There is much left to do. His legacy to historians and intellectuals is the work of engaging in a new critical evaluation of religious thought by excavating the historical construction of the sacred canopy of white supremacy. Such a study can illuminate the endurance of racism. His life inspires us to listen and amplify not only the still discernible resistant faith of Black people, but also the theology emerging from all the wretched of the earth.

Lilian Calles Barger is a historian, author, women and gender consultant and speaker working in Taos, New Mexico. Her research interests include the historical development of social, religious and feminist thought in modern America with a particular expertise in women and gender history and the emergence of liberation theology. The latter is the subject of her latest book, 'The World Come of Age: An Intellectual History of Liberation Theology' (Oxford University Press, 2018). Follow her on Twitter @LilianBarger.