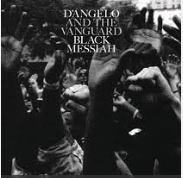 I spent the latter portion of 2014 feeling like I was waking up in a veritable Groundhog Day (1993) remake, where the senseless loss of black lives was something that I could not stop. I found it difficult to articulate any sense of feeling, and when I could, “anesthetized,” captured it best. The numerous deaths of black women and men—many of which were unindicted, several that went unnoticed by mainstream media, and others that even befuddled the Twitterverse—left me, like so many others, wondering whether black lives really do matter. So by the time December arrived, my anticipation for a new year—and new beginnings—was palpable.

And then December 15th arrived, and with it came the release Black Messiah, D’Angelo’s first album-length studio release in fourteen years. When the syncopation dropped in those first bars of “Aint That Easy,” my husband and I sighed a veritable “yes Lord.” Church indeed. With The Vanguard, D’Angelo delivered a funky, refreshing, acerbic brand of soul that felt so timely. So necessary. We were thirsty and we didn’t even know it. And we weren’t the only ones. Our friends—those we know well and others we just know—all felt it, and it reverberated on Facebook, Twitter, and Instagram. D’Angelo stealthily returned and showed up, as only he could. And in so doing, gifted our faces with much needed smiles and imbued the end of 2014 with a sense of hope that had our heads nodding.

I must confess that I have a special affinity for D’Angelo. I’ve been a faithful fan from the very beginning. Even as some questioned the feel of Voodoo (2000) I knew it to be the better of his first two albums. I was startled by his sex-symbol turn on “How Does It Feel,” unquestioningly loyal when I heard that he simply didn’t want to be another black body to be fetishized, and I didn’t flinch when he stepped away from the limelight. D’Angelo has always had a way of setting a high bar and upping the ante, even when he hasn’t been “on the scene.” I’ve been there the whole ride, the ups and downs, highs and lows, and highs again. My husband and I danced to his “Heaven Must Be Like This” when we were married. It’s our song. D’Angelo, second only to Anthony Hamilton, is our guy.

So the subtlety of Black Messiah’s arrival was a welcomed reminder of our love, for each other and for black love broadly construed. This (re)surgence of love is a feat that was none too easy at the end of a such a tumultuous year where black voices, experiences, expressions, and bodies danced the publicly precarious line between hypervisibility and invisibility. My colleague Kami Fletcher brilliantly noted “…as much as the devaluation of Black life and the objectification of Black bodies has tried to negate the personhood of Black peoples, it did not.” Black Messiah stands as an opportune reminder of this very idea.

Black Messiah helps us understand the precisely ineffable quality that makes D’Angelo so special. Striking an uncanny balance between the past and present, the now and the future (as in, “traveling at the speed of light and then at the same time I’m in the same spot too”), D’Angelo harkens to the theological concept of the already and the not yet. And it’s that theological sense of time driving the pulse, lick, and impetus of Black Messiah. D’Angelo inherently embodies—in his music and his personhood—the eschatological. But not an eschaton that surreptitiously points to an unspecified, vapid future. D’Angelo’s eschatological sensibilities are very much the makings of a contemporary black liberation theology.

Forty-five years ago, James H. Cone articulated the idea of black liberation from all forms of oppression as a theological concept. In A Black Theology of Liberation (1970)[1] Cone argued that knowing god requires being in solidarity with the oppressed, a participatory act that makes liberation a complete and full reality. Joining the side of the oppressed is the source of a liberatory eschaton.

Cone’s unapologetic tone was radical and groundbreaking for its time, and especially for the primacy it placed on the multivalent oppressions laid bare through the experiences of blacks living in America. Even as its masculinist formulations have long been contested and expanded upon by womanist and black feminist thinkers,[2] Cone’s impassioned call for the centering of black experience as a theological presupposition has helped us think more broadly about the meaning of divine, liberating activity in our world. And D’Angelo—a real life p.k. (preacher’s kid) of a Pentecostal minister—answers the call with a melodious response that renders its own reading of what it means to think of god as working on the side of the oppressed.

Even as D’Angelo tells us that Black Messiah isn’t about religion, it sure gives us religious and spiritual musings to consider. Andrew Wilkes likens the “justice-evoked religious sensibility” of the album to a “Pentecostal Piety,” its own subversive civil religion. From Ferguson to Egypt to Occupy Wall Street a black messiah is the very point, a collective idea of liberation to which we should all aspire. In D’Angelo’s vision, the work of the divine is as much a response to “the way she made the congregation squirm” (“Sugah Daddy”) as it is an invocation that reminds us “you got to pray” (“Prayer”). D’Angelo wisely diffuses the myth of the lone charismatic (black) male[3] in the album’s introduction. “Black Messiah is not one man,” he says, “it’s a feeling that, collectively, we are all that leader.”[4]

Beyond the literal calling for black liberation in the sermonic voices at the beginning of “1000 Deaths” and the theological impetus in “Prayer,” Black Messiah drives the idea of liberation home in multifaceted ways: freedom to “Really Love;” freedom to deny the adverse effects of betrayal (“Betray My Heart”); and even freedom to deliver a foreboding warning of potential love lost (“That Door” and “Back to the Future Part II”). Word is that D’Angelo released Black Messiah in part due to the nationwide responses to the killings of unarmed black folks and the subsequent failed indictments. “All we wanted was a chance to talk, ‘stead we only got outlined in chalk” (“The Charade”). All of these features reveal the complexities of navigating between a present where the devaluing of black lives is palpable, and a future where black love can thrive—the already and the not yet.

Is D (as I am intimately familiar with Mr. Archer) the Prince of our time? (Well, no, because as my husband rightly noted, Prince is the Prince of our time). George Clinton and Parliament Funkadelic combined? Sly Stone? Marvin Gay? (the more obvious comparisons), or Jimi Hendrix? Sun Ra? (the less apparent ones). Many comparisons exist, yet none quite capture precisely who D’Angelo is and what exactly he does. D’Angelo is the messenger and Black Messiah his muse. He calls to the diaspora hauntingly in “Till It’s Done (Tutu),” “with a need for love, what have we become?” Black Messiah is indeed “devastatingly great” and it is as intriguing for its musical and stylistic contributions as it is for its ability to help us theorize (yes, theorize) about what a black messiah might look like in an era that seems to openly despise black bodies.

Giving up certainly ain’t that easy, and through his soulful delivery, D’Angelo has provided us with a much-needed moment to collect ourselves, to remember, and to believe “that some day we will rise.” D’Angelo has reminded us in ways that only the most prolific artistry can, that #blacklivesmatter, and not just “In Another Life.” The resurgence of black love pervading in Black Messiah has definitely been worth the wait.

Comments on ““Black Messiah” and the (Re)Surgence of Black Love”