loading...
By Christopher Cannon Jones November 20, 2018 Comments Off on From Protestant Supremacy to Christian Slavery

Early in the morning on April 7, 1712, a group of approximately thirty enslaved individuals launched a dramatic revolt, killing several white New Yorkers and setting fire to a home. After the colonial militia successfully repelled the insurrection, the authorities arrested, questioned, condemned, and executed twenty-one suspected rebels. In the months that followed, New York’s legislators passed multiple acts restricting the activities of enslaved Africans.

In historian Katharine Gerbner’s excellent new book, Christian Slavery: Conversion and Race in the Protestant Atlantic World, the rebellion and its aftermath are markers of an important moment in the history of religion and the codification of racial slavery. Two of the enslaved New Yorkers accused in the 1712 revolt were students at a school run by Anglican missionary Elias Neau, who represented a small but increasingly influential cohort of missionaries who championed increased outreach to enslaved Africans around the Atlantic World. After arriving in New York in 1701, Neau went to work both preaching to the enslaved and lobbying for legal reforms to support slave conversion. In the wake of the rebellion, however, white planters targeted Neau, his school, and two of his pupils. The planters charged that conversion to Christianity undermined the social order that structured colonial society. The colony’s assembly passed a series of laws that undermined those earlier lobbied for by Neau and tightened restrictions on slave literacy and conversion.

Christian Slavery traces the transition over the course of the seventeenth and eighteenth centuries from an ideology of “Protestant Supremacy,” in which “Protestant planters claimed Christian identity for themselves” while denying it to enslaved Africans and Indians, to one of “Christian Slavery,” which “reconciled Protestantism with bondage” and promoted the conversion of enslaved people (2-3). Christian Slavery makes two central contributions to the existing scholarly literature. The first concerns the replacement of religion with race as the organizing principle of slave societies. Gerbner places the emergence of whiteness as a social, political, and legal category in a transnational and cross-denominational context, highlighting both the connections that linked divergent Protestant groups and the influences of Spanish and French Catholic practices on English and Danish slave law. The second key contribution of Gerbner’s work is her reassessment of Christian conversion for enslaved Africans in the Americas. Arguing that “historians have overstated the significance of emotive worship for the appeal of Christianity” to the enslaved, she emphasizes “the powerful draw of literacy … associated with Protestant conversion” in the seventeenth and eighteenth centuries (11). 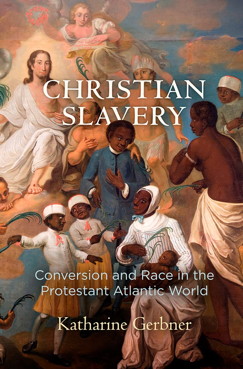 Christian Slavery is organized into eight thematic chapters that move broadly chronologically. The first two chapters place the Church at the center of England’s seventeenth-century overseas empire. Pushing back against assessments of early English imperialism that relegate religion to secondary status, Gerbner argues that ministers and missionaries “played a fundamental role in shaping Protestant planter culture,” pointing to the “overlooked” activity of Anglican clergymen in “reciting and reinforcing” slave codes like those enacted in Barbados in 1661. “It was through the mouths of ministers,” the author explains, “that the brutal slave laws … were enunciated, year after year” (31-32). While later missionaries would challenge the ideology of Protestant Supremacy, their forebears were crucial in its implementation. The gradual shift from Protestant Supremacy to Christian Slavery was initiated not by Anglicans, but rather by Quakers in the West Indies, a subject explored in depth in chapter three. While often imagined as the abolitionist crusaders they would become in the eighteenth century, Quakers in the 1600s saw no discrepancy between their religious beliefs and the enslavement of others and “were at the forefront of the attempt to adapt slavery to Christianity” (50).

Gerbner is at her best in not only tracing shifting attitudes and policies toward slavery across time, but also when elucidating the connections that linked Protestant ideals across denominations. While the writings of Quaker George Fox, for example, attracted the ire of colonial officials and planters, they found a receptive audience among Anglican divines like Morgan Godwyn, who relied heavily on Fox in crafting his own treatise on missions to the enslaved in The Negro’s and Indians Advocate (1680).

Later chapters pick up on these themes of interdenominational ties, moving from Quaker influence on Anglican activities to the connections linking English missionary organizations like the Society for the Propagation of the Gospel in Foreign Parts (SPG) and Society for the Promotion of Christian Knowledge (SPCK) with the Moravians, a German Pietist group who launched missionary campaigns for the enslaved population of the Danish West Indies. Mining the Dutch, German, and Dutch creole records kept by Moravians, Gerbner traces a similar trajectory from Protestant Supremacy to Christian Slavery. But the real pay off of the book’s final chapters is Gerbner’s reassessment of Afro-Caribbean conversion. The Moravians’ “vision of conversion,” Gerbner stresses, “was at odds not only with white colonists in the established churches, but also with the black Christians they met” (141). In the minds of both enslavers and the enslaved, Christian baptism was tied closely to manumission and reserved for only a select group of favored slaves. The Moravians, by contrast, hoped to convert the masses, while also maintaining that the conversions of many professed Christians, both Black and white, were insincere and insufficient. True conversion was not something learned through reading and study, but rather obtained through a change of heart. Rejecting the links between temporal and spiritual freedom, Moravians simultaneously “created an alternative hierarchy that placed true Christians, black or white, over all others, black or white” and reified the centrality of slavery to the standing social order (155). While initially open to the idea of enslaved converts learning to read and write as part of their catechism, Moravian missionaries later forbade slave literacy, concerned about the true motives of those who sought baptism.

A similar phenomenon occurred in New York City. Here again, the events surrounding the 1712 revolt are instructive. Even before the rebellion occurred and the colonial assembly responded by moving to restrict slave literacy, Elias Neau grew concerned “that his catechumens came ‘only … for the Books.’” But Neau ultimately continued “dispers[ing] a great many of the little Tracts” from the SPG, worried that if he stopped then attendance at his school would plummet (117). Gerbner’s close reading of these and other sources convinces her that Christianity’s appeal for the enslaved lay less in resonances with forms of worship and more in the promises literacy provided, including especially the possibility of emancipation. The implications of this argument, especially for scholars interested in Black intellectual history, are significant.

Christian Slavery is clearly written and compellingly argued. Katharine Gerbner’s introduction of both “Protestant Supremacy” and “Christian Slavery” to the lexicon shapes our understanding of religion’s role in creating discourses of race and racism and builds on other recent scholarly efforts, including those of Rebecca Anne Goetz, Heather Miyano Kopelson, and Travis Glasson. The book’s conclusion argues that the emergence of Christian Slavery in the early eighteenth century set the stage for both the evangelical revivals and overseas missions to the enslaved that followed and the proslavery Christianity its leaders promoted. As I read, I was reminded of Emily Conroy-Krutz’s book on Protestant missions and Christian imperialism in the nineteenth century, a movement that assumed the cultural and religious superiority of white Protestants. Perhaps more than anything else, Katharine Gerbner’s Christian Slavery lays bare the religious roots of white supremacy – a legacy that remains with us today.

Christopher Cannon Jones is a Visiting Assistant Professor of History at Brigham Young University, where he teaches, researches, and writes about religion, race, and nation in early America and the Atlantic World. Follow him on Twitter @ccjones13.