loading...
By Jessica Parr January 30, 2018 Comments Off on Race, Freedom, and Extermination in America and the Atlantic World

Kay Wright Lewis’s new book, A Curse Upon the Nation: Race, Freedom, and Extermination in America and the Atlantic World (University of Georgia Press, 2017), analyzes the ways Black and white extermination influenced the development of slavery. Lewis draws from newspapers, political tracts, correspondence, and court documents to describe the perseverance of racialized fears from the early seventeenth century through the twentieth. The result is one of the first sustained studies about extermination as a historiographical approach to slavery and African American history.

On the one hand, African Americans feared—for good reason—their extermination by white Europeans, as legal, religious, and economic policies made the transatlantic slave trade a pillar of the Atlantic economy. On the other hand, white Europeans, Lewis observes, lived in fear of slave rebellions. As a result, they instituted ever-more defenses of slavery and restrictions on Black mobility. In fact, Lewis argues white preoccupation with potential slave revolts, Black rebellion, and Black fear of death at the hands of white violence had long-lasting effects that far outlasted slavery. This helped to fuel the Civil War, derailed Reconstruction, shaped Jim Crow, and influenced civil rights strategies.

Lewis begins by locating “the language of extermination” in early European print culture. This language applied initially to Native Americans, and then to Africans as well. Among other white writers, she observes in a 1710 sermon, Cotton Mather’s discussion of “just wars” in the Israelite wars against Ammonites. According to Lewis, Puritans viewed themselves “like the Hebrews” who believed they “fought wars for self-preservation,” but in fact, engaged in “wars of conquest” (24). Encompassing the use of violence beyond conventional notions of war, “just war” was used to justify tactics used to control lands and to secure commerce and jurisdiction in strengthening European power in the Atlantic World. In the treatment of enslaved Africans, this “justifiable” violence could include a combination of the physical and symbolic, such as burying the bodies of lynched African Americans away from their kin. The silencing of African-Americans, too, was a form of extermination.

Fears about extermination pervaded Black-white race relations. English philosopher John Locke predicted that the enslavement of West Africans by Europeans had the potential to become a threat to Europeans. Even slave owners like William Byrd II and Thomas Jefferson observed that the transatlantic system created an environment where “a state of war always existed between master and slave” (23). Slaves of mixed heritage—whether African and Native American, or African and American ancestry—were still, in Jefferson’s view, “an incompatible element of the Republic” (23). Lewis’s analysis continues from the colonial period, through the complexities of the American Revolution, arguing that this language of extermination was ultimately a contributing factor to the policies that resulted in the Civil War, and later Jim Crow. 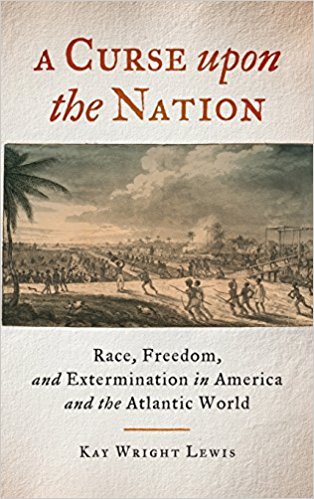 The nuance and intricacy with which Lewis makes her case is among her book’s many strengths. In her discussion of subjugation in early Virginia, for instance, she presents evidence from both Black and indigenous sources. In the wake of the decimation of Native Americans, Lewis notes that the survivors were “marginalized” and “lumped together with Africans as savages and racial others” (24). She connects differences in English and Native American military culture with English religious justifications for expansion and the continued extermination of Native Americans. Furthermore, she produces a detailed analysis in racial attitudes of English settlers, including Edward Waterhouse and Captain John Smith, in which Waterhouse and Smith disagree over the degree to which remaining Native Americans could be “civilized.” Both men see “civilization” in racial terms, and as a means to reduce the perceived threat to white settlement. Yet Waterhouse disagrees with Smith about the capacity of Native Americans to be civilized. The result is more aggression toward Native American populations (24).

Lewis positions the language of extermination not only within the dynamics of the transatlantic slave trade, but also describes the ways in which this language applied toward indigenous peoples. She traces the “supremacy of white power” in early settlement, and then draws it out into the broader Atlantic world, exploring how this “state of war” was pertinent to Europeans’ perceptions of Africa. The specter of Africa was also constant—as Locke noted, those who were physically separated from Africa were not separated from Africa at the intellectual level.

A second strength of this book involves its ambitious chronological scope. Several scholars, including Paul Gilroy, John Thornton and Anne Bailey have helped to broaden discussions of Africans in the Atlantic World. Kay Wright Lewis contributes to this important discussion by allowing readers to see a sustained process of racial thought across several centuries. Indeed, some of her analysis comes from discussions of influential twentieth-century figures like Marcus Garvey, who saw the fear of white supremacy as an argument for African Americans to relocate to Africa. But Lewis also notes that this fear of violence shaped the Civil Rights Movement. For instance, Martin Luther King Jr. argued against violent responses to oppression, because he feared that Black violence would be met with escalating white violence. Other civil rights leaders such as Robert F. Williams believed that “times had changed,” and that no single strategy alone was likely to be successful in the struggle for freedom. As with Lewis’s treatment of violence in earlier contexts, her analysis of the fears of extermination remain nuanced, even as she discusses twentieth-century outcomes that permeate a long history.

Finally, Lewis notes the dynamics that historical memory plays in shaping the language of extermination. The specter of forced labor by Africans and their violent removal from the African continent remained consistent, even after the official end of the transatlantic slave trade. And while Europeans may not have named or spoken of the African diaspora, Lewis’s research demonstrates that on some levels, they recognized its existence. This aspect of her discussion will resonate with those who follow the recent research on historical trauma and the psychology of slavery. For these reasons, Lewis’s book is a welcome contribution to the scholarship on race and slavery, and a must-read for scholars of race.