Barbados was the birthplace of British slave society and the most ruthlessly colonized by Britain’s ruling elites. They made their fortunes from sugar produced by an enslaved, “disposable” workforce, and this great wealth secured Britain’s place as an imperial superpower and cause untold suffering. In The First Black Slave Society: Britain’s “Barbarity Time” in Barbados, 1636-1876, Hilary McD. Beckles explores the inhumane legacy of plantation society that has shaped modern Barbados and charges the inheritors on both sides of the power dynamic to face that truth in order to effect real change and reparatory justice. *This excerpt from the preface was reprinted with permission from The University of West Indies Press.

It now requires a seismic shift in historical imagination to recall that Barbados, the beautiful Caribbean island known today for its social amiability and political civility, was Britain’s colonial site of the first “black slave society” – the most systemically violent, brutal and racially inhumane society of modernity. The abundant empirical evidence that illustrates this status and reputation echoes through the archives of the island and resonates through those in Britain, the United States and the wider Atlantic world.

Images of this past are found in mounds of manuscripts, but the living memory is seen most clearly in the faces and facades that populate and punctuate the island’s landscape. Discerning researchers need not end there. There is living testimony, equally riveting and revealing, to be mined by delving into the mindscape of descendants.

The society has a distinct social character and cultural identity that are rooted in its slavery past. Public perceptions of the nation remain linked to the legacies of slavery. Once described by an economist as the Caribbean model of the “pure plantation,” first to be reformatted as a black slave society, Barbados remains the last to loosen the political stranglehold of plantocracy.

The genealogy goes back to the decision taken by English investors on the island in the late 1630s to rebuild their economic enterprises upon the foundation of racial debasement and mass enslavement of imported Africans. This had immediate and far-reaching consequences. It economically transformed the colony and redefined its social environment and that of other Caribbean colonies. Critically, it accelerated the pace of mass enslavement of Africans as the basis of Europe’s colonial projects in the Atlantic world.

The new economic system needed precise operational rules for the application of market principles to labour in order to facilitate wealth accumulation and ethnic dominance. The transition from a society that included a minority of enslaved Africans to one conceptualized and built entirely around the legally assured principle of property rights in African bodies was innovative and transformative. In 1636, a political directive provided that all Africans brought to the island were to be received as lifelong chattels. In 1661, the legislature passed a comprehensive “slave law” that consolidated this culture and surrounded it with additional reinforcements. Not only were Africans deemed chattels, but subsequent laws also defined them as “real estate.” The slave laws were not intended to protect lives but to secure the investment value in those lives. Africans were given but one reason to live: to ensure that they served the investors’ wealth creation.

By the 1650s, England was grandly celebrating Barbados as its premier global investment. The island had provided impetus for the breakthrough into profitable colonialism the nation had long desired but found irritatingly elusive. Henceforth, the national discourse on trade and economic growth, wealth creation and mercantilism, sovereignty and security, and ethnic identity were tightly tied to the colony’s performance as a black slave society. 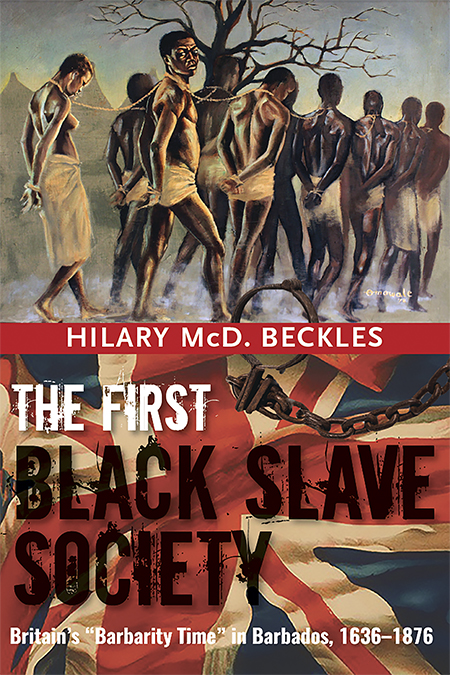 In Barbados, capitalism and slavery were of greater importance to imperial investors than the politics of Crown versus Cromwell. The violent brutality that attended the Civil War, however, evoked considerable outcry as Englishness descended into a moral quagmire that would tarnish the legitimacy of both kingdom and republic. However, there was no corresponding discourse on the inhumanity, immorality and brutality of the national reliance on slavery, and the enslaved became the principal source of England’s new wealth. A new England came into being with Barbados, and a new Barbados was created by England.

Memory of this history still percolates within the consciousness of the community; memory survives despite the persistence of political and cultural forces that try to suppress it. Tourism brochures, for example, present glittering images of the island as a “paradise on earth” and reduce the past to romanticized remnants of the slave-based civilization. In these politically engineered ecologies of environmental enchantment, golden sand beaches and sugar barons’ bungalows mask a persistent black poverty polarized in communities of crumbling chattel houses. They serve in an indirect way to suppress the fading but resilient truth: that this proud, politically successful postcolonial nation-state was the home of England’s egregious experiment with African enslavement.

The image of gentle waves rolling upon bleached beaches against a backdrop of serene sunsets has become a part of the new Barbados brand. It has not washed away, however, facets of the island’s history as a monument to immeasurable human misery. The vestiges are to be found in dozens of sugar plantation villages.

White inheritors of the wealth of criminal enrichment remain politically unrepentant and financially dominant. Despite their political ascendancy in contemporary society, black descendants remain marginalized within the wealth-management and ownership structures and cultures of the national economy. Political power has been no balm for the physical and psychic pain associated with three centuries of plantation tyranny. Passions from the past continue to shape social understandings of the present. The discontent brews beneath the social surface. It boils and spews periodically in the form of popular protest but quickly evaporates; the society settles again and the sins of slavery sink once more to the bottom. But they are not forgotten.

Some wish to forgive, but none to forget. To litigate, it is said, is to promote hate. Yet the reparatory justice discourse, like sugar cane, is growing everywhere. On both sides of the Atlantic the official narrative of slavery is still read and received as “old story time,” a past devoid of political agency and best set aside. A rising popular discourse, however, is calling for radical agency and social justice, based on research into the judicial origins and ending of the enterprise.

The first black slave society was an English innovation rather than its invention. For centuries chattel slavery had been a characteristic of the Mediterranean and east Atlantic slave routes. From the fifteenth-century Portuguese island colonies at São Tomé and Cape Verde in the east Atlantic, where chattel slavery was incubated and commercialized, it was transferred to Brazil and the Caribbean in the West Atlantic in the early sixteenth century.

The enslavement of Africans on the sugar plantations of São Tomé by the 1530s undoubtedly represented the first great stride towards the creation of the Barbados black slave society. The Spanish took the chattel enslavement of Africans to Cuba, in the northern Caribbean, in the 1540s. Inexorably, it spread to the eastern Caribbean and found its most fertile environment in the plantation complex of Barbados exactly a century later. Upon this small rock, England gained its first economic success by building the first complete large-scale black slave society. By 1650, it was universally recognized for its economic prosperity, physical brutality and social inhumanity towards Africans. English managers of the model were not to be deterred, however; they pressed on and redefined for the long term the primary character of Europe’s and the Americas’ relationship with Africans.

It was the beginning of a new era in global economic development and race relations. With the black slave society, England’s entrepreneurship forged and refashioned the world economic order. Investors and imperial administrators seized the moment and abandoned traditional labour values and relations. The sugar plantations, stocked with thousands of easily replaceable enslaved Africans, spun super-profits. The entire island was quickly stripped of an internal frontier and transformed into endless fields of sugar plantation. Record levels of white-owned wealth and black deaths defined the slave plantation as a “best practice” in the new business culture. Barbados represented for the English a symbol of global enrichment. Investors representing the English royal family and its ruling elites, including the military and clergy, rushed to the island to secure their share of the wealth.

A comprehensive understanding of this English creation continues to stimulate the research capacity of historians. In my quests I have benefited from the seminal studies on slavery in ancient and modern societies by Moses Finley and Eric Williams, and more recently the mentoring masterpieces of David Brion Davies and Orlando Patterson. The conceptual power and empirical rigour of these scholars still serve as sources of sensitization. I continue to find in their mega-narratives considerable scope for creative comparative study.

I wish this work to serve as a reminder of that tragic time when England and later Great Britain rose triumphantly to claim creation of the first black “slave society” as a national cultural achievement. There is now a call from Barbados and other Caribbean societies for Britain and Europe to recognize their crimes of chattel slavery and native genocide and to repair the damage. The historical and legal evidence show that there is a case to answer.

Sir Hilary Beckles is the Vice-Chancellor of The University of the West Indies. As Professor of Economic and Social History, he won the first Vice-Chancellor’s Award for Excellence in the field of research. He is a distinguished University administrator, internationally reputed historian, an expert thinker and strategist in higher education. He has lectured extensively in Europe, the Americas, Africa and Asia, and has published over 100 peer reviewed essays and 14 scholarly books and monographs on subjects ranging from Atlantic and Caribbean History, gender relations in the Caribbean, sport development and popular culture.

Comments on “On Barbados, the First Black Slave Society”