loading...
By Dan Berger July 17, 2018 Comments Off on The National Council of Negro Women and the Black Freedom Struggle

When Doug Jones defeated Roy Moore for the Senate seat previously occupied by Attorney General and career racist Jeff Sessions last fall, many commentators agreed that Black women proved the decisive group ensuring that Jones, a Democrat who had prosecuted two of the men who murdered four Black girls by bombing a Birmingham Church in 1963, defeated the Christian fundamentalist Moore, who had faced multiple accusations of preying on young women on top of his incendiary racism and homophobia.

After Jones’s victory, many people tweeted using the #ThankBlackWomen hashtag. Others, from national politicians to grassroots organizers, said “thank you” is not enough. Senator Kamala Harris echoed the progressive commonsense when she tweeted “we need to do more than congratulate them. Let’s address issues that disproportionately affect Black women—like pay disparity, housing & under-representation in elected office.” Charlene Carruthers, the National Director of BYP 100, was even more direct: “No amount of verbal appreciation will do us justice,” she wrote in response to the hashtag celebrating Black women’s role in electing Jones. “Turn over the money, resources and power, then we can talk.”

The often unheralded activism of Black women on these and other issues has been central to the robust outpouring of books on Black women’s history in the last decade. Historians and others have produced cutting edge works exploring the intellectual and political pursuits of Black women across a wider historical time period, geographical scope, and set of issues than many scholars had previously explored. The result has been nothing short of amazing. From the trenchant studies of Black women and convict leasing by Talitha LeFlouria and Sarah Haley to biographies of individual activists such as Eslanda Robeson and Florynce Kennedy to reconsiderations of women’s organizing in the Great Depression and early Cold War through the Black Power era in the 1960s and 1970s, scholars have illuminated the complex desires, visionary demands, and rigorous debates that characterize what pop culture has titled “Black girl magic.”

In Strategic Sisterhood: The National Council of Negro Women in the Black Freedom Struggle, Rebecca Tuuri extends that conversation through an examination of one of the longest-standing Black women’s organizations in the United States. Tuuri, a historian at the University of Southern Mississippi, provides a richly sourced overview of the NCNW over five decades—from its founding in 1935 through its international work in the mid-1980s. The book’s short epilogue brings the story up to the present, when the NCNW continues its mission to “lead, develop, and advocate for women of African descent as they support their families and communities.”

Unlike many of the activists and organizations that preoccupy several of the exciting recent works in Black women’s history, the NCNW is not a radical organization. In fact, it is far from it. From Mary McLeod Bethune to Dorothy Height and beyond, many of the Council’s leading figures “saw their roles within the council as observers, financial supporters, and lobbyists, not as people engaged in direct action” (13). From haughty social functions to partnerships with the federal government and corporations, the Council has been a standard bearer of the Black women’s club movement and its middle class milieu.

The club movement has been most synonymous with the “politics of respectability” argument that historian Evelyn Brooks Higginbotham first described in her landmark book on the Black women’s club movement, Righteous Discontent. While more radical critics have taken up the phrase to chastise liberal or conservative dismissals of disruptive social movements, Higginbotham had a different meaning in mind. In a 2015 interview, she clarified that the politics of respectability is the practice of “standing on a moral authority to fight for your rights.” Rather than a bludgeon against more radical methods, Higginbotham says, the politics of respectability describes the effort—regardless of ideology—to claim the moral high ground in the process of political battles. 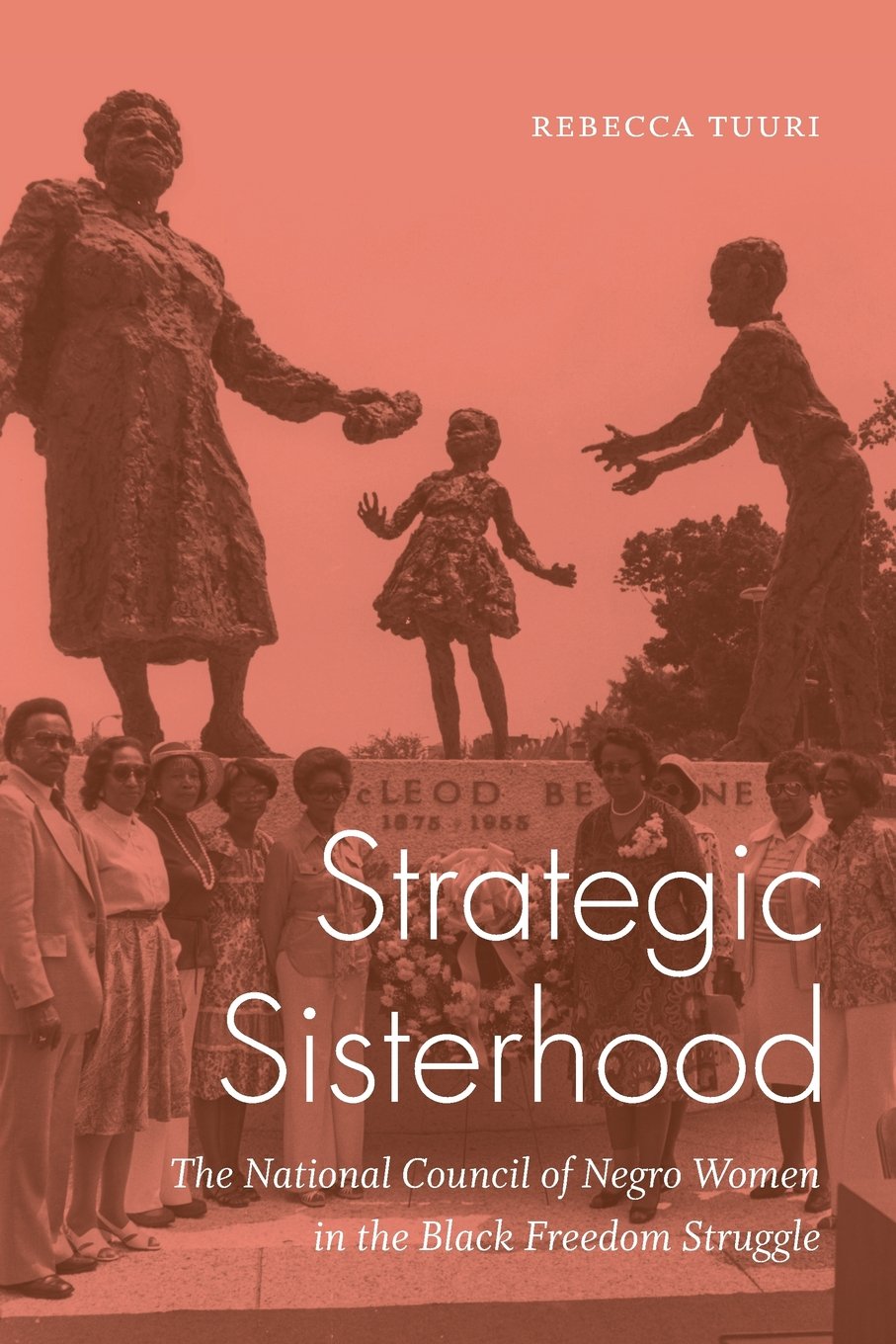 Tuuri’s account of the NCNW takes seriously this notion of respectability politics: not as anti-radicalism but as a mode of forward-looking self-representation. This more expansive notion of political engagement enabled the NCNW to support programs that conflicted with its otherwise modest ideological goals. Indeed, Tuuri shows, one of the most fascinating things about the Council is the way its moderate disposition supported truly radical initiatives. Most of the book is concerned with the council’s work during the civil rights period of the mid-twentieth century. The Council in those years grew to occupy an interesting middle ground: parlaying the moderate wealth and social connections of its members to advance the movement’s work through often behind the scenes work to establish vital community programs.

Horrified by the violence in Mississippi, the Council engaged the growing civil rights movement by sponsoring interracial dialogue groups under the name “Wednesdays in Mississippi.” The limits of this approach, such as its inability to engage fundamental questions of power, soon became apparent, however, and the Council evolved in response to movement demands. “Wednesdays in Mississippi” gave rise to “Workshops in Mississippi” in 1966, and the Council “redefined itself as a liaison organization between Black women in Mississippi and government agencies distributing War on Poverty funds” (108). Inspired by the War on Poverty’s injunctive to include the “maximum feasible participation” of the poor, the Council funded a number of initiatives pursued by radical women in the civil rights movement. When the Council secured a large grant from the Ford Foundation in the mid-1960s, it hired a number of SNCC organizers and other young women radicals to support women-led community organizing in more than a dozen states in the Midwest, South, and Northeast, as well as California.

Inspired by the Black Power movement, the Council changed its slogan from “Faith, Leadership, Culture” to “Commitment, Unity, and Self-Reliance.” The new slogan described the Council’s approach at the time, where a conservative discourse of self-reliance and a heteronormative family ideal was put in service of grassroots community organizing. Under Dorothy Height’s savvy leadership, the NCNW utilized white philanthropic networks to support some local Black Power initiatives, just as the council was itself shaped by the turn to Black Power in the late 1960s. The Council was particularly involved in the Mississippi Delta, where it funded a pig bank and other local agricultural initiatives to alleviate hunger among Black communities under the leadership of Fannie Lou Hamer; worked to “implement the federal low-income homeownership program Turnkey III, which brought together a local private builder, the local housing authority, and a home buyer to help low-income people slowly purchase their federally subsidized homes” (132); and advocated for expanded childcare access to support working mothers.

Here and elsewhere, the Council’s fear of challenging the government directly and its use of public-private partnerships hampered its success. The Council’s programming could shift with the mood of its funders, and its alliance with some of the same governmental or corporate entities responsible for Black immiseration stymied the Council’s efforts. When, for instance, the NCNW partnered with USAID to support community projects in southern Africa, “USAID placed restrictions on what the council could and could not do” (198). And while the Council was able to use “nearly $2 million in USAID funding… to [support] African women in the 1970s and 1980s,” it also lost most of its funding when Ronald Reagan assumed the presidency (202-03).

Strategic Sisterhood is a focused history of the NCNW. Tuuri gives us the inside view of the Council, engaging with the broader social context only insofar as it impinges on the story of the Council. Some additional attention to the broader currents of the time would help situate—and complicate—the Council’s work. Such contextualization might have usefully elaborated key concepts of the book as well. Namely, it would be helpful to hear more about the strategic considerations underpinning both how the NCNW conceptualized “sisterhood” as well as how some of its staff and partners understood sisterhood—or, for that matter, strategy. As we know from histories of the NAACP and other large national or transnational nongovernmental organizations, local chapters often differ in style, tone, and substance from the leadership. Hearing more about how and where those debates appeared and were negotiated would provide a fuller accounting for the NCNW’s work.

Nevertheless, Strategic Sisterhood provides an exemplary account for understanding the often blurry lines between moderates and movements. Many at the grassroots are rightly concerned that large nonprofit organizations will co-opt their initiative. Yet Tuuri shows that moderate organizations can be equally and equitably pushed and shaped by movement efforts. Understanding how people, ideas, and resources move between those blurry lines remains a critical task for scholars, activists, and anyone else interested in a world where inequality is a historical relic rather than a defining feature of everyday life.