loading...
By Daniel HoSang November 7, 2018 Comments Off on The Life and Legacy of Political Scientist Hanes Walton, Jr.

In 1970, Vincent Harding contributed an essay to the inaugural issue of the Journal of Black Studies titled “Black Students and the Impossible Revolution.” Harding described the “black surge in academic matters” that had come to “sense the bankruptcy of American higher education.” Black students were demanding a fundamental transformation of higher education, including a “call for total reorganization of the disciplines and their traditional boundaries.” Such a transformation would “question the meaning of supposedly scholarly objectivity when scholars and their disciplines could foster against black people lies of silence and words and ignorance for so long.” For Harding, the transformation of the discipline and knowledge production was intimately connected to the reconstruction of political life more generally. In another contemporaneous essay, Harding argued that these conditions placed Black scholars and faculty in a particularly vexing position. To ascend within the American university was to risk becoming incorporated into a “misleading . . . mystic, universal fellowship of objective, unpigmented scholarship” that was “so often cut off from the churnings” of Black life.

The predicament described by Harding is familiar to many Black academics and insurgent scholars today, who must navigate, often on a daily basis, a desire to maintain one’s political commitments and human solidarities while not perpetually offending the strictures and conventions of one’s colleagues, institution, and discipline. But these conditions were even more stark for an earlier cohort of scholars who were at the forefront of efforts to desegregate their respective fields and advance professionally while maintaining connections to the aspirations and experiences of Black publics beyond the campus gates.

Hanes Walton Jr. became the first person to receive a PhD in government at Howard in 1967, placing him at the center of the civil rights generation of Black scholars who contended with many of the trials described by Harding. Walton, who passed away in 2013 after a forty-five-year career at Savannah State College and the University of Michigan, authored eighty articles, more than two dozen book chapters and twenty-five books and volumes, including two foundational textbooks. Described as the “Dean of Black Politics” for his record of scholarship, mentorship and field building, Walton is the subject of Robert Smith’s short biography, Hanes Walton, Jr.: Architect of the Black Science of Politics.

Smith’s subtitle is instructive. As Walton entered the field in the late 1960s, political science increasingly understood itself as a discipline modeled on the positivist commitments of the natural sciences, focusing on methodological concerns that sought to predict and interpret the political choices and behavior of individual subjects. Much less consideration was afforded to the ways that historical conditions, institutions, and culture shaped configurations of power. Issues of racialized subordination and Black political formation received little serious attention altogether. And as Robert Vitalis and Rebecca Blatt has recently demonstrated, the origins of some parts of the discipline, particularly the subfield of international relations, were intimately tied to white supremacist and colonial political visions.

Walton experienced these exclusions directly. Particularly at the beginning of his career, he published much of his scholarship on political parties, Southern politics, civil rights regulatory enforcement, and Black political traditions in smaller or regional journals. The discipline’s main journals rarely featured such work. Walton helped to establish the National Conference of Black Political Scientists (NCOBPS) in 1971, which drew much of its intellectual energy and labor from faculty appointed at HBCU’s. Walton also continually pressed the American Political Science Association (APSA) to recognize and expand the study of Black politics within the discipline. Tying the marginalization of the study of Black politics to larger social forces, he noted in one article “the relative paucity of disciplinary work that tends to support the struggle against racism, and the overwhelming influence of work that tends to support the maintenance of racism.” 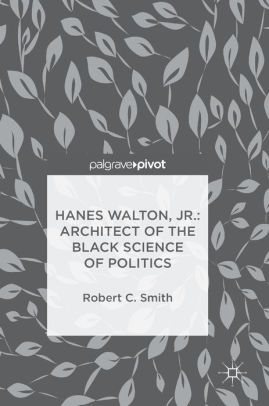 In 1985, Walton published Invisible Politics: Black Political Behavior, described by Smith as a “stunning and relentless critique of the behaviorist approach in the study of Black politics.” Yet the critique was less about the primacy of the behaviorist paradigm per se—Smith explains that it was the tradition in which Walton was trained—and more about its failure to incorporate Black experiences as objects and thematics of study. In more specific terms, Walton was critical of data collection methods and designs that failed to adequately sample Black subjects and thus offered interpretations of “black political behavior” based on “tenuous empirical evidence.”

While Walton’s scholarship was often pluralist in its commitments—engaging questions of historical, institutional, and cultural formation—the vision he pressed for the discipline resided more in the incorporation of Black experiences (and data) into the positivist paradigm. Walton sought to harness the behaviorist and empirical foundations of the discipline in order to explicate and engage issues of racial inequality. There is today a vibrant and growing subfield of Racial and Ethnic Politics (REP) within APSA and at least three journals centered on this scholarship. Walton’s research, advocacy, teaching, and mentorship played a significant role in creating the conditions for this growth. Yet the mainsprings of REP scholarship today continues to focus on political behavior studied through positivist methods, largely mirroring the dominant orientation of the discipline. And the marque journals within mainstream political science are still dominated by quantitative work centered on statistical modeling. The limited scholarship on race that appears adheres to these paradigms.

Fifty years ago, Harding argued that the academic disciplines themselves, with their pretense of objectivity and universality, constituted the very groundwork of racial violence and subordination. It was these norms and conventions that had to be upended in order to bring “a new self-loving, black presence into an old, white-created context” of the university. Yet for scholars like Walton, the opportunities to overturn these conventions were limited. Trained in the dominant modes of the discipline and forced to develop paradigms of teaching, scholarship, and professional development that would be cognizable within their fields, they had little space to tarry with the kinds of issues posed by Harding. They secured instead an accommodation within the main research paradigms of political science in order to build a “Black science of politics,” a subfield that would largely extend rather than displace the central theoretical and methodological commitments of the discipline. This indeed is how nearly every mainstream academic field managed the insurgent demands of the student mobilizations of the 1960s and 1970s—offering some accommodation at the margins while leaving the main architecture of the discipline intact.

Smith’s biography follows the same “objective” conventions that both enabled and foreclosed Walton’s scholarship. While Walton was a noted teacher and mentor who worked with a series of influential political scientists including Cathy Cohen, Lester Spence, and Katherine Tate, Smith includes few personal anecdotes about Walton or recollections about their relationship—Smith collaborated with Walton on a number of works and is himself a senior figure in the field. Instead, it hews to a neutral summary of Walton’s scholarly work, divided across four brief chapters that describe the central elements of his publication and professional trajectory.

Such intellectual biographies are important, in part because they reveal some of the hidden genealogies of Black intellectual traditions in particular disciplinary formations. Walton did much of this work collaboratively, both in the form of co-authored or co-edited publications and in the building of groups like NCOPBS. It’s an important reminder of the collective and participatory culture that helped to build the field in the face of continued hostility from mainstream scholars and institutions.

Yet one is left to wonder about the more intimate and subjective facets of Walton’s experiences in the academy that cannot be mined from his body of publications. How did he contend with the closures and distortions of the discipline, and how did those shape the political commitments and dreams he brought to bear on his work? Perhaps more importantly, what might those experiences reveal today about the possibilities for realizing the kinds of transformative imaginaries for the university and the disciplines offered by Harding? One senses that Walton would want us to struggle with these questions, even as we recognize and celebrate his distinguished career.

Daniel Martinez HoSang is Associate Professor of Ethnicity, Race and Migration and American Studies at Yale University and a scholar of racial politics, political culture, and comparative ethnic studies. He is the author of the award-winning book, 'Racial Propositions: Ballot Initiatives and the Making of Postwar California' (University of California Press, 2010); and co-editor, with Luke Harris, Kimberele Crenshaw, and George Lipsitz of 'Seeing Race Again: Countering Colorblindness Across the Disciplines' (University of California Press, 2019).