In 1910, 48-year-old Rebecca Sallee fell into an open hole on a city street in Harrodsburg, Kentucky, as she made her way to a prayer meeting. The severity of the Black laundress’s fall soon became clear. The accident had caused severe injury to her back, and she couldn’t draw a breath without pain. Several days after her accident, Sallee met a white acquaintance on the street and told him of her injury. She then asked “What do you think of these holes being left open around on the street?” When he said that he didn’t know, Sallee responded that she “thought she would sue the town.” The man replied, “Aunt Becky, you ought to get you a crutch or two crutches, and if I was you I would go home go to bed, and send for the Doctor.”  To this white man, suing the city did not seem like a viable plan for an injured black woman. Sallee, nonetheless, hired an attorney and sued the city of Harrodsburg for $1,500 in damages for “great bodily pain and mental anguish.” 1

African Americans challenged discrimination and asserted their rights in many different venues and with many different methods throughout American history, adapting to the situation on hand. Often, their choices were pragmatic, based upon judgements about what methods might work best at certain times, and on trial and error, as they tried certain methods, only to try another when that one did not work. Many of their actions in this regard have been written about at length, but others are still being discovered. A decade ago, I began investigating civil cases in southern courts in which African Americans served as litigants.  I found far more cases than I expected – 1,377 civil cases with Black litigants across eight state supreme courts between 1865 and 1950. I focused on the almost one thousand cases in which Black southerners litigated civil suits against whites. While all the cases I examined eventually reached their state’s highest court, I paid particular attention to the archival case files of the lower court trials, as well as the cases’ appeals. My research analyzed civil cases with black litigants in the state supreme courts of Alabama, Arkansas, Georgia, Kentucky, Mississippi, North Carolina, Tennessee, Virginia between 1865 and 1950.

These cases tell a hitherto largely unexplored story of a venue that Black litigants found they could participate in, and gain success in, even at a time when they were shut out of other government institutions and experiencing widespread segregation. It was a site in which ordinary Black and white southerners – rather than just elites – could participate. Black women could also use this method, as well as Black men, serving as one of the litigants in 41 percent of the appellate civil suits between white and black litigants I found across eight states.

So why could some Black southerners still participate in civil cases in southern courts, when Black men had been denied the vote in these states, and African Americans found widespread injustice in the criminal justice system. For one, as I explain in my new book Litigating Across the Color Line , white southerners saw African Americans’ civil cases against whites as far less threatening than the vote. To litigate a civil case against a white person or white-governed city, a black litigant generally had to use white lawyers and their case would usually be decided on by all-white, or almost-all white juries and white judges. With these white gate-keepers keeping watch over the courts, many white southerners felt that the whites involved could be trusted to make the “right” decisions. 2 These civil cases also often did not seem dangerous to white southerners because the cases that black litigants were able to litigate in their state’s highest courts were generally brought by individuals only to gain something for their own families. Rebecca Sallee, for one, sought only damages for her own injury and lost wages. Civil cases that sought rights for larger groups of people of color came before these courts far less often. The structure of the court system itself – including the long terms of judges  and its reliance on precedent – also allowed a certain – although certainly not complete – level of insulation from political changes. 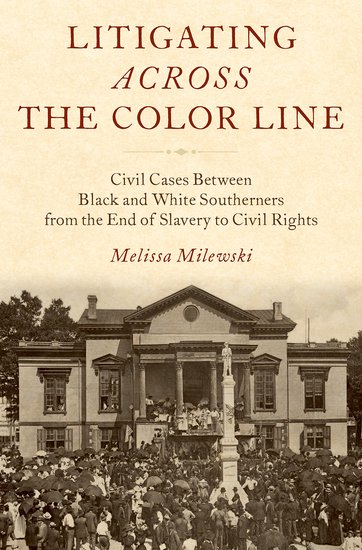 A key part of why these cases continued to occur, though, was also the pragmatic approach that many African Americans took to these cases. Often these cases were over economic outcomes that would have an enormous impact on African Americans’ financial futures and the lives of their families. Owning or losing their own land, having money to recover after an injury, or receiving a year’s wages could all hinge on the outcome of a civil case. As a result, African Americans generally drew on all the resources at their disposal to shape their suits.

At times, Black litigants were able to draw on legal knowledge gained from coaching from their lawyers, past experiences in the courtroom, or life in a law-saturated society. They then shaped their testimony to meet the demands of the law for their particular case. In personal injury suits like Sallee’s, Black litigants’ testimony often worked to establish proof of physical injury and loss of income, two important elements to win such a claim. 3 Sallee repeatedly emphasized her injury in her testimony, telling the court, “I can’t work with my hands good, and my back hurts me and is weak.” She worked to demonstrate her loss of income as she testified as well, stating that after her accident, “I had to give up…all my work except Mrs Thompson’s, from the 7th of October until some time in January…couldn’t wash – it hurt my back, and hurts it yet.” 4

Even when Black litigants did not know what the law necessitated, after a lifetime of negotiating the racial mores of the South, they often understood what whites wanted to hear and how to align them to their side. Thus, in the decades immediately after the Civil War, they sometimes presented themselves as having been loyal to their former masters. Frequently, they aligned their cases with local whites, having them testify in their favor or claiming property left them in a will by a white elite. The strategies that proved successful also shifted over time, as the society and politics around them changed, and at times necessitated difficult compromises. During the first two decades of the 20th century, Black litigants often presented themselves as more ignorant, more uneducated, and more vulnerable and trusting of whites than they actually were. While this strategy often allowed their cases to be heard, it reinforced ideas about racial inequality.

In large part because of African American litigants and their lawyers’ words and actions, in contrast to criminal cases, in which whites often had a great deal to gain from convicting African Americans, whites’ interests in civil cases between Black and white litigants were often mixed. While the individual white litigants that Black southerners litigated against stood to lose something in these civil cases, at times white southerners as a whole stood to gain from deciding in Black litigants’ favor. In Rebecca Sallee’s case, a decision in her favor could prevent the city from leaving open holes on city streets. A decision for an African American litigant could also shore up white southerners’ right to leave a bequest to who they pleased or reinforce white southerners’ property rights. Other decisions for Black litigants highlighted Black inequality or helped paper over the injustice in the southern labor system.

In some ways, then, these civil cases were tremendously limited. Only some African Americans were able to access the courts, and when they were able to do so, it was often only through using white lawyers, appealing to whites’ interests and, at times, presenting themselves in ways that upheld white supremacy itself. However, in other ways, these cases were tremendously bold and significant. In the cases that took place between white and Black litigants, ordinary Black southerners took on their white neighbors, former masters, employers, landowners, and city officials in southern courts. As they appealed to whites’ interests in these cases, they often also asserted their own economic and legal rights. Even cases in which Black litigants emphasized their own lack of knowledge or illiteracy in their testimony often noted their rights in other parts of the testimony. Moreover, in these cases, Black litigants showed an ability to negotiate and to gain decisions in their favor in a white-dominated institution at a time of tremendous discrimination. Indeed, Black litigants won 59 percent of the appellate civil cases against whites examined from the end of the Civil War through the mid-twentieth century across all eight states. 5 Sallee, for one, won damages from the local court and, on appeal, from the highest court of Kentucky. 6 In their wake, successful Black litigants left behind knowledge of how to negotiate within a legal system in which the actors making decisions often had very different interests than their own.

Like generations before and after them, these civil litigants had assessed the situation at hand and found a venue and method to assert their economic and legal rights. Responding to a tremendously constrained environment in which they were increasingly shut out of other government institutions, seen as racially inferior, and often segregated, these Black litigants had found a way to fight for their rights in one of the only ways they could.

Melissa Milewski is a lecturer in History and American Studies at the University of Sussex in England. Her work examines race and the law in U.S. History. Her book, Litigating Across the Color Line: Civil Cases Between Black and White Southerners from the End of Slavery to Civil Rights, was published by Oxford University Press in November 2017. Follow her on Twitter @MilewskiMelissa.