This post is part of my blog series that announces the release of new films in African American History and African Diaspora Studies. Today, I am featuring “Black enuf*” which is currently screening at locations across the country. 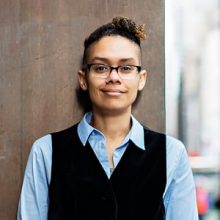 Black enuf* was written, directed and animated by Carrie Hawks, an artist who harnesses the magic of animation to tell stories. Hawks has been seriously committed to visual art ever since holding a crayon. After traveling and working for a few years, Hawks went back to school at Georgia State University, majoring in Graphic Design. Hawks’ talents have been utilized by Al Jazeera America, Wired, Cartoon Network, the ACLU, and Publicis Modem. Hawks has exhibited art in New York, Atlanta, Kansas City, Toronto, and Tokyo. Hawks’ first film, Delilah, won the Best Experimental Award at the Reel Sisters of the Diaspora Film Festival (2012). Hawks’ films have screened at BlackStar Film Festival (Philadelphia), CinemAfrica (Stockholm, Sweden), and MIX Queer Experimental Film Festival (New York). Black enuf* won the “Best Animation Award” at the 2017 Reel Sisters of the Diaspora Film Festival. The Jerome Foundation gave generous funding to Black enuf*. Follow Hawks on Twitter @maroonhorizon. 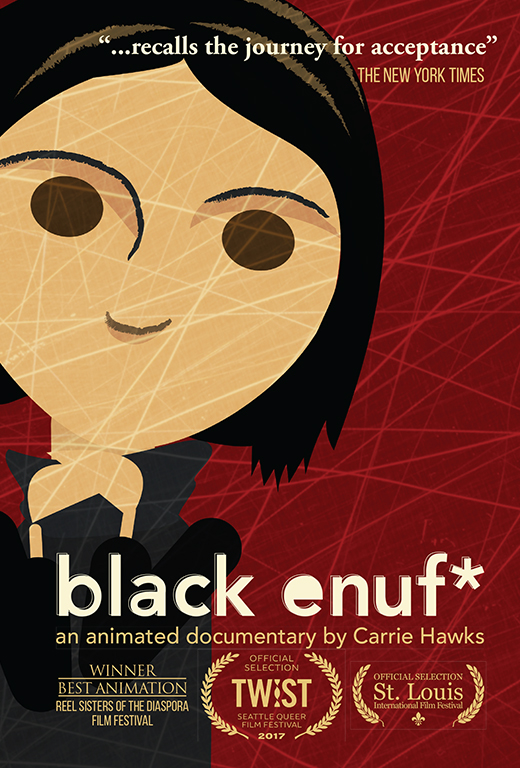 Synopsis from Director, Writer, and Animator, Carrie Hawks: A queer oddball seeks approval from black peers despite a serious lack of hip-hop credentials and a family that ‘talks white.’ My quest for a Black Card (undeniable acceptance of my racial identity) takes me from Missouri, to New York, and halfway around the world. My animated documentary, black enuf*, examines the expanding black identity through a personal journey. The film interweaves stories from my great-grandmother’s autobiography, interviews of family & friends, and my hand-drawn memories. Tongue-and-cheek humor makes such a heavy topic easier to digest. The visuals mix Monty Python style cut outs, infographics, watercolor, and a variety of illustrative styles. We’re all on a quest for acceptance.

Carrie Hawks brought their vibrant animated mini-doc, Black Enuf to BlackStar. It explores their identity and the long, winding journey it took to arrive at a comfortable place with it. Their tongue-in-cheek humor and honesty made this film resonate.-Black Girl Nerds

Michael T. Barry Jr.: How do the devices of humor and animation make your film and its message, as you say, “easier to digest”? How does your film specifically utilize these devices?

Carrie Hawks: When you tell a joke, you get away with saying some outlandish notions that wouldn’t fly in a serious conversation. When I think of comedians like Dick Gregory or Wanda Sykes, they vocalize strong opinions that make you laugh. At the same time, you recognize the truth in what they’re saying. It’s similar with certain types of animation. Extreme violence or nudity in a cartoon does not deter the viewer like it would in a live-action documentary. I watched an animated piece on labia surgery that would have made me cringe if it were photographs. Once animated, I concentrated more on the idea of what they were discussing rather photo realistic details. In my film, I have a scene depicting self-harm/self-mutilation. Animating the scene makes the imagery less upsetting, and the blood less grotesque. I feel like it concentrates on the idea of pain that I’m feeling rather than the actual scars on my neck. I use humor all throughout the film, joking about failed therapy or my grandfather’s homophobia, which adds a jovial element to a sad time. It’s also a coping mechanism to combat depression.