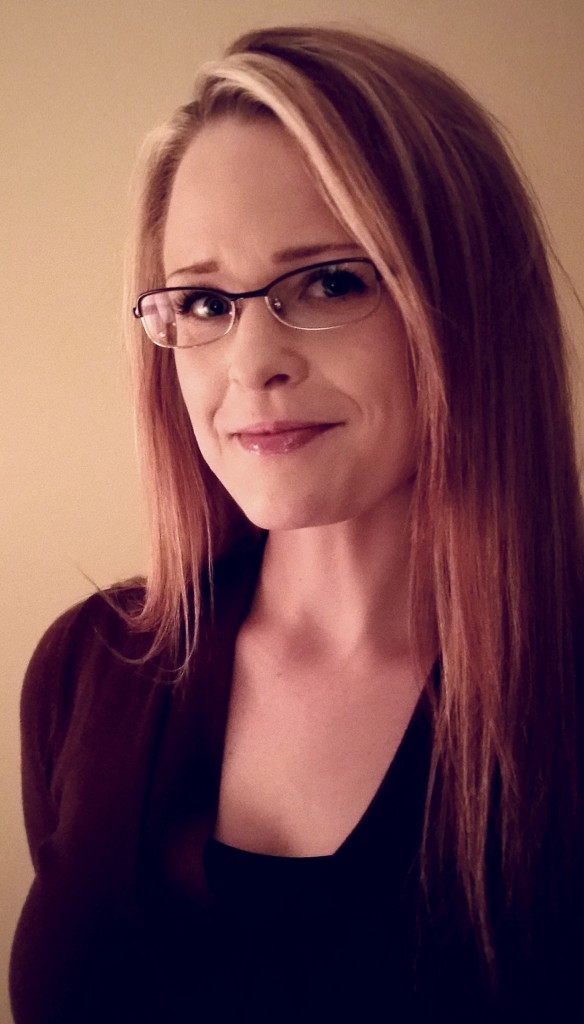 This is a guest post by Keri Leigh Merritt, a historian of the 19th c. American South. She received her Ph.D. from the University of Georgia in 2014 and works as an independent scholar in Atlanta. Her first book, Masterless Men: Poor Whites, Slavery, and Capitalism in the Deep South, is currently under review with Cambridge University press. Keri Leigh is also co-editing a collection of essays on southern labor history and has begun work on her second monograph, 1865: The Year of the First Black Power Movement. She regularly presents work at academic conferences, and has several speaking engagements planned for the upcoming year. Follow Keri Leigh on Twitter: @kerileighmerrit

Immediately following the news of emancipation, joyous freedmen and women gathered in every southern city and town in a near-ecstatic state of celebration. For generations they had prayed, hoped, and fought to escape slavery. Yet after a few short, jubilant years filled with the reuniting of families, the construction of new churches and schools, and the endowment of basic citizenship and suffrage rights, blacks found themselves at the bottom of free society, just one step removed from bondage. Indeed, in no more than a decade after emancipation, many African Americans were questioning the severe limitations that the nation’s whites were continually placing upon their “freedom.” As W.E.B. DuBois famously wrote, “The slave went free; stood a brief moment in the sun; then moved back again toward slavery.”[1]

When judged comparatively with other nations’ emancipatory histories, America’s experience is unique. While African Americans were the only freed slaves to be granted political rights so soon after emancipation, those rights were limited for a people without land, capital, or job prospects. Even the mantle of citizenship was inconsequential for a people whose economic choices were limited to signing predatory labor contracts or remaining jobless – all while their families were suffering from hunger and want.

Perhaps one of the most lasting myths about Reconstruction is that the “forty acres and a mule” proposal was simply too radical to ever succeed. A comprehensive policy of post-war land reform would have served as the primary source for reparations among newly freedmen. Yet when the failure of land distribution among blacks is judged in the context of the simultaneously-implemented Homestead Acts, the reality of the situation is laid bare. While freedmen waited in vain for any type of recompense – for generations of brutality and violence and toil – millions of whites were given free land by the federal government. The problem was not the radical nature of land reform. The problem was race.

Southern slaveholders had successfully prevented the passage of the Homestead Act during the late antebellum period. Fearing a nation of small farmers who would ostensibly become anti-slavery proponents, the master class had used their weighty political power to table any discussion of agrarian reform prior to the Civil War. Yet soon after secession, the push for the Homestead Act was renewed. The original Act granted about 1.5 billion acres of western land – an area close to the land mass of both California and Texas – to individual Americans, virtually for free. As Trina Williams Shanks explained,

The new law established a three-fold homestead acquisition process: filing an application, improving the land, and filing for deed of title. Any U.S. citizen, or intended citizen, who had never borne arms against the U.S. Government could file an application and lay claim to 160 acres of surveyed Government land. For the next 5 years, the homesteader had to live on the land and improve it by building a 12-by-14 dwelling and growing crops. After 5 years, the homesteader could file for his patent…

Since the Homestead Act was signed into law by Lincoln in May 1862, few people from the South initially received any benefit from it. Yet given that it remained in place until 1934, well over a million and a half white families – both American-born and immigrant – profited from it. Even though the process was rife with fraud, as many homesteaders sold their plots to corporations, the original grantees were able to pocket the income from land sales, establishing a basis of wealth and capital. By the end of the Act, more than 270 million acres of land had been transferred to individuals, almost all of whom were white. Nearly 10 percent of all the land in the entire United States was granted to homesteaders for little more than a filing fee.[2] 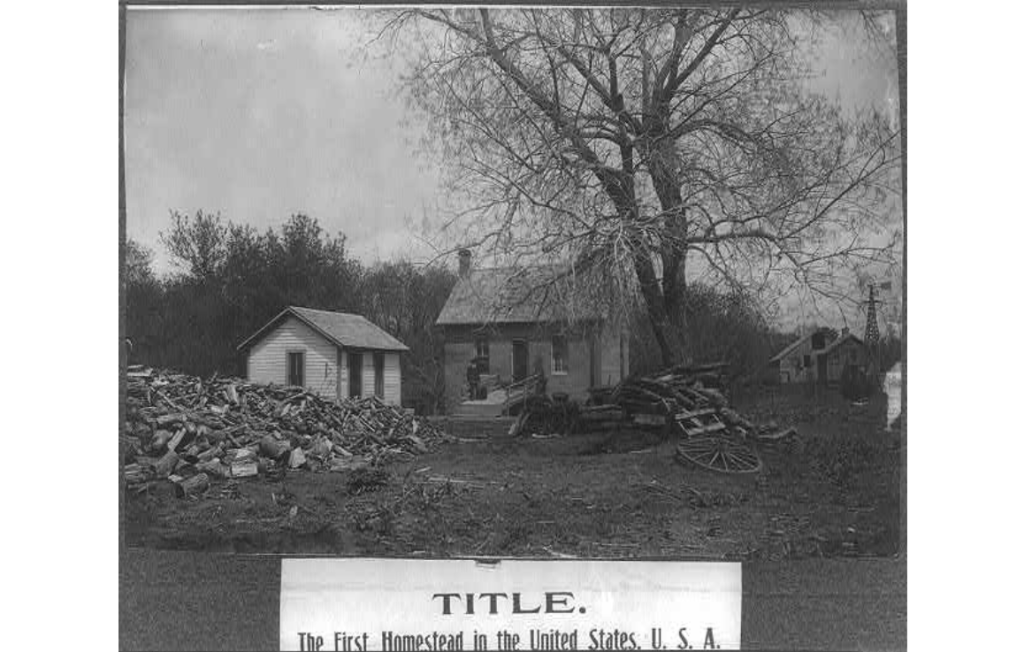 Just one year after Appomattox, the Southern Homestead Act sought to accomplish the same objectives as the original act, yet on a much smaller scale. Opening up 46 million acres of public domain land in Alabama, Arkansas, Florida, Louisiana, and Mississippi, the guidelines to claiming land were similar to the original Homestead Act. During the first year of the Act, unoccupied southern land was exclusively offered to African Americans and loyal whites, but after 1867 even landless former Confederates could apply. Although the law ostensibly offered an agrarian solution to several pressing Reconstruction era issues, in reality, a large percentage of the land offered was un-farmable. Much of the Southern Homestead land was either heavily wooded, covered with swamps, or lay very far from transportation routes.[3]

Still, the ownership of capital would have been the only realistic way for blacks to achieve a level of self-sufficiency after generations of slavery. Perhaps the most important reason agrarian reform failed concerned the year-long labor contracts freedmen had been cajoled or forced into signing. Leaving a job before the contractual end date frequently resulted in virtual re-enslavement on a chain gang. Although many of these jobs had been arranged under the Freedman’s Bureau, blacks were locked into these contracts until the very date – January 1, 1867 – that they stopped receiving special homesteading benefits. Furthermore, it was hard to administratively arrange homesteading, especially for people who owned no cash, and had no experience in dealing with bureaucracy. Most southern states had only one land office, meaning the administrative duties cost far more than the filing fees for the actual land. Depending on where the office was located, it could take several weeks to simply make the trip.[4]

Homesteading activity also varied greatly by state, and was sporadic from year to year. Perhaps due to its haphazard administration, the Southern Homestead Act was repealed by Congress in 1876. Only between 4,000 and 5,500 of the 27,800 final SHA patents were ever awarded to African Americans. The precise role racism played in this failure of this policy’s intended claims may never be known. What is known, however, is that very few homesteads were granted to black claimants. Simultaneously, hundreds of thousands of whites – American-born and immigrant – succeeded in becoming landowners, and many others would follow in their footsteps over the next few decades.[5] 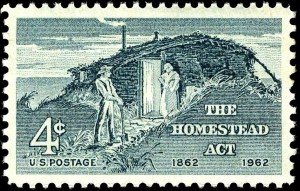 Thus, by essentially giving away land to white individuals and white-owned businesses, the Homestead Acts were the most extensive, radical, redistributive governmental policy in American history. The number of original (1862) Homestead-recipient descendants living in the year 2000 was estimated to be around forty-six million people, about a quarter of the U.S. adult population. As sociologist Thomas Shapiro pointed out, if so many white Americans can potentially trace their “legacy of property ownership” to these entitlement programs, modern-day issues like “upward mobility, economic stability, class status, and wealth” need to be understood as directly related “to one national policy—a policy that in practice essentially excluded African Americans.”[6]

With the advent of emancipation, therefore, blacks became the only race in America ever to start out – as an entire people – with close to zero wealth. And with no saved, inheritable wealth and assets, loans were nearly impossible to secure. Homelessness and hardship were only one illness, one accident, or one bad crop away. Having nothing else upon which to build or generate wealth, the majority of freedmen had little real chance of breaking the cycles of poverty created by slavery, and perpetuated by federal policy. The stain of slavery, it seems, is much more widespread and lasting than many scholars have admitted. Yet it is the legacy of Reconstruction – particularly the failure of land redistribution – that so closely coupled poverty and race in America. The conversation over the United States’ extreme (and growing) inequality is long overdue, and it is morally imperative that race is a central part of that dialogue.

Comments on “Race, Reconstruction, and Reparations”