By Dan Berger January 29, 2020 Comments Off on The Imperial History of US Policing: An Interview with Stuart Schrader 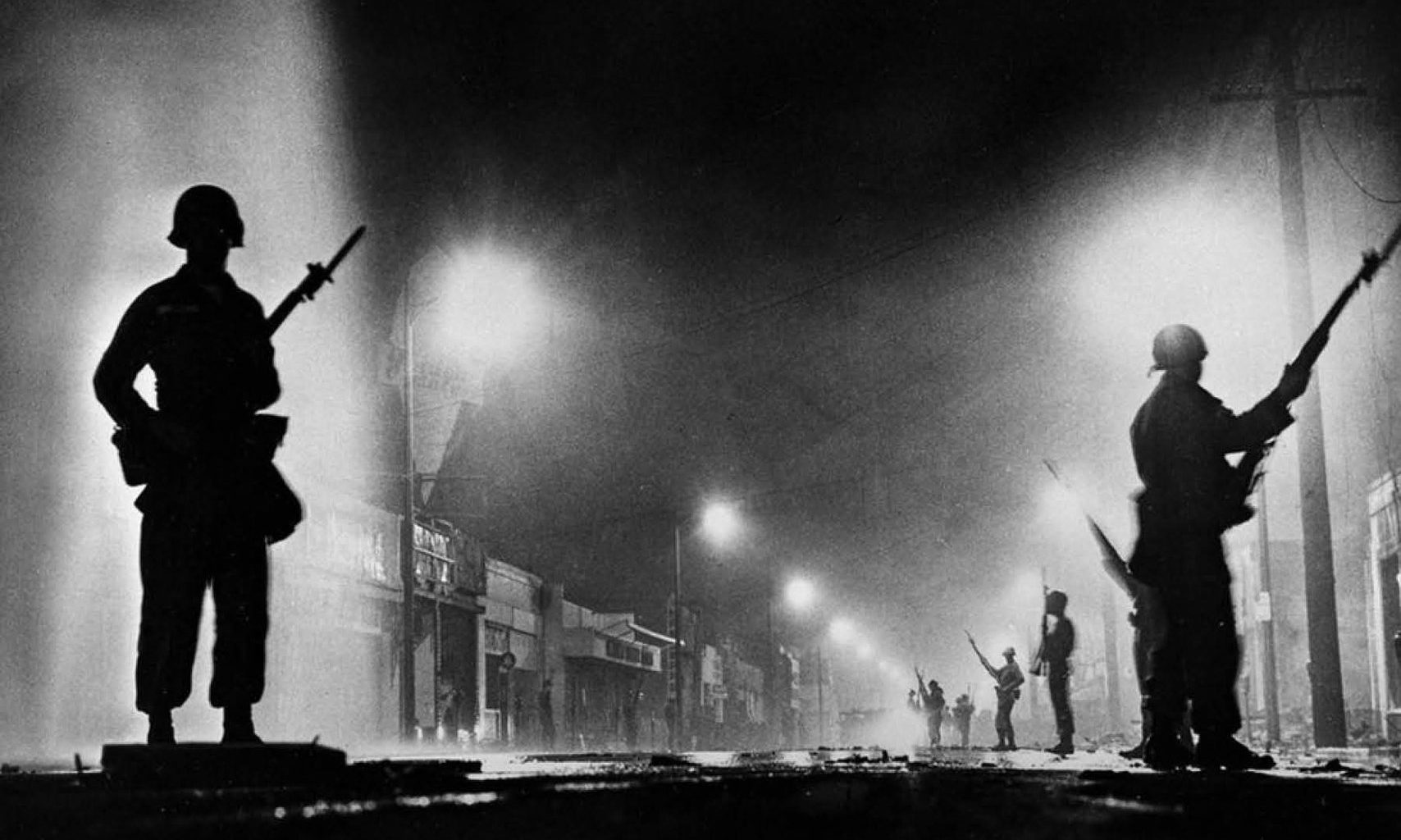 In today’s interview, Dan Berger speaks with Stuart Schrader about his new book, Badges Without Borders: How Global Counterinsurgency Transformed American Policing (2019). Dr. Schrader is Associate Director of the Program in Racism, Immigration, and Citizenship at Johns Hopkins University, where he is a Lecturer teaching courses in Africana Studies, International Studies, Political Science, and Sociology. A scholar of race, policing, and counterinsurgency, Dr. Schrader received his PhD in American Studies from NYU and has published articles in American Quarterly, The Baffler, Boston Review, Jacobin, Public Books, and elsewhere. Follow Dr. Schrader on Twitter @stschrader1.

Dan Berger: Badges Without Borders argues that the expansion and militarization of US policing developed not simply in response to the “urban crisis” but as a branch of US imperialism worldwide. How does this transnational focus help us understand the rise of mass incarceration differently than the way scholars and activists have told the story thus far?

Stuart Schrader: My framework complements the existing scholarship on the carceral state’s political development and policy history. I focus on the actors who implemented criminal-justice policy, rather than only the lawmakers who created the policy or the voters who support the lawmakers. Both are important, of course, but looking at the law-enforcement experts and leaders indicates that they composed an institutionally robust and long-lasting constituency. They have consistently advocated on their own behalf. Policing experts backed a “war on crime” and supported this martial vocabulary before lawmakers or voters did because police stood to benefit from it.

Historians of the carceral state have debated whether conservatives or liberals should bear responsibility. In fact, both do. The experts I investigate convinced both conservatives and liberals to build a powerful policing apparatus using the justifications that also convinced both to spend endlessly on the national security state: rampant threat inflation. This was no coincidence. The people I examine traversed — and bridged — the national security state and the carceral state. And they carried their finely crafted apocalyptic warnings with them across the globe. Conflating communism and crime paid dividends.

Finally, the history of the carceral state, as Angela Y. Davis and others have shown, is the history of reformism. Reformers were the most powerful figures in US law enforcement in the mid-20th century. Reformers cared above all about legitimacy because without legitimacy, they believed, the state could not achieve policy-making goals, let alone assure order (a belief that persists today). Overseas experience taught police reformers how to try to enhance legitimacy through reform in states strapped with low existing levels of state capacity and little popular approval. This lesson seemed important for poorly resourced cities with rebellious Black populations at home. Reformers took to heart an emphasis on technologies to avoid worsening rebellion that also strengthened capabilities of social control.

Berger: You write that “in relation to policing, race is understood as a cause, when it should be understood as an effect.” The phrasing calls to mind W.E.B. Du Bois’s assertion that a “black man is a person who must ride Jim Crow in Georgia.” What forms of race did police power assert? How does understanding race as an effect rather than a cause reorient our understanding of police?

Schrader: This line from Du Bois is often on my mind. Du Bois evokes the exasperation that comes from trying to scientifically delineate racial identity as if it were stable and coherent. Instead, he argues, what makes race cohere is not biology but the institutionalized operations of racism.

Generally, I am trying to navigate what I see as two mutually supportive though opposed approaches to race prevalent today: the Scylla of neo-essentialist accounts of race and the Charybdis of race-exclusionary accounts of class. The transportation of US policing practices to other countries troubles both. The latter takes the basic form of the question, “how can racism be essential to capitalism if country X doesn’t have a subjugated racial minority?” The former takes the form of the refusal of comparativism, adopting Eugene Genovese’s phrase “phenomenon without analogue” to describe the “black experience in this country.” (He coined the term in his neoconservative years, while writing about crack and street crime.) Neither approach can deal with the practical flexibility of racial idioms, which give the lie to the fixity biological explanations seek, nor does either offer any tools for thinking through colonialist and imperialist formations of power and difference that exceed the container of the nation-state.

The people who helmed US empire after World War II hoped US history was an experience without analog. Thus, it could become a new model for modernization. But they also (rightly) worried that by acting as an empire the United States creating all sorts of nasty analogies. Divesting policing of its traditional racial vocabulary was crucial, but difficult. The centrality of policing to this form of global racial liberalism, and of racial liberalism to global policing, offers insights into this dominant ideology: avoiding racist language and justifications would insulate coercive practices, allowing them to remain essentially unchanged at home and abroad.

I was surprised to learn how prescient police leaders like William H. Parker actually were in outlining how something like “racial profiling” would become illegitimate. Du Bois’s phrase suggests that racial profiling makes race, rather than responding to it. Police experts took up part of this critique. Parker was willing, for instance, to argue that racial groups are not inherently better or worse than each other, only that markers of group identity are useful signals for police decision-making. Police were not responding to racial deficiency but acting prospectively to solve or deter crime. (The Supreme Court would concur.) But police experts clearly have not taken the critical next step of saying that the decisions police make, therefore, compose the substance of racial ascription itself by creating group-differentiated vulnerability to premature death, in Ruth Wilson Gilmore’s phrase, meaning the possibility of reproduced racial hierarchy. Critiques that fixate on equalizing police practices across groups, or recalibrating the racial composition of police forces, risk falling into this trap.

Schrader: Black freedom movements alarmed counterinsurgency experts for a few reasons. First, Black radicals explicitly invoked guerrilla warfare. Invocations occurred more frequently than actual operations, however. In some new work, I’m examining how the very concept of “urban guerrilla warfare” was a co-production of both Black radicals and security experts, who were reading and responding to each other. Second, Black radicals built networks across borders. Left-wing leaders like Mao Zedong and revolutionary groups like South Vietnam’s National Liberation Front paid attention to the Black freedom struggle and declared solidarity with it, much as groups like the Black Panther Party pledged support for these and other national liberation movements. These connections terrified counterinsurgency experts. Their great fear was that Cuba, China, and the Soviet Union would share resources with Black freedom organizations. Third, Black and other anti-imperialists resisted police repression, including by revealing how it worked and sharing their testimony internationally. An anti-imperialist counter-public sphere emerged in part as a response to the international spread of techniques of repression that the book examines.

Altogether, counterinsurgency experts responded in at least three notable ways. First, they analogized Harlem and Saigon, for example, developing counterinsurgency training and techniques applicable to both. Second, many counterinsurgency experts tried to walk a fine line of invoking the specter of a global movement of left-wing radicalism, anti-imperialism, and anti-racism while avoiding explicitly racist language in the process, as I suggested. By acceding to the demand to lessen the appearance of bigotry, they fostered ideological commonalities across borders, summoning and even confirming the existence of an anti-racist international. Finally, counterinsurgency experts simply relied on familiar forms of US policing, which had long been honed in social control of African American people and movements. As much as they may have wished they could create a universal police science to diffuse across the globe to contain communism, they were universalizing a set of policing practices whose genealogy was slavery, settler genocide of native peoples, labor repression, and Jim Crow.

Berger: How does counterinsurgency help us understand the problem with something like “community policing” today?