In today’s post, Jermaine Scott, a PhD candidate in the Department of African American Studies at Northwestern University, interviews Howard Bryant about his new book, The Heritage: Black Athletes, a Divided America, and the Politics of Patriotism (Beacon Press, 2018). Bryant is a senior writer for ESPN.com and ESPN The Magazine and appears regularly on ESPN programming, including SportsCenter and Outside the Lines, as well as a guest on several ESPN radio affiliates from KNBR in San Francisco to TSN 105 in Toronto. He has been the sports correspondent for National Public Radio’s Weekend Edition Saturday since 2006. A two-time winner of the Casey Award for Best Baseball Book of the Year from Spitball magazine, he is the author of The Last Hero: A Life of Henry Aaron (Knopf), Juicing the Game: Drugs, Power the Fight for the Soul of Major League Baseball (Viking), Shut Out: A Story of Race and Baseball in Boston (Routledge/Beacon), Legends: the Best Players, Games, and Teams in Football (Penguin)  for middle-grade readers, and the picture book Sisters and Champions: The True Story of Venus and Serena Williams (Philomel/Penguin) for younger readers. He was the guest editor of the 2017 edition of The Best American Sports Writing and is the author most recently of The Heritage: Black Athletes, a Divided America, and the Politics of Patriotism (Beacon). Follow him on Twitter @hbryant42. *This interview has been condensed and edited for greater clarity.

Jermaine Scott: During the last couple of years Black athletes have taken center stage in the fight for racial justice. What motivated you to write this book?

Howard Bryant: I would emphasize two key events: the murder of Trayvon Martin and the Ferguson protests following the police shooting of Michael Brown. I remember seeing some of the players of the Miami Heat, such as LeBron James and Dwayne Wade, wearing the hoodie after Trayvon Martin was killed. I thought that was interesting, but I wasn’t sure just how impactful it was.

And then after the Ferguson protests, I observed several players getting involved in the protest in 2014. That year was especially important. The Donald Sterling audio recording in which he spoke disparagingly about Black players, combined with the Ferguson protests and then the killings of Eric Garner and Tamir Rice, all shook the nation and many athletes who had not previously been very vocal about social issues started to respond. I started to draw connections between an athlete like LeBron James to someone like Muhammad Ali in the 1970s. These stories challenged the popular narrative that sports were supposed to be the place where you got away from your problems. The notion that athletes should “stick to sports” and “shut up and play” made no sense when you look carefully at the history of sports in the United States. For the Black athlete, sports have always been political. So this new book emphasizes this point—what I call “the heritage”—to remind people that sports and protests have always been deeply connected. In terms of the heritage of Black athletic political participation, this goes back a hundred years. This was the impetus for writing the book—to highlight this important heritage. And the heritage is really this heritage of responsibility, that you were willing to risk something for your people.

Scott: Tell us more about the ebbs and flows of “the heritage.”

Bryant: I think we begin to see a shift in sports and protests in the late 1970s. And here I am thinking about the generation of players such as O. J. Simpson. In many ways, this was the first generation of players who were actually making real money. In 1972, for example, Hank Aaron signed the biggest deal in baseball. He signed a three-year, $600,000 contract. He was making $200,000 a year. And today LeBron James makes $35.6 million. So, when you put it that way, all of a sudden, these players had something to protect.

And also I think the country was weary. I think when you’re looking at whether it’s Vietnam, Watergate, civil rights, all of the above, I think when you start getting into the mid-70s people were tired and they assumed that because Jim Crow had been destroyed the problems were over. And I think there’s one other thing, too, that hurt the heritage as well, and that was anybody with two eyes saw what happened to those players that did stick their neck out. They were punished. We love to talk about Jackie Robinson and we put Jackie Robinson on a stand and we name highways after him and schools after him and everyone wears the number 42 one day a year, but what they never talk about was that Major League Baseball couldn’t wait to get rid of Jackie Robinson. They never brought him back. He was never part of the family. The minute he retired, that was it. And we talk about the great Curt Flood and him standing up to the reserve clause, and he is the reason why these players make so much money today, but Major League Baseball ruined him, and he had to pay a price. And everybody talks about John Carlos and Tommie Smith, having the Black fist and doing what they did in ‘68, but they also got destroyed. So, when you start talking about the price of the real heritage, you were talking about risking your entire livelihood, and how much of a dent did you really make? Who really stood by you, who really came to your defense? So, I think that the players also recognized that, ‘hey, I’m getting mine now, I’m making money, I can move to white neighborhoods, my kids get to go to private school, and maybe the smarter move is to keep my head down and take care of myself’. 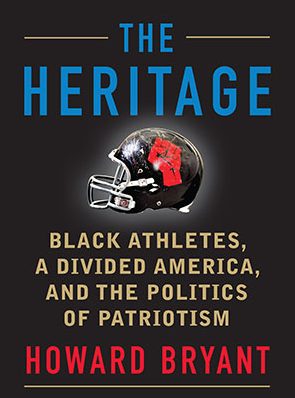 Scott: What has been the role of Black women in the heritage?

Bryant: The female element of the heritage is much more complicated. This is partly because we talk about the heritage in the framework of team sports and solidarity, but we have pretty much undermined women’s ability to be a part of team sports, up until the last twenty-five years, with  the introduction of the American Baseball League (ABL) and later, the Women’s National Basketball Association (WNBA). As a result, there were not many team sport opportunities for women. This has exposed women in a way that it didn’t necessarily expose the men. If you were a female athlete in the Olympics, for example, or if you were Jackie Joyner-Kersee or Florence Griffith Joyner, then you relied almost exclusively on the support of sponsors. So if women athletes resisted the status quo, the sponsors would go after their money, killing their career and financial stability. They didn’t have the protection of a $30 million contract that LeBron James has today. Therefore, the women are in a much more difficult position than a lot of the men have been. And that said, even in the WNBA, the women make a fraction of what the men make and were still willing to take a risk.

Scott: How should we understand the role of contemporary Black athletes in the lineage of the heritage?

Bryant: When you look at today’s athletes, their role is one of the “peacemaker.” Every time you listen to an athlete today, they say, ‘we just all need to come together’. Their message is to be the peacemaker. Colin Kaepernick is not a peacemaker. Colin Kaepernick has been very clear that ‘I am indicting you, American justice system, and you, American police force, for doing what you’ve done. You need to pay for what you’ve done’! That’s a very different message from the peacemaker. As impressive as LeBron James has been, he was curiously absent during the whole Tamir Rice case, in his town. But they are in a difficult position. To be sure, LeBron is the anti-Jordan on this topic. Previously, the image of the “leading man” was to be like Mike, be corporate, look respectable, and look the part. But to look the part was to completely abandon your politics, of advocating for your people. That was part of the deal. It was not politically advantageous to advocate for people who looked like you. When I think about the heritage, I think about risk. I look at all these superstar athletes today and I ask myself, ‘are you part of this lineage when you got Nike on your side’? You can wear a Black Lives Matter t-shirt, but you’re not going up against your corporate sponsor.

Scott: Do you envision a time when the heritage is no longer needed, which is to say do you think we’ll reach a point where racial inequality is eradicated from this country?

Bryant: No, but I think the heritage will be less when the Black brain surpasses the Black body and let’s face it, that hasn’t happened. And so, as long as you’re constantly looking to LeBron James and Serena Williams and whoever else you want to look at out there, Randy Moss or Todd Gurley or whatever other superstar athlete out there you want to add, then the Black athlete is always going to be that important. And when you don’t have the sort of emphasis that we need on success in different occupations, right now the Black culture is rooted in being in front of the camera. One of the things I do with my son whenever we go to the movies is we always make sure we watch all of the credits to the end. And part of the reason is respect for the movie making, but the other reason is to show him how many jobs are available in these industries without being Denzel Washington. Look at all the opportunities that are there for you, you don’t only have to be the star. That’s that magic bullet thinking that we sell to the ones who made it, and that’s why I’m so disgusted by the number of times we see these stories, you know if it wasn’t for basketball I’d be dead or in jail or if it wasn’t for football I’d be dead or in jail, and I’m like at this late stage in the game, if dead or in jail is the best we can do without a jump shot, then integration has been a colossal failure.

Jermaine Scott is Assistant Professor of history at Mississippi State University and is currently the Carter G. Woodson Distinguished Postdoctoral Fellow and the University of Virginia. His research interests include the cultural politics of sport, Black politics, Black diaspora studies, and modernity/coloniality theory. His dissertation sought to understand the ways in which Black athletic collectives in the African Diaspora negotiate the colonial and racial constitution of modern sports, and football/soccer in particular. His writings have been included in ESPN’s The Undefeated and the Journal of Sports History, and he is an active member of the American Studies Association’s Sports Studies Caucus. Follow him on Twitter @itsjermaine.

Comments on “On Race and Sports: An Interview with Howard Bryant”