loading...
By Ralph Callebert May 16, 2019 Comments Off on ‘Dockworker Power’: Transnational Struggles for Justice

Dockworkers are a favorite subject for many labor historians—including myself. Historically, they have proven themselves reliably radical and strike-prone, and together with other maritime workers they helped spread strikes, unrest, and revolutionary ideals from port to port. Longshore workers represent a workforce at the forefront of a fabled labor internationalism. There is thus an extensive literature on dockworkers and their activism. Peter Cole’s Dockworker Power: Race and Activism in Durban and the San Francisco Bay Area fits in this tradition.

In Dockworker Power, Cole compares dockers’ activism, organization, and working conditions in two important global ports from the 1940s to today; these ports are the San Francisco Bay Area and Durban, South Africa. In doing so, he addresses a number of important gaps in the literature on dock labor: it is one of the first major studies to compare a port in the Global North to one in the Global South, if not the first, and there is a dearth of research on how containerization transformed work and organization on the docks (5). The impact of containerization, a dramatic technological change that transformed dock labor and global shipping, is one of the main themes of this book. Another key theme is how dockworkers in Durban and the Bay Area “fought for racial equality in their home countries as well as abroad” (2).

Dockworker Power emphasizes the important efforts of dockworkers in the Bay Area, organized in the racially integrated Local 10 of the International Longshore and Warehouse Union (ILWU). It draws out their role in the civil rights movement and other domestic social movements. However, the American labor movement, Cole argues, frequently does not get the recognition it deserves in histories of these movements. In South Africa, on the other hand, the role of workers’ activism in the struggle against apartheid is well-documented. Nevertheless, Durban’s dockworkers specifically receive short shrift here (84-85). Another key point is that the impact of changes in technology and labor regimes depends on workers’ union power and legal status. The decasualization of labor in the Bay Area thus benefited workers represented by a strong union. Moreover, while automation and containerization weakened their union, Bay Area workers did manage to get a “share of the machine” (149) through better pay. In Durban these changes came entirely at the expense of workers, as the entirely Black workforce lacked legal rights to organize under apartheid (118-19).

The chapters are organized chronologically, and each has a section on Durban and one on the Bay Area. After a short introduction and a chapter that establishes some context for both ports, chapters two and three study the intersections of fighting for workers’ rights and fighting racial oppression, respectively in the 1940s-50s and in the 1960s-70s. Chapters four and five discuss the divergent impacts of decasualization and containerization in both ports. The last chapter looks at boycotts workers undertook to protest injustices abroad; this chapter in particular highlights the labor internationalism that Cole lauds. The book is overall well written and easy to read, though the author at times relies too much on direct quotations.

This book does many things well. Cole makes a strong case for the importance of studying ports and their workers in global history. His research is meticulous—not a minor feat when you compare two ports in very different contexts. He provides a detailed history of unions and workers’ organization, strikes, and the labor regime in both ports. Importantly, he emphasizes the intersection of race and class, a perspective that, particularly in the US, is often forgotten. He argues, following much of the comparative literature, that racial capitalism is what the US and apartheid South Africa have in common (10). In both countries, as elsewhere, race and class cannot fruitfully be studied in isolation from each other.

Much of the book’s originality stems from its North-South comparison. This comparative approach, of course, can be daunting for any author, as it requires extensive familiarity with two sites. When done right such works can give us new insights into both histories. Cole spells out what Americanists can learn from South Africa, namely the role of labor activism in social movements (9, 212). There is, however, no equivalent statement of what the American perspective contributes to South African studies. There are many things a South Africanist can take away but it seems somewhat odd that there is no similar explicit statement. This gives the impression that the intended audience is Americanists more than South Africanists, which is reasonable considering the book is published by an American publisher in a series called “The Working Class in American History.” 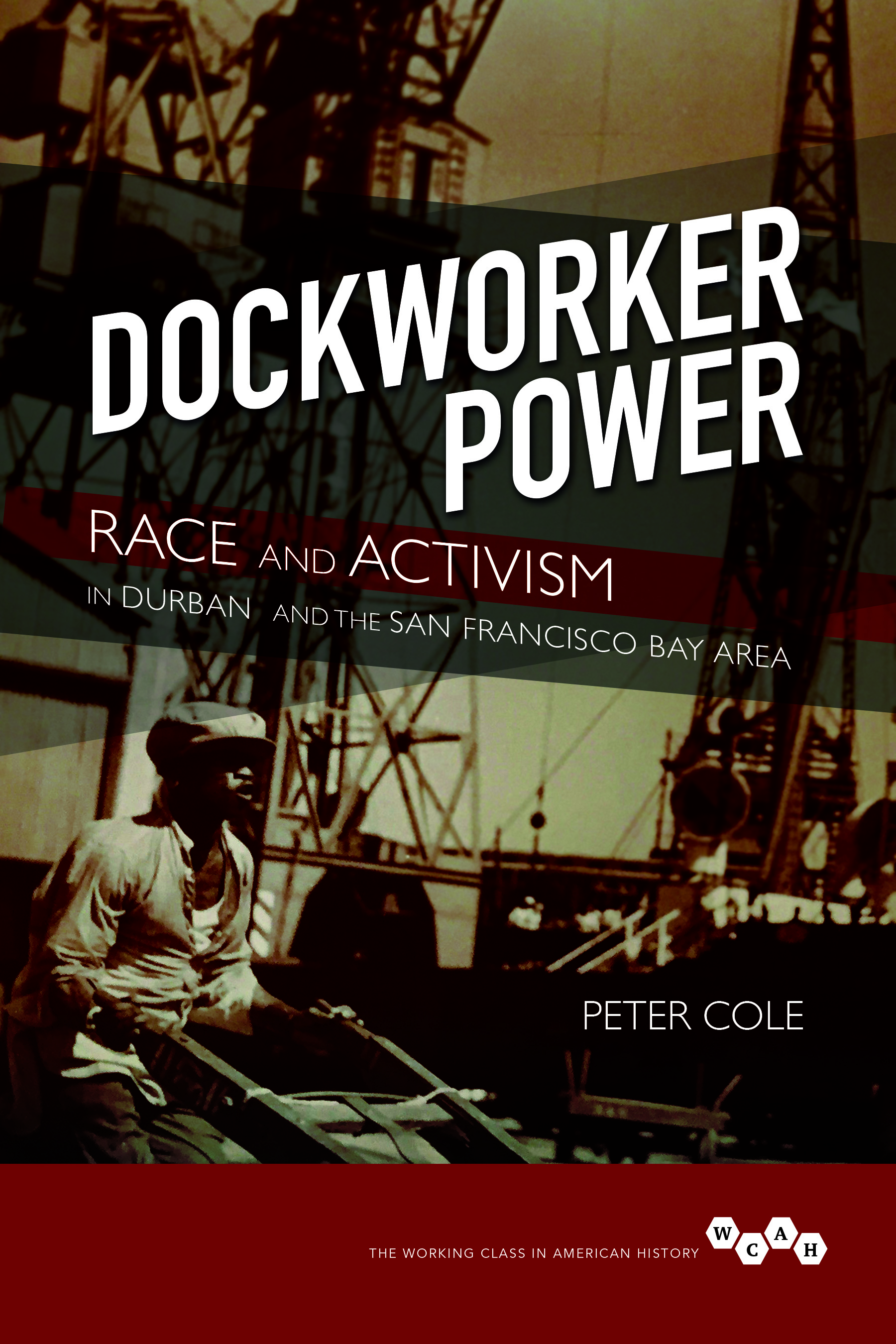 Knowing one’s audience is a good thing, but here it reflects the book’s main flaw: the American account is often richer and more detailed than the South African side of the story, and seemingly more convincing. The most important consequence of this imbalance is that Cole does not sufficiently acknowledge the distinctiveness of Durban’s Zulu workers and their identities. Beyond the political and legal setting of apartheid, there is little attention to the specific cultural and social context of Zulu workers and their lives on and off the docks.

That is not to say that Cole delves into a rich social and cultural history of San Francisco’s dockworkers without doing so for Durban’s workers. In fact, we do not learn much about the social lives of either group. In that sense, beyond the North-South comparison, Dockworker Power is a traditional labor history focusing on the workplace, organization, and activism. It is, however, because of this narrow focus that the significant social and cultural differences between these two contexts are lost. The result is that African workers become just another instance of a universal conception of wage laborers, based on Western experiences of proletarianization and industrialization. Such understandings of labor do not always travel well beyond the Global North. What I found in my own research on Durban’s dockworkers is that the consciousness of these workers does not neatly overlap with the universal working-class consciousness implicit in Dockworker Power.

By not engaging with the social and cultural context that makes the experiences of Durban’s dockworkers different, Cole can suggest the presence of a deep commitment to anti-racist struggles despite these workers’ well-documented and prominent role in Durban’s 1949 anti-Indian pogrom. He does bring up these riots (43-45) but does not let them complicate his unchecked notion of the unity of working-class activism and anti-racist struggles. Yet, many dock workers expressed strongly racist sentiments against Indians and subscribed to a petit bourgeois economic nationalism that pitted them against Indian shopkeepers and petty entrepreneurs. I do not suggest that Cole is wrong to identify a commitment to anti-racist struggles, as their workplace activism was inherently also directed against apartheid, but rather that there are complications to this argument that cannot simply be brushed off as the outcome of white machinations (43) or of frustrated working-class action (45).

Ascribing an inherent cosmopolitanism and internationalism to Durban’s dockworkers betrays a similar idealism. Such claims have more basis in abstract notions of dockworker radicalism and internationalism than in the experiences of Zulu dockworkers. At least in the 1940s and ‘50s, these workers displayed a strong rural orientation. Their rural and Zulu patriarchal identities were much stronger than their commitment to and interest in international struggles. Garveyism did spread via South Africa’s port cities but it is not clear that Durban’s dockworkers were key figures in such dissemination. Cole implies this link but offers little direct evidence. This again does not mean that dockers did not play a significant role in promoting such ideas (indeed, we do know that strikes spread from port to port), but rather that overdetermined notions of labor internationalism and cosmopolitanism obscure a more nuanced and often contradictory reality.

Cole’s commitment to investigating the intersection of race and class is commendable but the extent of his approach is limited. There is no real discussion of gender nor of the less progressive ideals many dockworkers held, including anti-urban rural conservatism, patriarchal values, and strong anti-Indian sentiments. Importantly, the book does not grapple with the complicated urban-migrant relations that are such a prominent theme in South African labor history. By leaving romantic notions of working-class progressivism unchallenged and by not fully exploring the differences of workers’ experiences outside the Global North, Cole misses a chance to add nuance to a labor history paradigm that remains rooted in Western experiences.

None of this changes the fact that Dockworker Power makes an important contribution to the literature on dock labor. It provides detailed and well-researched dockworker histories of two major global ports. Moreover, its North-South comparison helps Cole make his important case against tendencies to focus on either class or race—such tendencies are all too common, especially in American academia and politics.

Ralph Callebert teaches global and African history at Virginia Tech. His research interests are in African and global history, global labor history, gender and households, and the informal economy. He has a Ph.D. in history from Queen’s University in Canada and received an M.A. from the Department of Economic History and Development Studies at the University of KwaZulu-Natal in Durban, South Africa. Follow him on Twitter @RCallebert.