The cartoon appeared in the October 1949 issue of New Africa, the monthly anti-imperial bulletin of the New York-based Council on African Affairs (CAA). In it, Eric Louw, a leading South African Apartheid official, was shown dressed in a schoolmaster’s gown speaking to a group of white South African students. He was saying, “if it’s good enough for America, it’s good enough for us.” Behind him appeared a figure of a hooded Ku Klux Klan member clutching a cross symbolizing the links between Jim Crow and Apartheid.

The shared struggle between African Americans and Black South Africans fighting white supremacy in the United States and South Africa are the subject of Nicholas Grant’s Winning Our Freedoms Together: African Americans & Apartheid, 1945-1960. Building on the efforts of Black people involved in the Popular Front and the fight to defeat fascism, the post-war decades witnessed a surge in transnational Black activism as people of color rose up in protest of white supremacy in its various forms. From the onset, radical Black internationalism met with fierce resistance from whites everywhere. Rising to power in 1948, South Africa’s Nationalist Party garnered international attention for their particular brand of racism: Apartheid.

In this transnational study of white supremacy and Black resistance, Grant examines how African Americans and Black South Africans drew inspiration from each other in their shared struggle to combat white supremacy in the United States and South Africa. Here, African Americans and Black South Africans faced the limitations of the Cold War. In both countries, white officials deployed the rhetoric of anti-communism to smear Black radicals, even going so far as to revoke the passports of Black activists like W.E.B. Du Bois and Z.K. Matthews, viewed by their respective governments as posing a particular threat. While acknowledging “the disruptive effect that the Cold War had on the development of the global anti-apartheid movement” and Black internationalism more broadly, Grant demonstrates the continued transnational activism pursued by African Americans and antiapartheid activists in South Africa (2). “Even as Cold War anticommunism disrupted anticolonial networks and exacerbated political tensions, there remained an unwavering belief among a range of black activists on both sides of the Atlantic that their respective struggles against race discrimination were linked” (7).

Grant conducted extensive research for Winning our Freedoms Together, including archival records and newspapers in the United States and South Africa. The book is organized into four parts. Part I on the Cold War restates a familiar argument regarding anticommunism and racial politics. Building on the work of historians like Brenda Gayle Plummer, Mary Dudziak, Thomas Borstelmann, Kevin Gaines, and Penny Von Eschen, Grant shows how anticommunism shaped Black activism on both sides of the Atlantic.1 Modeling their policies on U.S. anticommunist legislation, South African government officials used anticommunism to suppress Black resistance to Apartheid. As global opinion shifted against white rule, “anticommunism provided a convenient and up-to-date political ideology around which South Africa’s domestic racial policies could be justified to the outside world” (35). 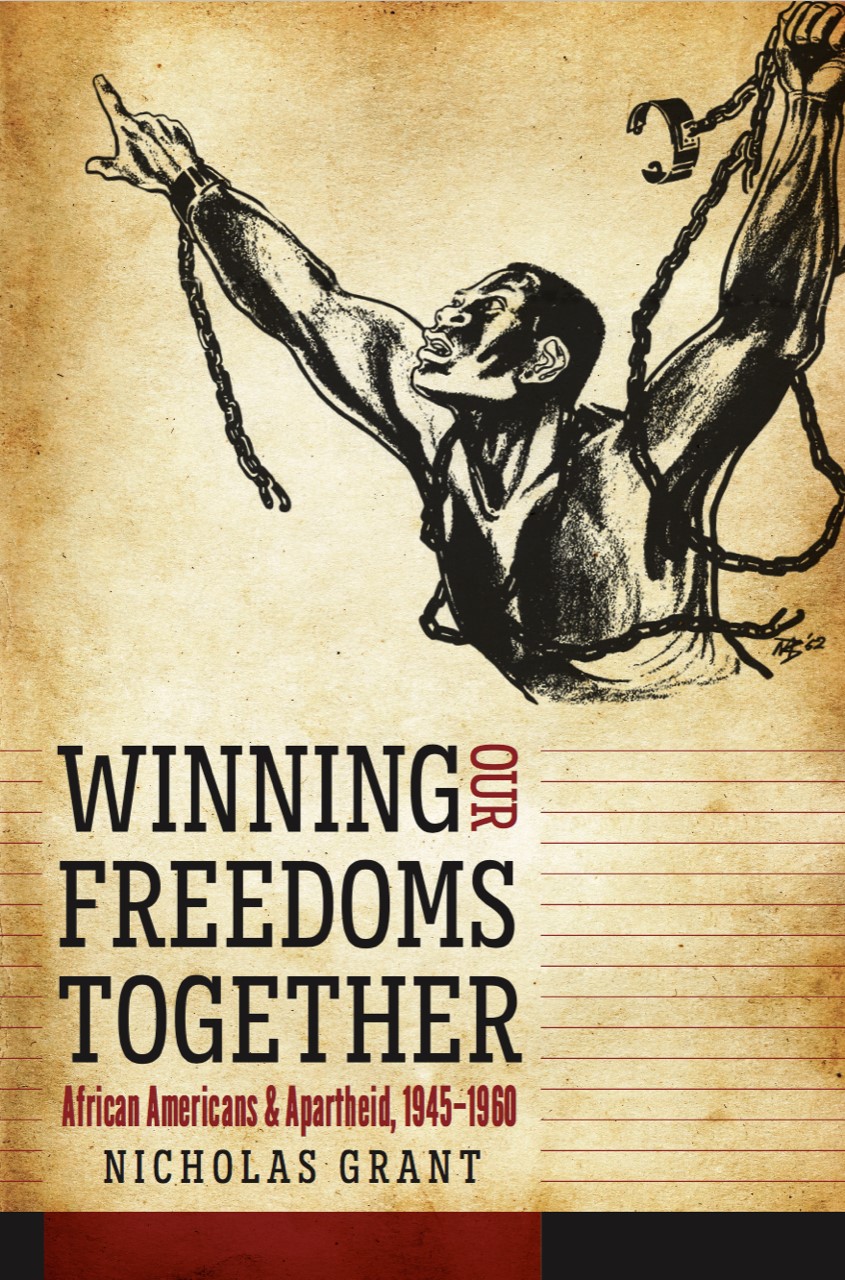 Some of the most original material appears in Part III on prison politics within the international anti-apartheid movement. Pioneered by historians such as Heather Ann Thompson and Talitha LeFlouria, carceral studies has produced a plethora of new work on prison politics. Much of this scholarship, however, has focused on the United States. Drawing on testimony from political prisoners like Albert John Luthuli and Raymond M. Mhlaba, Grant reveals how African Americans and Black South Africans transformed the prison from a space of repression into a site—tangible and symbolic—of transnational anti-apartheid resistance. The imprisonment of anti-apartheid activists during the Defiance Campaign (1952) and the Treason Trial (1956-1961) found resonance with African Americans who had experienced political imprisonment. Long a site of colonial oppression, the imprisonment of Black activists was transformed into an opportunity for resistance by African Americans and Black South Africans protesting “the draconian nature of the apartheid regime” (121).

The international anti-apartheid struggle, like other political movements, was not without its faults. The last three chapters of the book are devoted to the issue of gender within anti-apartheid politics, including the privileged role of heroic masculinity. Grant counteracts this imbalance with two chapters devoted to the role of Black women, including the National Council of Negro Women and the ANC Women’s League. All too familiar with racial and gender discrimination, Black women used their status as mothers to craft their own strand of Black internationalism centered on the rights of children and Black families.

Published in the Justice, Power, and Politics Series by the University of North Carolina Press, Winning Our Freedoms Together sheds new light on one of the most significant international struggles of the twentieth century. A good portion of the material presented here will be familiar to students of post-war racial politics. In addition to the works cited by Grant, recent work by Ron Nixon and Daniel Magaziner on South Africa’s international propaganda war and Black consciousness in South Africa respectively offer useful accompaniments for understanding the transnational dimensions of Apartheid and anti-racist activism.

One of the most important contributions made by Winning Our Freedom Together is Grant’s intervention within ongoing debates regarding the role of Black liberals. Pushing against the equation of Black internationalism and left-wing anti-imperialism, Grant argues that the “global struggle against racism did not always involve an outright rejection of liberal democracy or the policies of the U.S. government.” Rather, “African Americans in the NAACP, NCNW, and ACOA all worked to influence U.S. foreign policy ‘from the inside’ and in the process established connections with black South Africans in ways that continued to emphasize their shared experiences of race discrimination” (13). Here, one wishes Grant had gone a bit further in reflecting on the place of Black liberalism beyond the confines of the Cold War. One can find examples of Black internationalists promoting a liberal vision as far back as the Haitian Revolution. During the late nineteenth century, representatives of the Tuskegee Institute and the German government worked together promoting liberal imperialism in colonial Africa. Rather than existing in separate spheres, these and other examples of Black international liberalism highlight the sometimes complex partnerships forged in the name of racial progress. Written with an eye towards the overlapping networks undergirding global white supremacy and Black internationalism, Winning Our Freedom Together offers a useful model for thinking about the institutions Black people must struggle with and within in order to win their freedom.

Jessica Ann Levy is a Postdoctoral Research Associate in the Department of African American Studies at Princeton University. She received her doctorate from Johns Hopkins University in 2018 and is currently writing a book on the corporatization of the global black freedom struggle starting with Black Power in the 1960s and ending with the international anti-apartheid movement. Follow her on Twitter @jessicaannlevy.