The publication of W.E.B. Du Bois’s Data Portraits: Visualizing Black America gives new meaning to Du Bois’s famous sentence from The Souls of Black Folk: “The problem of the twentieth century is the problem of the color-line.” The quote appears as an epigraph to this collection of colorful data portraits originally featured in the American Negro Exhibit at the Exposition Universelle, the Paris World Fair of 1900. Editors Whitney Battle-Baptiste and Britt Rusert (both professors at the University of Massachusetts-Amherst) have teamed up to curate a beautifully crafted interdisciplinary volume that further illustrates the genius of W. E. B. Du Bois, and also displays the ingenuity and resourcefulness of Black intellectuals at the turn of the twentiethth century.

The 7 inch x 10 inch hardcover book is a beautiful object in itself. The front and back inside covers are filled with colorful thumbnail images of the numbered plates, giving the book a hypertextual quality. The book also features wonderfully informative essays from Battle-Baptiste, Rusert, Aldon Morris, Mabel O. Wilson, and Silas Munro (who also wrote the notes for each plate).

Battle-Baptiste and Rusert begin their introduction by referring to Du Bois’s short story “The Princess Steel.” Rusert recently collaborated with Adrienne Brown (assistant professor of English at the University of Chicago) to publish the lost story in a 2015 issue of PMLA.1 Roughly dated to 1908-1910, “The Princess Steel” features the reclusive Black professor Hannibal Johnson and his megascope, a kind of proto-virtual reality device, which sits in a room at the top of a skyscraper on lower Broadway in Manhattan. The megascope draws on sociological data (among other sources of information) to immerse the user in a strange, mythic world centered around the production of steel, one of the most important elements in industrialization. The story is part of a futuristic strain in Du Bois’s writing. Sheree Thomas included Du Bois’s 1920 short story “The Comet” in the Black speculative fiction anthology Dark Matter (2000), linking him to the Afrofuturist movement. Rusert and Battle-Baptiste connect Du Bois’s futurism to his sociological project of representing the Black experience through data visualizations. As they write, “From his creation of the megascope in ‘The Princess Steel’ to his appeal for a projector to enlarge and present his sociological data at Atlanta University, Du Bois’s thinking on the politics of the visual also extended to an interest in photography, film, and other visual technologies, as well as to the politics of access to these technologies.”2 Rusert and Battle-Baptiste emphasize that the items in the American Negro Exhibit were arranged as counternarratives to the degrading representations of Black people that dominated American popular culture. They note that “the politics of visuality, and the very question of black visibility, were central to Du Bois’s thought…”3

After the Paris exhibit, the plates were deposited in the Library of Congress. They were always available to researchers, but the recent digitization of these images has given them a second life on the Internet. The images have gone viral over social media precisely because they resonate strongly with contemporary trends in data analysis, infographics, and data visualization. Adding to Du Bois’s many scholarly accolades, this book hails him as an innovator in digital sociology and digital humanities. 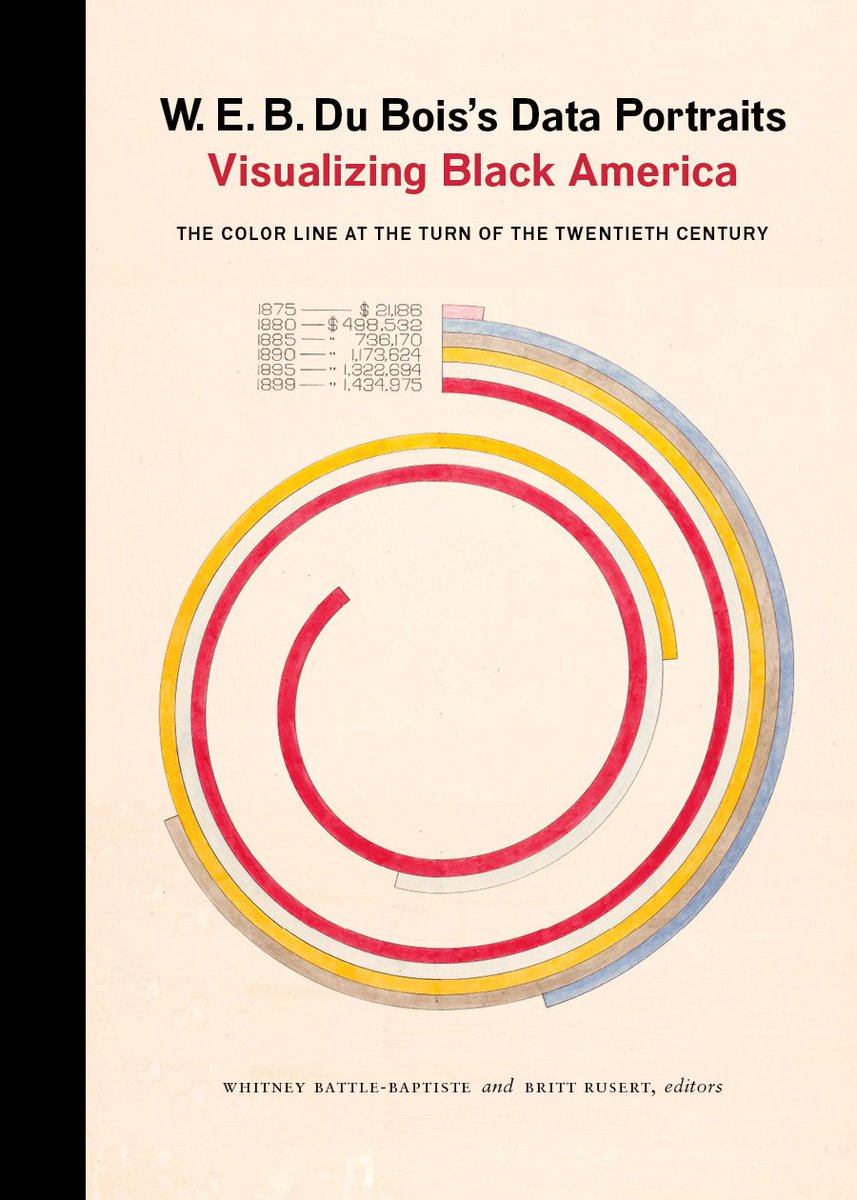 All of the introductory essays in this volume mention that the American Negro Exhibit in Paris was far from a one-man project. Du Bois was the brightest star in the show, but he existed in a constellation of Black scholars who collaborated on the exhibit. Among the notable contributors was William Andrew Rogers, who helped to coordinate the design and production of Du Bois’s plates. Thomas Calloway, a lawyer and educator, organized the entire American Negro Exhibit, of which the plates were a part. Daniel Alexander Payne Murray, a librarian at the Library of Congress, gathered the published works of Black writers to include in the exhibit. And behind Du Bois’s data portraits was a network of scholars from historically Black colleges, including Atlanta University, who helped to compile the data upon which the images are based.

Mabel O. Wilson, professor of architecture at Columbia University, and author of Negro Building: Black Americans in the World of Fairs and Museums (2012), provides crucial background on the 1900 Paris Exposition and the significance of Du Bois’s participation in the event. Wilson emphasizes the importance of cartography in the plates, explaining how Du Bois maps the geographic and spatial location of Black people in the United States, from the overall patterns in the states, to the clusters in specific counties and cities. Plate 1, the first of 36 plates comprising The Georgia Negro: A Social Study, is particularly striking in its international trajectory. The globe is split into two hemispheres, showing the lines tracing the paths of the trans-Atlantic slave trade, and emphasizing the shades of Black clustered on the African continent, South America, the Caribbean, and the American South, with the state of Georgia marked by a star. The visual storytelling in this plate links The Georgia Negro study to the Atlantic world, and also gestures to Du Bois’s burgeoning Pan-Africanism.

Each of the plates is accompanied by insightful notes composed by Silas Munro, assistant professor at Otis College of Art and Design. Munro’s notes contextualize the design elements in each plate showing the aesthetic ingenuity of Du Bois and his collaborators who creatively used colors and patterns to accentuate the data, and to show the spatial segregation of Black people within the United States. The plates are a reminder that the artistic was as much a part of Du Bois’s intellectual strategy as the sociological and the historical. As Aldon Morris puts it, “Du Bois was acutely aware that the packaging of the exhibit was as important as the data depicted. He understood what Duke Ellington expressed thirty years later: It don’t mean a thing if it ain’t got that swing.”4

As Russert and Battle-Baptiste conclude, this volume can contribute to “envisioning how data might be reimagined as a form of accountability and even protest in the age of Black Lives Matter.”5 But the volume also portends the techno-solutionism of our time. These images remind us that the Silicon Valley technocrats who control powerful digital platforms, including the very ones on which Du Bois’s data portraits are now being circulated, remain woefully dismissive toward sociological knowledge of race (and gender), too often assuming the neutrality of their data. Their reckless failure to reckon with the implications of racism on their platforms has already endangered marginalized populations, and will likely continue to do so. Along with Du Bois’s prophetic statement about the twentieth century and the color-line, we might also consider the science fiction writer Samuel R. Delany’s riff on Du Bois: “The problem of the twenty first century is going to be the problem of misinformation.”6

In his essay in the volume, Aldon Morris, author of The Scholar Denied: W. E. B. Du Bois and the Birth of Modern Sociology, restates his case that the Du Bois-Atlanta School of Sociology should be properly recognized as the foundation of the discipline because “Du Bois was among the first professors in the nation to train students in sociological theory and empirical methodologies.”7 This volume can be productively taught as a companion piece to Morris’s The Scholar Denied by showing visual examples of the sociological innovations that Morris describes.

The book could also be used in tandem with Du Bois’s most widely-read work, the 1903 essay collection The Souls of Black Folk. The plates on Georgia correlate with chapters such as “Of the Black Belt,” “Of the Training of Black Men,” and “Of the Wings of Atalanta,” in which Du Bois describes life in rural and urban Georgia and uses these locations to advocate for the education and uplift of Black people.