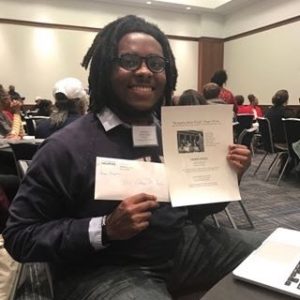 Adam McNeil is a PhD student in the Department of History at the University of Delaware. He is an African American Public Humanities Initiative and Colored Conventions Project Scholar. His primary interest is in the nineteenth century with a focus on how Black women derived notions of belonging in the United States during the abolitionist movement. His masters thesis, “Finding a Home: Colonization, Performative Citizenship, and the Civil War in the Lives of Black Women Abolitionists, 1830-1865,” examines how Maria Stewart, Sarah Forten, Charlotte Forten, Harriet Tubman, and Sarah Parker Remond each understood how, despite their embattled statuses as nominally free Black women in a slaving nation, they should benefit from the spoils of American economic success. They saw how central their race’s labor was to the founding of the nation, and all its success, which explains why they each rebuked colonization as a means to acquire emancipation and liberation. Follow him on Twitter @CulturedModesty.