Hettie V. Williams is an Associate Professor of African American history in the Department of History and Anthropology at Monmouth University. She has taught survey courses in U.S. history, Western Civilization, and upper division courses on the history of African Americans at the university level for more than fifteen years. Her teaching and research interests include: African American intellectual history, gender in U.S. history, and race/ethnicity studies. She has published several book chapters and essays, and has edited/authored five books. Her latest book publications include Bury My Heart in a Free Land: Black Women Intellectuals in Modern U.S. History (Praeger, 2017) and, with Dr. G. Reginald Daniel, Race and the Obama Phenomenon: The Vision of a More Perfect Multiracial Union (University Press of Mississippi 2014). Her forthcoming books are A Seat at the Table: Black Women Public Intellectuals in U.S. History and Culture (University Press of Mississippi, 2021) and Garden of Opportunity: Black Women and the Civil Rights Movement in New Jersey (Rutgers University, Press, 2021). Dr. Williams has also contributed opinion pieces, book reviews, and essays to media outlets such as the HuffPost, Daring Woman Magazine, the Asbury Park Press, the Star Ledger, and the award-winning peer reviewed blog Black Perspectives. She is also a host on the New Books Network Intellectual history channel and a research historian on “My Buddy: The WWII 369th Documentary Project.” She also hosts a weekly podcast show with Monmouth University faculty called “This Week in Black History, Society, and Culture.” Contact me via email here.

Tyler Parry is an Assistant Professor of African American and African Diaspora Studies at the University of Nevada, Las Vegas. He received a Ph.D. from the University of South Carolina. He serves in a number of capacities within the profession, including as an editor for H-Afro-Am and as Book Review Editor for Black Perspectives. His research examines slavery in the Americas, the African diaspora, and the historical memory of slavery in the United States. His first book, Jumping the Broom: The Surprising Multicultural Origins of a Black Wedding Ritual (University of North Carolina Press, 2020) is the first definitive examination of the “broomstick wedding,” a popular marital tradition usually associated with Black Americans. Additionally, he is co-authoring a book with historian Charlton W. Yingling that examines how Europeans and Euro-Americans used canines to attack and subordinate Black people who resisted slavery and oppression.

Celeste Day Moore is an Assistant Professor of History at Hamilton College. She is a historian of African American culture, media, and Black internationalism in the twentieth century. Her first book, Soundscapes of Liberation: African American Music in Postwar France (Duke University Press, 2021), traces the history of African-American music across the Francophone world, where it took on new meaning, value, and political power alongside the decolonization of the French empire. Most recently, her work has appeared in American Quarterly and the first edited volume of AAIHS. She received her doctorate from the University of Chicago and has been a fellow at the Institut d’Études Politiques in Paris and the Carter G. Woodson Institute for African-American and African Studies at the University of Virginia. 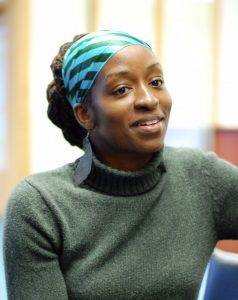 Grace D. Gipson is an Assistant Professor of African American Studies at Virginia Commonwealth University. She received her Ph.D. in African American Studies with a designated emphasis in New Media from the University of California Berkeley, MA in African American Studies at Georgia State University, and BA in Psychology from Clark Atlanta University. Grace is Black future feminist/pop culture scholar whose research explores Black popular culture, digital humanities, representations of race and gender within comic books, Afrofuturism, and race and new media. Grace’s recent publications include “Creating and Imagining Black Futures through Afrofuturism” in the edited collection #identity: Hashtagging Race, Gender, Sex, and Nation; “What Can The Hunger Games Teach Us About Bitch Planet’s Megaton?” as part of Hard Women, Hard Time: Bitch Planet Comics Studies Roundtable in The Middle Spaces; and “Afro-Futurism’s Musical Princess Janelle Monae: Psychadelic Soul Message Music Infused with a Sci-Fi Twist” in the edited collection Afrofuturism 2.0: The Rise of Astro-Blackness, Vol. I. Her current book project seeks to explore Black female identities as personified in comics and fandom culture. A second project examines how online Black female academic and popular networks produce cultural and technical capital, which act as safe spaces that showcase, interrogate, and celebrate the blending of popular culture and the academy.

Adam McNeil is a PhD Candidate in the Department of History at Rutgers University focusing on Black Women’s lives during the Revolutionary and Founding eras in the Chesapeake Bay. His scholarship focuses on how enslaved women were key contributors to the Chesapeake’s culture of rebelliousness during the Age of Revolutions, which, by implication, centers the region as a critical site of slave insurrection and revolutionary activity during the late eighteenth and early nineteenth century. Secondarily, he focuses on histories of Appalachian mountain slavery and labor histories in the eighteenth and nineteenth centuries. His research has been supported by fellowships from the University of Michigan’s Clements Library, the David Center for the American Revolution at the American Philosophical Society, and the Omohundro Institute of Early American History & Culture (OI). In 2021, he became the Omohundro’s inaugural OI Audio Fellow, a new fellowship meant to present “fresh histories of the American Revolution” via the narrative podcast medium. In addition to academic writing, he regularly contributes to academic blogs Black Perspectives and The Junto, along with interviewing scholars on the New Books in African American Studies podcast, where he has interviewed nearly one hundred scholars about their works in African American Studies and African American History.