Just three months after revolutionary forces successfully ousted Cuban dictator Fulgencio Bautista on January 1, 1959, the new revolutionary government of Cuba under Fidel Castro made a spectacular announcement: the island would embark upon a public, government-backed anti-discrimination campaign. During these early years of the Cuban Revolution, privately-run and racially segregated beaches, social clubs, workers’ unions, and schools became integrated, while greater economic, social, and educational opportunities arose for Cuba’s marginalized classes of African descent. As various scholars of politics in revolutionary Cuba have demonstrated, this campaign radically changed the everyday lives and opportunities of people of African descent on the island.

Yet, as Devyn Spence Benson’s brilliant and recently published book, Antiracism in Cuba: The Unfinished Revolution, reveals, the story of antiracism in early revolutionary Cuba is not that simple. A critical examination of the thorny and complicated politics of antiracism in Cuba during the first years of the Revolution (1959-1961), Benson’s monograph upends the long accepted notion that the revolutionary government was “mostly successful” in eradicating discrimination. In fact, as Benson argues, “racism and antiracism coexisted and developed alongside each other in revolutionary Cuba”—and, as she expertly shows, the revolutionary government’s commitment to raceless nationalism effectively silenced genuine antiracist transformations and political activism on the island. Even more, Benson shows how revolutionary officials perpetuated “racist narratives and images that devalued blackness” through an analysis of revolutionary press and print media.

As Antiracism in Cuba documents, Afro-Cubans (some of whom were forced into U.S. exile, not just in southern Florida—where they faced racist white Cuban exiles—but also New York City) worked tirelessly to foment an antiracist “revolution inside of the revolution” through words and action. Indeed, in this sense, Benson’s book is part of a growing group of scholarly works critically reexamining the many “revolutions” within the Cuban Revolution. Reading Michelle Chase’s recently published Revolution within the Revolution: Women and Gender Politics in Cuba, 1952-1962, for example, would work well alongside Benson’s Antiracism in Cuba to grasp the multifaceted gendered and racialized struggles of marginalized Cubans as they reconfigured their lives during these tumultuous years. 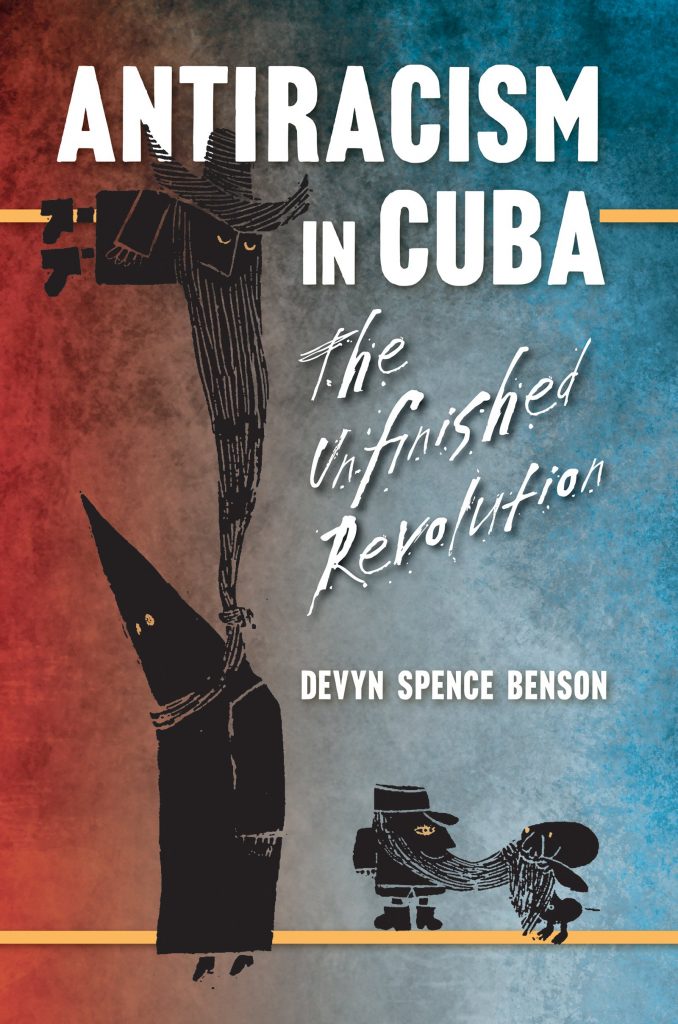 But in this review, I am not going to focus on Benson’s contributions to the historiography of the Cuban Revolution; rather, I want to impress upon readers why Benson’s book matters for scholars of race and Blackness in the Americas—particularly those interested in charting the formation and transformation of the tenuous myth of “racial harmony” that emerged at the end of colonial rule in nineteenth century Latin America and the Caribbean. By “racial harmony,” I mean the politics of a strategic and intentional silencing of race within a larger project of national unity.

In response to political pressure and racial justice activism of Afro-Cuban groups, Fidel Castro announced the government’s national anti-discrimination campaign on March 22, 1959. Over time, segregated beaches, schools, work centers, and social clubs were integrated—including Black social clubs that had historically served the real needs of Afro-Cubans of means. These Black clubs were targeted and eventually shut down, revealing the limits of the revolutionary government’s antiracist vision. Crucially, as Benson finds, Castro claimed that the revolutionary government’s anti-discrimination campaign sought to accomplish the unfulfilled late nineteenth century project of building a “raceless and unified Cuba.” Forged during the Wars of Independence against Spain, this idea of “racelessness” in Cuba found its most powerful champion in the Cuban national hero José Martí who wielded a politics of raceless nationalism against Spain’s colonial forces (for more, see Ada Ferrer’s Insurgent Cuba: Race, Nation, and Revolution, 1868-1898). The popular late nineteenth century rhetoric of “not black, not white, only Cuban” served to buttress national unity against Spain, but ultimately failed to address the continued reality of racism and anti-Blackness faced by Cubans of African descent in the long aftermath of the war. The government-backed massacre of Afro-Cuban members of the Independent Party of Color in 1912 proved the deadly limitations of this raceless politics in the republic.

These ghosts of failed racial reckonings were summoned and appropriated by Cuba’s revolutionary leaders in 1959. Throughout Antiracism in Cuba, Benson repeatedly shows how the new revolutionary government “mobilized the legacies of Martí and [Antonio] Maceo [the famed Afro-Cuban Independence fighter] to construct the revolution as the fulfillment of an interrupted historical legacy.” In the Cuban communist party newspaper, Noticias de Hoy, for example, political cartoons and drawings sought to link Martí and Maceo with the young revolutionary leadership’s projects of raceless nationalism. “The significance of Martí and Maceo for so many Cubans,” Benson writes, “and the legacy of racial harmony coming out of independence struggles meant that leaders on the island and in exile had to engage with these ideas in defining revolution.”

We should thus place Benson’s work within a larger historical scholarship of “racial harmony” in nineteenth and twentieth-century Latin America. As Marixa Lasso reveals in Myths of Harmony: Race and Republicanism during the Age of Revolution, Colombia, 1795-1831, Colombia was one of the first republics to elaborate a nationalist rhetoric of racial harmony—a version of raceless nationalism—during the early nineteenth century Wars of Independence against Spain. When the Spanish Cortes in the early 1810s argued against citizenship rights to pardos (people of African descent) because it could potentially create a Haitian Revolution in Colombia, Colombian patriots mobilized the notion of a racially harmonious society. In the immediate Wars of Independence, Colombian patriots linked racial equality to patriot nationalism in opposition to Spain who denied pardo citizenship rights.

However, Lasso demonstrates that while this myth of harmony provided Colombians of African descent with the tools and political language to air grievances against both the Spanish and fellow patriots, the denunciation of racial discrimination became an unpatriotic and rebellious act—not entirely unlike that of late nineteenth century Cuba or 1959 revolutionary Cuba as documented by Benson. In early nineteenth century Colombia, the dangerous charge of fomenting “race war” denied the legitimacy of real racial grievances elevated by Afro-Colombian patriots. In some ways similar to the early nineteenth century Colombian case, some Afro-Cubans who were critical of the revolutionary government’s racial politics were decried as racist, divisive, and even counterrevolutionary.

Juan René Betancourt, a longtime Black activist who was forced into exile to the United States in 1961, was among such “divisive” Afro-Cuban figures that Benson profiles. Joining other Afro-Cubans in protest, Betancourt criticized the revolutionary government’s decision to close historically Black social clubs on the island—no doubt a bold act in the face of revolutionary colorblind racist policies. Eventually, the revolutionary leadership banned Betancourt’s book El Negro on the grounds that it was racist. Betancourt is one of many critical Black Cuban voices that Benson importantly brings to the forefront of this study.

In the conclusion of Antiracism in Cuba, Benson highlights another critical Afro-Cuban voice, the documentary Afro-Cubana filmmaker Sara Gómez, who “carved out [space] for continued debates about racial equality” while both supporting and challenging the revolutionary government. Benson highlights the “seemingly large role black and mulata women artists” like Goméz played in revolutionary Cuba and writes that additional research on the subject is needed. Given the predominance of Afro-Cuban male voices in Antiracism in Cuba, the example of Gómez and other Afro-Cubana activists appears to gesture to a different (possibly woman-centered?) Black, intersectional politics. For now, however, Benson has provided an indispensible foundational study that will set the agenda for future scholars of race, racism, and Black Studies in Cuba and the Americas.

Comments on “Contesting the Myth of (Revolutionary) Racial Harmony”