In recent years, we have witnessed a significant growth in the literature on Black Britain. The works of Paul Gilroy, Hakim Adi, Minkah Makalani, Joshua Guild, and Kennetta Hammond Perry, among others, have offered invaluable perspectives on how “people of African descent navigated the politics of being both Black and Britain.”1 Collectively, these works play a key role in decentering the United States in African Diaspora Studies and, in so doing, capture the richness and depth of the history of the modern African diaspora.

Marc Matera’s new book Black London: The Imperial Metropolis and Decolonization in the Twentieth Century joins this exciting body of scholarship. Published by the University of California Press in 2014, Matera’s Black London tells the story of how a diverse group of black intellectuals and activists, mostly from Africa and the Caribbean, carved out a crucial space in London to challenge imperialism during the three decades after World War I. Drawing on a wealth of primary sources, Matera makes a compelling argument that London “became the locus of black resistance to racism and empire” and a significant site for black internationalist politics during the twentieth century (p. 23). 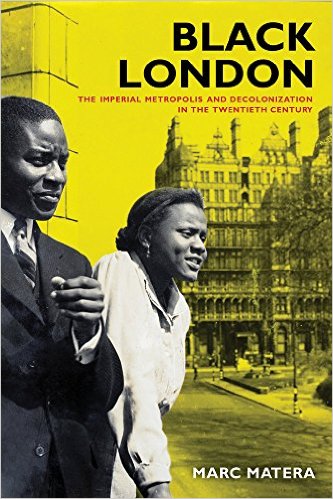 Notwithstanding the challenges that black men and women endured in London—including racial discrimination and housing segregation—they worked together in the “administrative center and capital of the British empire” to launch a “radical overhaul of the structures of white supremacy on a supranational scale” (p. 16). “Compared to the colonies,” Matera points out, “London offered greater freedom of expression and association and gave Africans and Afro-Caribbeans a privileged vantage point concerning the growing menace of fascism and the machinations of the British government in response to it” (p. 64).

In seven chapters, packed with lots of details, Matera offers an intellectual and social history of a diverse group of black men and women residing in London during the twentieth century. In his book, readers encounter several well-known black internationalist activists and intellectuals including Kwame Nkrumah, Amy Ashwood, Jomo Kenyatta, Una Marson, and Nnamdi Azikiwe. Matera pays particular attention to the kinds of networks they formed and the varied strategies they employed in their efforts to dismantle global white supremacy.

Significantly, Matera’s book advances the vibrant scholarship on twentieth century black internationalism by departing from scholarly narratives that privilege the ideas and activism of black men, and by offering a rigorous gender analysis. As Matera explains in the text, the black population in London remained largely male during the early twentieth century because of two key factors. First, the outbreak of the First World War resulted in an influx of black men as soldiers and laborers from Nigeria, Ghana, Jamaica, and other British colonial territories. Second, the small number of black women in London reflects the gender disparity in education during this period. According to Matera, few wealthy black families in West Africa and the Caribbean sent their daughters to study in Britain during the early twentieth century.2

It was not until the 1940s that black women from colonial territories began arriving in Britain in record numbers. In 1949, an estimated 644 black women from West Africa (mostly from Nigeria) and several hundred black women from the British Caribbean were studying in Britain.3 According to Matera, “If African and Afro-Caribbean women faced many of the same challenges as their male counterparts…they were more isolated, and many suffered from intense loneliness that exacerbated the sting of British racism in its many forms.”4 In black circles, women also endured a number of challenges. Black internationalist organizations in London such as the West African Students’ Union (WASU) and the League of Colored Peoples (LCP) were male-dominated organizations that generally excluded women from visible leadership and decision-making positions. Moreover, in London, expressions of black masculinity further marginalized black women’s ideas and activities. “[T]he views and self-conceptions of most black activist-intellectuals,” Matera acknowledges, “reaffirmed gender hierarchy and rested on the construction of a self-determining, heterosexual and male subject” (p. 20).

Despite these realities, black women activists and intellectuals in London still played key roles in shaping black internationalist movements and discourses during this period. Analyzing their writings and charting their political activities primarily from the 1930s to the 1950s, Matera shows how black women intellectuals and activists practiced “feminist internationalism”—drawing on the seminal work of Mrinalini Sinha, Donna Guy, and Angela Woollacott. As black feminist internationalists, the women featured in Matera’s book actively resisted patriarchy and carved out spaces in London in which to agitate for universal black liberation. They defied traditional expectations of black womanhood and challenged the “strictures imposed on black women’s bodies in the name of respectability.”5

Amy Ashwood, the first wife of charismatic black nationalist leader Marcus Garvey and co-founder of the Universal Negro Improvement Association (UNIA), was among the vibrant community of black feminist internationalists residing in London during the twentieth century. Although Ashwood is only briefly mentioned in the writings of various scholars such as George Padmore (Pan-Africanism or Communism) and Peter Abrahams (The Coyaba Chronicles), Matera highlights Ashwood’s significant contributions to black culture and politics in London. In 1922, following her divorce from Garvey, the Jamaican-born Ashwood arrived in London where she found a ‘home away from home.’ In 1924, she helped to establish the Nigerian Progress Union (NPU), an anticolonial organization, with Nigerian activist Ladipo Solanke.6 Years later, in 1935, she opened the International Afro Restaurant and then the Florence Mills Social Parlour, which both provided significant spaces for black activists and intellectuals to socialize and forge political alliances.

Like Ashwood, Jamaican poet Una Marson, another black feminist internationalist, “established a vocal presence in London” (p. 143). Born in 1905 in St. Elizabeth, Jamaica, Marson relocated to London during the early 1930s, and later worked for the British Broadcasting Corporation (BBC). During her time in London, Marson was actively engaged in several political organizations and used her writings and speeches to champion women’s rights and openly condemn racial inequality in Britain and throughout the diaspora. In a 1935 speech, delivered at the Twelfth Annual Congress of the International Alliance of Women for Suffrage and Equal Citizenship (IAWSEC), Marson condemned lynching in the United States and emphasized the similarities between the experiences of people of African descent in Britain and other parts of the globe. “Even in London,” she explained, “one sees discrimination against black people, even those who are British subjects.” “Negroes are suffering under enormous difficulties in most countries in the world,” she added.7

In addition to well-known figures like Una Marson and Amy Ashwood, Matera introduces readers to several lesser-known black feminist internationalists who left their mark in the historical record. One such figure is Nigerian-born Kofoworola Aina Moore, an active member of the West African Students’ Union (WASU), who was the first African woman to graduate from Oxford University. Through her writings, Moore called for the expansion of African women’s rights and emphasized the need for women to have equal access to education. Her colleague Constance Cummings-John, a Sierra Leonean activist-intellectual who was also a member of WASU, articulated similar views. After traveling to the United States in 1937, Cummings-John became increasingly concerned about racial prejudice and the need to improve educational opportunities for black women in diaspora. Reminiscent of the experiences of Pan-African Feminist Adelaide Casely Hayford, a pioneer of women’s education in Sierra Leone who resided in London during the late nineteenth century, Cummings-John went on to become principal of a girl’s school in Freetown.

These women activists and intellectuals broadened the discourse on black internationalism by centering the concerns and experiences of black women in the diaspora. Through their writings and political activities in London, Una Marson, Amy Ashwood, Kofoworola Aina Moore, Constance Cummings-John, and many other women asserted their own autonomy within male-dominated and masculinist movements that often excluded them. Marc Matera’s Black London serves as an important reminder that we must be vigilant and intentional about ensuring that we do not replicate masculinist narratives. In the words of Matera, “So long as black internationalism is conceptualized solely in terms of the intellectual and political projects of male Pan-Africanists, women…can only appear as marginal and allusive figures, dilettantes even.”8 As this fascinating new book reminds us, black women’s ideas and activism were central, not peripheral, to black internationalist and anticolonial movements.