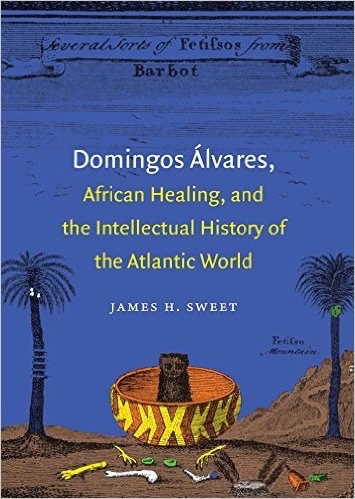 On April 5, AAIHS blogger Chris Cameron described five approaches to African American Intellectual History. Cameron’s approaches included intellectual history as a way to understand the social world, textual histories, psychobiographies, and the social history of ideas. Intellectual histories of the enslaved, however, may fit uneasily into these categories. What do historians of the earlier period do when dealing with black diasporic subjects laboring and living in a world of ideas, philosophies, and cosmologies but largely without alphanumeric texts? Does this black intellectual production only start becoming intellectual history when texts written by people of African descent begin to appear? What new possibilities for intellectual work open when the enslaved and the period of slavery become central?

Instead of approaches, below are five written texts I often return to when thinking with (not necessarily through) and engaging the intellectual production of people of African descent circling the Atlantic before emancipation. In rigorous and provocative ways, each text challenges me to cross time and space, to remain interdisciplinary, and to push my own conception of archive, history, text, and blackness to their limit in an effort to unlock (where possible) sweetness in pain, vulnerability and terror, radical black humanity, and insurgent dreams of freedom.

I realize that even here I privilege the written word and the academic form. What others texts–beyond the word and beyond the Tower–might inspire and challenge?

“This reflects the fact that we have still to recognize that being a woman is, in fact, not extractable from the context in which one is a woman-that is, race, class, time, and place. We have still to recognize that all women do not have the same gender. In other words, we have yet to accept the fact that one cannot write adequately about the lives of white women in the United States in any context without acknowledging the way in which race shaped their lives…” – Elsa Barkley Brown

Michael A. Gomez, Exchanging Our Country Marks: The Transformation of African Identities in the Colonial and Antebellum South. Chapel Hill: University of North Carolina Press, 1998.

“The transatlantic slave trade brought individuals from diverse African regions and cultures to a common destiny in the American South. In this comprehensive study, Michael Gomez establishes tangible links between the African American community and its African origins and traces the process by which African populations exchanged their distinct ethnic identities for one defined primarily by the conception of race. He examines transformations in the politics, social structures, and religions of slave populations through 1830, by which time the contours of a new African American identity had begun to emerge. After discussing specific ethnic groups in Africa, Gomez follows their movement to North America, where they tended to be amassed in recognizable concentrations within individual colonies (and, later, states). For this reason, he argues, it is possible to identify particular ethnic cultural influences and ensuing social formations that heretofore have been considered unrecoverable. Using sources pertaining to the African continent as well as runaway slave advertisements, ex-slave narratives, and folklore, Gomez reveals concrete and specific links between particular African populations and their North American progeny, thereby shedding new light on subsequent African American social formation.” – UNC Press

Katherine McKittrick, and Clyde Woods, eds. Black Geographies and the Politics of Place. Toronto: Between the Lines Press and NY: South End Press, 2007.

“Black Geographies is an interdisciplinary collection of essays in black geographic theory. Fourteen authors address specific geographic sites and develop their geopolitical relevance with regards to race, uneven geographies, and resistance. Multi-faceted and erudite, Black Geographies brings into focus the politics of place that black subjects, communities, and philosophers inhabit. Highlights include essays on the African diaspora and its interaction with citizenship and nationalism, critical readings of the blues and hip-hop, and thorough deconstructions of Nova Scotian and British Columbian black topography. Drawing on historical, contemporary, and theoretical black geographies from the USA, the Caribbean, and Canada, these essays provide an exploration of past and present black spatial theories and experiences.” – BTL Press

Marlene NourbeSe Philip, A Genealogy of Resistance: And Other Essays. Mercury Press, 1997.

“I WEEP FOR THIS GAUNT RED WOMAN with the dread hair who, without much formal education, understood the workings of capital and empires. Who was pissed to hell that the product of her labours, her beloved cocoa, could only fetch one cent per pound. I weep for her. And I sing. For her… I feel her anger all these years after her death. Know her anger. Own it as my own. And hers, .. In knowing her anger I know that she is kin. In ways more powerful than blood. .. Oh, but I will give an account of descent from ancestors. I am neither alone. Nor mutant, Not a changeling. The current of resistance runs swift, runs deep, weaving its way through the genealogy of these people lurking in the half shadows…” – M. NourbeSe Philip, “A Genealogy of Resistance” (1997)

“Between 1730 and 1750, powerful healer and vodun priest Domingos Álvares traversed the colonial Atlantic world like few Africans of his time–from Africa to South America to Europe–addressing the profound alienation of warfare, capitalism, and the African slave trade through the language of health and healing. In Domingos Álvares, African Healing, and the Intellectual History of the Atlantic World, James H. Sweet finds dramatic means for unfolding a history of the eighteenth-century Atlantic world in which healing, religion, kinship, and political subversion were intimately connected.”  – UNC Press