For me, as for many children of the 1980s, the recent death of Phife Dawg of A Tribe Called Quest triggered a wave of nostalgia for the “conscious” hip hop of the 1990s, a genre that blended playful, jazz-inflected lyrics with potent themes of black resistance and solidarity. My memories of that cultural moment are inseparable from the larger political currents of the day. For if the late 80s and early 90s witnessed a golden age of rap, they also produced a remarkably fertile renaissance of black nationalism. During that era of street corner Egyptology, being “too black, too strong” was a manifest virtue. Undergrads and autodidacts alike stocked their bookshelves with the classic offerings of Carter G. Woodson (The Mis-education of the Negro) and George James (Stolen Legacy).

At the center of this awakening was my generation’s rediscovery of Malcolm X. Malcolm, the patron saint of Black Power, proved equally valuable as the muse for young hip-hop intellectuals. The Malcolm revival of the 1990s (a phenomenon vindicated and amplified by Spike Lee’s 1992 biopic of the late leader) was in part a response to the bankrupt politics of accommodationism practiced by much of the black establishment in the post-civil rights era. Reeling from bipartisan assaults on cities and the working-class, and deeply alienated from the failed policies of liberal reform, a new generation of malcontents embraced Malcolm’s withering critique. 1

Only Malcolm seemed capable of speaking our truths. With Martin Luther King, Jr. reduced to an innocuous symbol of American exceptionalism, and figures like Paul Robeson and Claudia Jones lost to the receding mist of the Cold War, we needed a voice of uncompromising militancy, a standard-bearer for our “no sellout” philosophy. Malcolm’s radicalism steeled us and helped us confront the anemia of “multiculturalism” and the devastation of mass imprisonment, police brutality, and virtually unrestrained corporate capitalism. Granted, our reclamation of the martyr was far from perfect. Much of contemporary “Malcolmology” was unabashedly patriarchal and homophobic. Focused on a simplistic rejection of white supremacy, we mostly overlooked Malcolm’s internationalism, anti-imperialism, and nascent anti-capitalism. Yet neo-Malcolmite nationalism profoundly shaped our worldview, arming us with oppositional consciousness and providing a feasible alternative to the bourgeois integrationism of black elites. 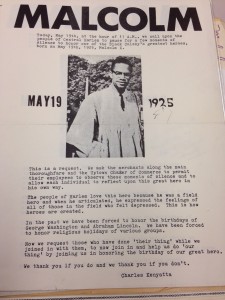 What we failed to recognize in the 90s as we came of age politically was the long prehistory to our Malcolm resurrection. Practically from the moment of the leader’s February 1965 assassination, an assortment of Malcolm enthusiasts and admirers had struggled, often amid harsh social conditions and the open hostility of ideological adversaries, to preserve the cultural memory of their hero. Malcolm was a world figure, and he was memorialized in communities across the globe. During the 1970s and 80s, however, some of his most meaningful commemorations occurred in the urban African-American enclaves for which he had lived and died.

Many of these activities took place in Harlem. It was there, in the early aftermath of “Brother Malcolm’s” death, that some of the leader’s most devout followers attempted to regroup and make sense of their loss. Local organizations like the “Malcolm X Inquiry Committee” called for a full and thorough investigation into the circumstances of the assassination, rallying under the slogan “Harlem wants to know!” Determined to organize as well as mourn, a number of black groups began the painstaking work of recuperating Malcolm’s political legacy. They operated under bleak circumstances, especially as the 1970s economy spiraled, the dope trade supplanted the insurrectionary politics of the street, and the forces of reaction waged a sustained counterassault on mass black movements. These realities only increased the determination of Malcolm devotees to raise the martyr’s name, thereby bolstering the militancy and morale they felt was necessary to endure an extended period of retrenchment. 2

Malcolmites in Harlem and across the country labored to establish May 19, Malcolm’s birthday, as a “national black holiday.” This was to be a “people’s holiday” rather than an occasion “given or approved by the white power structure.” (The distinction grew clearer after 1983, as the launching of the official Martin Luther King, Jr. holiday hastened King’s posthumous appropriation by business interests and the right.) Affirming the principle that black people must honor their own heroes, an eclectic collection of black nationalists, Pan Africanists, Muslims, and everyday workers participated in grassroots May 19 tributes. A reconstituted Organization of Afro-American Unity (OAAU), the formation that had housed Malcolm’s secular recruits in the final months of his life, arranged annual pilgrimages from Central Harlem to Malcolm’s Hartsdale, New York, grave site. Perhaps the most important activity undertaken by the OAAU under the direction of Ella Collins, Malcolm’s sister, the processions drew the support and participation of students, black dignitaries, the Republic of New Africa, and Harlem’s Yoruba Temple. “Let this ralley [sic] be a public demonstration that black people are tired of the old ways and are ready to make a change by whatever means necessary,” organizers of the 1971 pilgrimage declared. 3 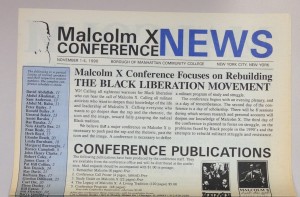 Other informal observances of “Malcolm X Day” occurred in black secondary schools, community colleges, cultural centers, and parks. In Harlem these services were faithfully covered by black publications like Big Red News and the Amsterdam News. “The press, the white press, has not kept Malcolm’s memory alive,” one Brooklyn resident charged in a 1973 letter to the latter newspaper. “The white-dominated schools will not plan special programs for Malcolm, nor teach our children of his exploits.” Though Malcolm memorials often featured solemn pledges and the flying of red, black, and green flags, most were devoted less to sentiment and reminiscence than to rekindling the spirit of struggle. Celebrants in New York were urged to honor May 19 by “taking the day and working for black liberation.” 4

Of course, many Malcolm tributes were overtly masculinist. Such affairs reinforced the premise that the main reason for saluting Malcolm was to inspire black men to “stand up” and assume their “natural” roles as warriors and heads of household. The Chicago-based Malcolm X Black Hand Society of the World issued an annual “Malcolm X Black Manhood Award” to figures “who have distinguished themselves in the passionate pursuit of unconditional liberation.” (Recipients included Kwame Nkrumah of Ghana and Sekou Toure of Guinea.) Commemorators regularly cited Malcolm’s masculine valor as one of the late leader’s greatest bequests. “You want my opinion?” Ella Collins asked a throng of black men during a 1970 rite at Malcolm’s grave. “You’re still boys. Learn to do something positive for a change. Don’t let him die in vain.” A similar message was conveyed at the event in a passage read aloud from the Black Panther Party newspaper: “History has shown us that for the black liberation struggle, it’s definitely time to ‘get guns and be men.” 5

A key turning point in the memorialization of Malcolm came in 1990, the 25th anniversary of the leader’s death. That year witnessed a host of tributes, including international conferences in Cuba and the U.S. The highlight of the revival was “Malcolm X: Radical Tradition and a Legacy of Struggle,” a major summit convened at New York City’s Borough of Manhattan Community College. The event consummated years of grassroots efforts to hold aloft Malcolm’s flame. Activists, artists, scholars, and hundreds of young people gathered to contemplate the martyr’s enduring political relevance. They met under the shadow of reaction. Unemployment, urban disinvestment, and the criminalization of black youth had intensified during the long nightmare of Reaganism. Global capital stood triumphant, reveling in its victory over degraded versions of socialism and eager to consolidate its hegemony through war in the Persian Gulf. Amid these crises, an extraordinary assemblage of Malcolm devotees undertook one of the most comprehensive appraisals of “the brother’s” life to date.

Ideological diversity marked the affair. Organizers of the conference, including veteran scholar-activist Abdul Alkalimat, took an ecumenical approach, hoping to avoid the sectarianism that had marred other Malcolm occasions. Every major progressive or radical tendency in black America was represented, from revolutionary nationalism to Marxism and feminism. Among the 3,000 participants were activist-intellectuals John Henrik Clarke, Amiri Baraka, and Barbara Ransby, as well as Malcolm’s widow Betty Shabazz, Roots author Alex Haley, civil rights attorney Conrad Lynn, labor advocates Bill Fletcher and General Baker, and former Malcolm associates Vicki Garvin and Alice Windom. Also present were Preston Wilcox of the Malcolm X Lovers Network, Elombe Brath of the Patrice Lumumba Coalition, and other figures who had orchestrated Malcolm celebrations in those brittle years when the late leader’s legacy remained shrouded in historical amnesia and contempt. 6

Conference planners presented the three-day gathering as an opportunity to move “beyond rap and rhetoric” and revitalize the liberation struggle. Yet it was the summit’s political content—not just its seriousness or scope—that distinguished the occasion. The visible participation of trade unionists, socialists, and Malcolm comrades such as Yuri Kochiyama, the Japanese-American human rights activist, reflected a conscious attempt by organizers to transcend the narrow racialism and religious dogma that had shaped many previous commemorations. Malcolm’s global reach was evident, with conference attendees hailing from more than 25 countries and several Caribbean and African panelists offering perspectives from the nonaligned world. As Zanzibar revolutionary Abdul Rahman Babu noted during one session, “Malcolm had the vision to see the threat that a united Third World would pose to imperialism.” 7 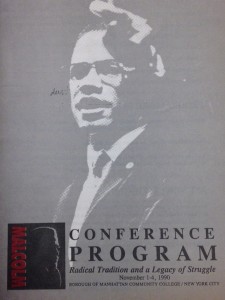 “Radical Tradition and a Legacy of Struggle” also represented a tentative departure from the patriarchy and heterosexism of previous Malcolm fetes. Some of the leading black feminists of the day appeared on panels, including Frances Beale, bell hooks, and Linda Burnham. Their presence hardly indicated a complete break from sexism. “Among many of the women present at the conference there was a widespread sentiment that women were not adequately represented in the major plenaries and that the absence of women’s participation central to the conference planning process was manifest,” Beale and Burnham later recalled. However, the involvement of feminists ensured that the casual equation of Malcolm and manhood did not go unchallenged, and that discussions of welfare, abortion rights, and sexual abuse within black communities were part of the proceedings. 8

“Radical Tradition and a Legacy of Struggle” set a new standard not only for Malcolm tributes, but also for practical cooperation among the various ideological persuasions that continue to identify with the late leader. Indeed, the conference helped strengthen the alliances that birthed the short-lived but important Black Radical Congress in 1998. In more recent years, chants of “unapologetically black!” by queer activists and other young demonstrators have signaled a new generation’s embrace of self-determination and audacious blackness, principles that Malcolm embodied. The political sophistication of these organizers has already surpassed the preoccupation with sloganism and iconography that characterized the Malcolmology of my adolescence. This May 19, as admirers in many communities remember Malcolm, we ought to also recognize that commemoration is always an act of political remaking. And we should recall those Malcolmites who strove through the years to replace machismo with dialectics, to combat provincialism, and to rejuvenate and refine our radical tradition.

*The author wishes to thank activist-intellectual Bill Fletcher for helping him understand the significance of “Malcolm X: Radical Tradition and a Legacy of Struggle,” the 1990 conference.

Comments on “The Roots of “Malcolmology””