This is a guest post by Lisa Tomlinson, a Jamaican researcher and scholar residing in Kingston, Jamaica. Her area of specialization include literary and cultural studies of the Caribbean and African diaspora, Black literary criticism and anti-colonial studies. She holds a degree in English Literature from Carleton University and a PhD in Humanities (Comparative Perspective and Culture) with a graduate diploma in Latin America and Caribbean Studies.

Lisa has worked in tertiary institutions in Ontario, Canada where she taught courses in English literature, humanities, and visual culture. She is currently a lecturer at the University of the West Indies, Mona Campus in the Department of Literatures in English. Some of her publications include book chapters in Jamaicans in the Canadian Experience: A Multicultralizing Presence, Archipelagos of Sound: Transnational Caribbeanities: Women and Music, Critical Insights: Harlem Renaissance, as well as encyclopedia entries in the Dictionary of Afro-Latin American and Caribbean Biography.

“The child using books which upheld the glory of Empire grew to manhood and womanhood knowing nothing and caring less for the land of his forefathers, Africa and the race to which he belonged. Duty to one’s own country and people should be taught before duty to an Empire that took little interest in their children. They grew up with identity complex…” 1 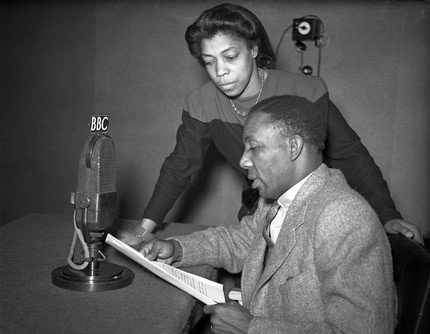 Una Marson was born on May 5, 1905 in the rural parish of St. Elizabeth, Jamaica, sixteen years after the novelist and poet Claude McKay. Following in the literary footsteps of McKay, Marson valorized African working-class cultural aesthetics and engaged with the wider African diaspora through her literary and political work. Although her work has not received the same attention or accolades as her fellow countryman Claude McKay, Marson has, without a doubt, made a significant contribution to Caribbean and diasporic literature. She was certainly a key figure in twentieth century black internationalist politics.

Fortunately, conversations around the life and work of Una Marson have been kept alive and archived in a few libraries throughout the world. Writers such as Erika Smilowitz, Honor Ford Smith, and Alison Donnell have also written critical essays on Marson’s literary and political involvement inside and outside of Jamaica. Additionally, her biographer Delia Jarrett-Macauley has provided a comprehensive documentation of Marson’s life and writing. Therefore, their works are most instructive in offering more information concerning Marson’s life and activism.

Not surprisingly, Marson’s early works of literature reflected her colonial education. Marson’s writing in her first collection of poems, Tropic Reveries (1930) and Heights and Depth (1931), adapted traditional European literary structure and spoke to pastoral style poetry. As her travels abroad strengthened her race consciousness in the mid-1930s, Marson’s literary work departed from the conventions of British Victorian and Romantic literature. As such, her third volume of poems, The Moth and the Star (1937), articulated themes that resonated with the experiences of African women entrapped within received notions of white beauty standards.

In her poem “Cinema eyes,” for example, the narrator tries to protect her daughter from procuring a “cinema mind” under the influence of white supremacy, which “saw no beauty in black faces.” Two other poems, “Kinky hair blues” and “Black is Fancy,” reveal black hair politics and many black women’s desire to alter their physical appearances:

But I’ll be alone

Over time, Marson’s work also became more rooted in Jamaican experiences, and she integrated the indigenous culture of the black Jamaican working-class. In her poem “Stone Breaker, ”Marson sheds light on the experiences of black working-class Jamaican women using the native language, Jamaican, to express class and racial inequalities that inform life on the island: “De big backra car dem/ A lik up de dus’ in a we face” 3

Maintaining a bond to her Jamaican roots, “Quashie Comes to London,” a more lighthearted poem, highlights the immigrant experience of homesickness in the metropolis of London. Quashie’s diasporic journey in cold dreary London and yearning for familiar food items such as “some ripe breadfruit / Some fresh ackee and saltfish too / An’dumpins hot will suit,” later becomes common threads in the works of Caribbean diasporic writers living outside of the region.

Marson further developed her use of African Jamaican cultural aesthetics and experiences in her popular plays, London Calling and Pocomania. In Pocomania, for instance, she includes the local vernacular, folklore, and African-centered religious practice called Pocomania to challenge middle-class respectability and Christianity. She does this through Stella, the middle-class character in the play, who journeys to the world of the black Jamaican working-class in a bid to experience the forbidden religious rituals of Pocomania. Given the fact that the reference to anything “African” was frowned upon in colonial Jamaica, Marson’s plays and poems reflected a transgressive intervention in conventional Jamaican literature.

In many ways, Marson unselfishly employed her literary status to foster and build upon the development of a Caribbean literary canon. In her desire to advance Jamaican literature and culture, Marson formed the Writers Club, the Kingston Drama Club, and the Poetry League during the 1930s. Marson was also responsible for starting a publishing press. 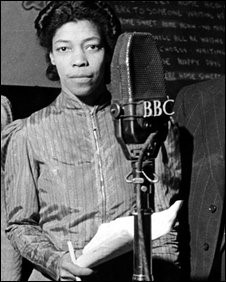 While living in England, Marson developed the BBC radio program, “Caribbean Voices,” which evolved into a significant literary show, one that would have a crucial impact on the development of new writings and writers from the Anglophone Caribbean. Caribbean cultural luminaire Kamau Braithwaite has characterized the forum as the “single most important literary catalyst for Caribbean creative and critical writing in English.” 4

In addition to her literary engagement, Marson was also very politically active in local and international affairs. In 1928, at the age of 23, she became the first woman in Jamaica to own and edit a magazine, The Cosmopolitan. Marson used this publication as an outlet to express social concerns in Jamaica (i.e., race and class prejudices) and also to address gender issues. In her editorials, Marson consistently advocated for the expansion of educational and employment opportunities, the development of women’s self-help groups, and the granting of women’s suffrage.

As a feminist, Marson worked in various overseas women organizations and was the only black woman to attend the 12th Annual Congress of the International Alliance of Women for Suffrage and Equal Citizenship conference in Istanbul, Turkey in 1935. Motivated by wider diasporic experiences, she used the opportunity to advocate for the rights of black woman globally and called on the conference to recognize African women in their daily struggles.

Coupled with her feminist work, Pan-Africanism became a dominant feature of Marson’s activism. Marson’s Pan-Africanist vision, for example, was invested in the need for educational reform on her island, a reform that would reverse the colonial education to which she was subjected and instead teach Jamaican children about their African past. Equally, Marson worked as a secretary for the Ethiopian emperor, Haile Selassie, where she used this position to highlight the separation of families and Italian atrocities against women and children in Ethiopia. As his private secretary, Marson also accompanied him to Geneva where he pleaded his country’s case to the League of Nations on the matter of the Italian invasion and occupation.

Marson’s last years of political activism focused on advocacy for the Rastafarian community in her native Jamaica, where she successfully established a home for Rastafarians. She also created the Save the Children Fund, an organization that helped to fund poor children’s basic education.

According to published sources and acquaintances, Marson’s extensive work and travels later contributed to her frail health. Marson struggled with depression and was hospitalized several times in mental health facilities before she died of a heart attack in Jamaica in 1965.

Like Claude McKay, Una Marson’s literary and political work emerged out of their native country Jamaica and later became a part of a wider community of diasporic Africans who sought to assert a distinct national voice and identity. Both writers combined their work with the indigenous cultural expression of the island but were also open to bridging the conversation with other black art forms as evident in the jazz poems of Marson and her brief experimentation with the African American vernacular.

Unlike McKay, however, Marson remained in Jamaica to witness the fruition of her goal toward a cultural and literary renaissance. The 1950s and 1960s defined a literary and cultural rebirth for Anglophone Caribbean people as seen in the dramatic growth in the number of artists, musicians, and creative writers working regionally and internationally. Writers such as Jamaican Andrew Salkey, Barbadian George Lamming, and Trinidadian Samuel Selvon all began to make their mark as renowned Caribbean writers and cultural activists in various parts of the globe.

Therefore, Marson’s commitment to gender politics, race, class, and her impulse to divert from British literary style shaped a generation of writers who aspired to attain cultural and political sovereignty. Indeed, Marson belongs to a long line of black internationalist intellectuals and activists, whose works have been fundamental to struggles for cultural assertion and self-hood.