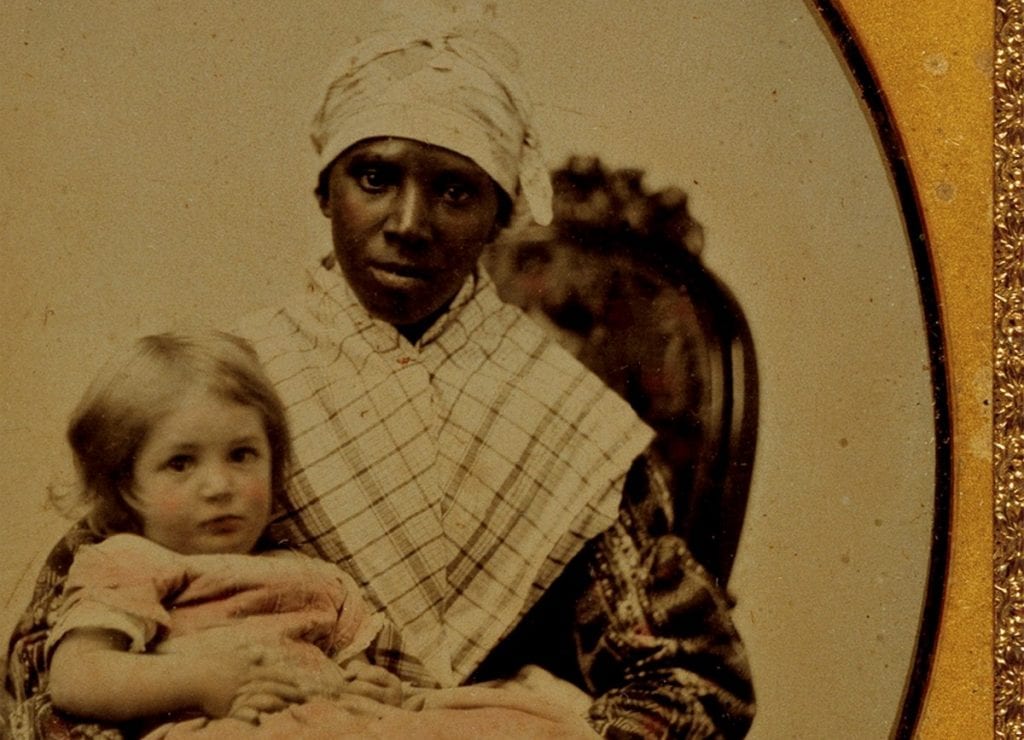 Speaking to a Washington Post reporter recently, attorney Ben Crump (who represents the families of Ahmaud Arbery, Breonna Taylor, Sean Reed, and George Floyd) had a few things to say about the visual documentation of racist violence. According to Crump, cell phone recordings of the killings of Floyd, Arbery, and Reed have been transformational. They are “ocular proof that black people weren’t lying, that police were brutalizing them,” said Crump. The footage of Floyd’s murder, Crump continued, “is a documentary of his death narrated by him.” Indeed, it is the testifying nature of these images—and more particularly the testimony of the people murdered—that gives them social currency and political power. With the ubiquity of digital cameras in the twenty-first century—96% of Americans own some kind of cell phone—the importance of visual evidence in the fight against racial injustice is clear. With digital footage, Crump insists “we are changing the narrative.”

In fact, since the earliest days of photography, those on all sides of the debate have sought to shape narratives about race in the U.S. Enslavers used photographs of enslaved people to profess benevolence and later to fuel their nostalgia for human bondage. But if photography was a tool for oppressors, it was also adopted by people fighting racial oppression and injustice. The medium was as vital to the antislavery campaigns of abolitionists as it was to white supremacists defending slavery. Enslaved and freedpeople, too, used photography to fashion their self-image and connect and restore their families separated by sale. Hence, both practitioners of racism and those fighting for freedom and racial equality have long relied upon photography as a source of power—a means to argue, represent, and resist.

Matthew Fox-Amato’s Exposing Slavery: Photography, Human Bondage, and the Birth of Modern Visual Politics in America (2019) considers photography’s place at the root of the battle over slavery before, during, and after the Civil War. In daguerreotypes, tintypes, and stereoscopes defending, opposing, rejecting, and remembering the enslavement of Black people in the United States—“slavery produced a key element of modern political culture” (p. 13). Art historians and other scholars have emphasized the Civil War’s confluence with the democratization of photography. But as Fox-Amato points out, a focus on the Civil War alone fails to capture the earlier development in the 1840s and 1850s of a visual grammar of white authority shared by white people on both sides of the slavery issue. Simultaneously, enslaved people and fugitives from slavery such as Frederick Douglass used photography as a means of self-presentation and communication with kinfolk from whom they had been separated by sale or flight. When illustrated newspapers, such as Frank Leslie’s and Harper’s Weekly, arrived in the mid-1850s, photographers’ studios had been active—from New York to New Orleans—for at least a decade. By the start of the Civil War, photography was “a common cultural ground between North and South” (p. 3), according to Fox-Amato.

Enslavers, for instance, quickly adapted their arguments for the benevolence of slavery to the new medium. One common photographic motif the author terms “chattel Madonnas” (p. 45), featured an enslaved woman with a white child in her lap. Enslavers took pride in displaying their children in the arms of the enslaved women forced to care for them. Fox-Amato argues that with the medium of photography, enslavers found yet another way—as with fugitive slave advertisements and violence—to “police the personhood” (p. 18) of enslaved people.

The decreasing cost and widening availability of photographers’ studios, however, meant that elite and middle-class Whites did not have a monopoly on the medium.

Enslaved people working on steamships, in ports, and in towns and cities in the South where multiple studios plied for business, witnessed the rising popularity of portrait photography. Historians and archaeologists have known for some time that enslaved people could also be independent consumers with money earned from being hired out, selling handicrafts, or cultivating garden plots. Less was known, however, about their ability to procure a photograph of themselves. 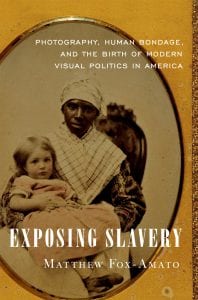 According to Fox-Amato, there is evidence that enslaved people visited photographers’ galleries, commissioned portraits, and mailed images of themselves to friends and relatives. Fox-Amato finds compelling traces in the archives suggesting that enslaved people subverted enslavers’ attempts to “police” their personhood by commissioning their own likenesses. Rare letters mentioning the exchange of portraits, the narratives of formerly enslaved people, and photographers’ record books all provide telling evidence. One itinerant photographer in Virginia recalled that he “reserved every Friday afternoon for colored people” and “published that slaves would be taken for fifty cents less than others, this made me very popular with them, they came in droves to see me on their day” (p. 77). An enslaved woman in Texas sent a letter asking for a photograph of her free daughter, Louisa Picquet, in Cincinnati. She wrote, “I want you to hav your ambrotype taken also your children and send them to me I would give this world to see you and my little sweet children.” Although this sort of evidence is not plentiful, such sources suggest, according to Fox-Amato, that sharing photographs across distances “gave slaves a new form of cultural mobility.” (p. 87).

The use of photography by abolitionists may be the most familiar intersection of slavery and photographic technology. By the 1860s, they could cheaply reproduce images on small cards, or cartes-de-visite. The most well-known example, perhaps, is the photograph titled The Scourged Back, of Gordon (aka Peter) taken after his escape to Union lines in Louisiana. Gordon’s back was to the camera, displaying thick scars left from a severe lashing by an enslaver.

Fox-Amato poses the question of why abolitionists did not use such photographs more often as a rhetorical weapon. In the complex psychology of abolitionism before the war, the aim of speakers and writers such as Frederick Douglass and Sojourner Truth was to assert their personhood before Northern audiences and refute their chattel status by putting their suffering in the past. The many photographic portraits Douglass commissioned of himself “staked claims to his personhood, his stance as a fugitive dissenter and the potential for African Americans as prosperous and productive participants in northern life” (p. 124). From the work of Nell Painter, we know that Sojourner Truth, too, staged her portraits to emphasize her upright, grandmotherly wisdom. With little control over his self-presentation, Gordon did not get to decide how to narrate his own story. Douglass and Truth, however, could speak for themselves through the camera’s lens.

In a final chapter, “Domesticating Freedom,” the author considers “interracial photography” commissioned by military men during the Civil War. He argues that these images illustrate the visual tropes of White dominance easily embraced by both White Northern soldiers and their Confederate counterparts. Echoing domestic scenes, Union military men and photographers staged a hierarchical vision of post-emancipation society, one in which “affectionate” and obedient Black servants attended their White liberators. Photographer Alexander Gardner’s photograph at Aquia Creek Landing, Virginia, in 1863, for example, depicted a group of White men gathered in a railroad depot with all of them facing the camera. At their feet was a Black man, sitting with legs folded, offering one of the men a cup of tea.

Confederate monument supporters today claim that the removal of statues is an “erasure” of the past, but they need not worry. The archives are full of thousands of tiny monuments to the enslavement of human beings, the way of life it afforded White Americans, and the legacies it left behind. Consider the portrait of two young, unnamed sisters reproduced by Fox-Amato. The image might seem, at first glance, to be a family photograph. But the handwriting on the back conveyed a sinister message. It read: “[t]wo slave girls given Aunt Harriet by her mother when she married” (p. 226). Curators of early photography will tell you that such inscriptions, sometimes made by a descendant years later, are often inaccurate. Regardless, the writer reminisced about a White family’s ownership of the two girls and preserved that story in the family archive.

Fox-Amato’s work offers us an important backstory to the history of race and photography in the United States and gives tantalizing clues about enslaved people’s use of photographic images to communicate with one another. He might have included more images of self-fashioned photographs of free, freed, and enslaved people of color included here, as difficult as they can be to fully identify. 1 These would deepen some of the author’s points about the value of photography to Black families. I’m also reminded of a portrait at the Library of Congress of an unidentified Black Union soldier, seated in uniform, brandishing a pistol across his chest. The man expressed his opposition to slavery and racial oppression through a photograph. Like today’s activists, he sought to change the narrative.

Mary Niall Mitchell is Ethel & Herman L. Midlo Chair in New Orleans Studies, Joseph Tregle Professor in Early American History, and Associate Professor of History at the University of New Orleans where she co-directs the Midlo Center for New Orleans Studies. She is the author of Raising Freedom's Child: Black Children and Visions of the Future after Slavery (NYU Press, 2008). Her latest book, Girl in the Frame, is a study of race, photography, slavery and memory in the nineteenth century. Prof. Mitchell is one of three lead historians for Freedomonthemove.org, a collaborative database of fugitive slave advertisements housed at Cornell.

Comments on “The Visual Documentation of Racist Violence in America”