Can academic philosophy be a resource for understanding and enriching African American life? A growing contingent of students and scholars hope to answer this question in the affirmative, and our professional and vocational lives depend on the availability of this answer. But for many, it can be difficult to remember why this sometimes seems like a sensible bet.

If you are wondering why this is even a question, why the bet might not pay off, then you should read this article on diversifying graduate study in philosophy. Then read Kristie Dotson’s article “How Is This Paper Philosophy?” And then read chapter three of Cornel West’s Prophesy Deliverance! Then talk to some old heads, such as Anita Allen, Lucius Outlaw, or Leonard Harris.

The good news is that every now and then someone reminds us of the prospects for Black philosophy. In the last few years, many of those reminders have come from the inestimable Charles Mills, who has discussed “the project of unwhitening mainstream political philosophy.” One of the scholars Mills cites as a co-worker on this project, Tommie Shelby, provides another reminder in the form of his remarkable new book Dark Ghettos: Injustice, Dissent, and Reform.

For readers of Shelby’s first book, We Who Are Dark, this new one may be familiar in some ways, yet profoundly different in others. Both books are masterful exercises in ethical inquiry and social theory, and both provocatively inhabit the space where African American intellectual traditions overlap with political theory and philosophical reflection. The first book sought to refine broadly philosophical ideas — drawn both from high theory, in philosophy and Africana thought, as well as from expressive culture and vernacular reflection — about racial solidarity, Black nationalism, and related topics. Dark Ghettos, in contrast, engages philosophical assumptions that animate and, Shelby claims, undermine our attempts to engage in policymaking and social criticism relating to disadvantaged, disproportionately Black and brown urban neighborhoods.

A central concern of Shelby’s book is that mainstream public discourse and policy debates examine these neighborhoods through a limited and limiting conceptual lens. We typically follow the Moynihan Report in adopting what Shelby calls “the medical model,” which treats these neighborhoods as broken systems simply in need of an intervention, like a diseased body awaiting a doctor’s ministrations. The issue with this approach is that the normative and political-theoretic dimensions of the problem too easily drop out, giving way to putatively dispositive appeals to the empirical. Areas of concentrated disadvantage are not infections in a body that needs an antibiotic, Shelby argues. They are more like patterned occurrences of the disease that results from the morally indefensible dumping of toxic waste. (Shelby doesn’t pursue the metaphor to this length, but I trust he’d accept this as a friendly amendment.) That is to say, these challenged neighborhoods are the consequences and markers of systemically unjust social arrangements.

Choosing a medical model over a systemic injustice model makes a considerable difference in the way we think about what is possible and what is permissible for people in and around the ghetto. To put it bluntly, the medical model suggests that things are basically fine. It can therefore recommend targeted interventions — school vouchers, marriage promotion policies, welfare-to-work initiatives — because the basic structure of society is acceptable as it stands. According to this model, there is no need for broader restructuring, no need to uproot anything or engage in any far-reaching questioning of our ideas about whose perspectives, life plans, and well-being matter.

A second implication of the medical model is that it renders unintelligible a great many actions that question the thought that society is fine as it stands. Behaviors that might be read as protest, or dissent, or in some other way as barometers of or complaints about systemic social injustice — for example, behaviors manifesting indifference to the prospect of precarious dead-end employment, or behaviors expressing, in word or deed, doubt about the legitimacy of sovereign commands — are instead read as pathology, laziness, or inherent criminality.

In rejecting the medical model in favor of a systemic injustice model, Shelby follows in the footsteps of the book that inspired his title: Kenneth Clark’s Dark Ghetto. Clark’s book appeared in the same year as the Moynihan report and shares some of the report’s limitations, but Clark never loses sight of the centrality of normative judgment and philosophical reflection to questions of social amelioration.

Shelby might have framed this insistence on the philosophical and normative dimensions of his topic in slightly different language. He might have worried about the conflation of means and ends, or about the reduction of moral reflection or the making of social meaning. But those methods draw on meta-philosophical analyses rather distant from the ones that have enabled Shelby’s scholarly journey. Shelby is a political philosopher in the analytic tradition, meaning that characters like John Rawls — rather than Achille Mbembe or Sylvia Wynter — provide his basic theoretical vocabulary. (It is not inconsequential that he describes his project as an exercise in Black radical egalitarianism or in Black radical liberalism.)

I point out Shelby’s meta-philosophical commitments not to criticize him but to clarify the nature and location of his intervention. Whatever else is true of analytic philosophers, we have, generally, an extremely high tolerance for digging into the weeds of arguments. This can be vexing, especially when the stakes are high and the problem is not the weeds but the layout of the garden (or the advisability of gardening at all). But it can also be useful, especially in the hands of a thinker whose active cultivation of scholarly double-consciousness enables him to remain perfectly clear about the stakes at hand. 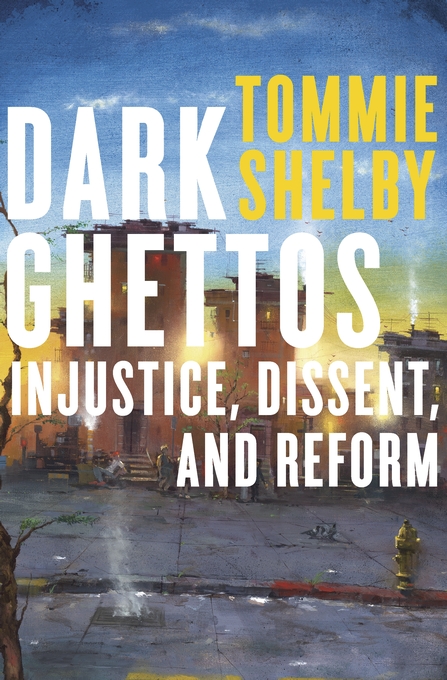 Shelby is such a thinker, as we can see from the patience and meticulousness with which he engages the ideas that dominate public discussions of disadvantaged urban neighborhoods in the US. These discussions have similar features wherever they occur, whether on the bus, on MSNBC, in the meeting rooms of putatively liberal foundations, or in the halls of the US Congress. They begin with a bewildering variety of philosophical assumptions that they mistake for gospel truth, assumptions about what dissent looks like and whose perspectives matter in a democracy and where sober reform shades into lunacy. Then they mix facts and data with these assumptions to motivate clusters of policy recommendations that collectively represent the only sensible way to solve the Negro Prob– excuse me: the urban problem.

All this leaves the dissenter with a dilemma. Take up the crushing burden of explaining to the denizens of Flatland that no, there really is a third dimension that they are just not seeing. (The explanation might sound like this: No, really, think about it: wouldn’t you choose to gamble on success in an informal economy if subsistence-level, service industry tedium was the clearest alternative? Couldn’t that be a rational choice rather than simple laziness, stupidity, or anti-social deviance?) Or the dissenter could find some less maddening way to spend the time.

One less maddening option involves finding other people to talk to. This is one way to go: stationing oneself outside the Overton window of viable policy choices in the world as it stands and working to pull the window open wider until it reveals new vistas. But for those who remain on the inside, insisting on trying to contest what Albert Murray would have called the “social science fictions” that inform our political and policy discourse, Dark Ghettos is an invaluable resource.

If you have ever bristled at discussions of marriage promotion strategies, the cultural roots of urban poverty, or the pointlessness of so-called political rap, only to decide that the real disagreement was buried too far under too many myths about Black humanity or assumptions about fairness and justice to unravel in one lifetime, then this book is for you. For anyone who hopes to engage productively with the assumptions and claims circulating among our most influential policymakers and “thought leaders,” this book represents philosophy at its most helpful and edifying.

Paul C. Taylor is Associate Dean for Undergraduate Studies in the College of the Liberal Arts and Professor of Philosophy and African American Studies at The Pennsylvania State University. He specializes in social philosophy, aesthetics, Africana thought, pragmatism, and race theory, and has published three books, five edited volumes, and a number of articles and book chapters in these areas. Follow him on Twitter @pcttwo.