I’m listening to jazz as I write this review. This was an intentional decision as I felt Therí Alyce Pickens’s Black Madness :: Mad Blackness gave me the same feeling hearing jazz gives me as I read it. Difficult but pleasant, the result of a mastery of rules that can now be broken for the benefit of the reader/listener. To say I enjoyed reading Black Madness :: Mad Blackness is an understatement. Reading this text allowed me to experience the titillating delight of wading through theory, through discourse, that I felt I had finally experienced what Michel Foucault calls the “‘pleasure of analysis.’”1

On its face, Black Madness :: Mad Blackness does not seem like the kind of text to evoke such warm feelings from a reader but Pickens’ expert wielding of theoretical concepts and precise prose made for an unusually whimsical read of a scholarly work. The deft monograph clocks in at a mere 114 pages and is structured not with chapters but four conversations. Conversations One and Two ask readers to consider either side of the titular double colon respectively, while Conversations Three and Four take us into the realm of “abandoning the human” and “not making meaning, not making since (the end of time).” Clever, right?

At the outset, Pickens alerts readers that we are in second book country, effectively freeing herself from expectations of first book formality. She writes, “my aim is not to trace an idea or prove an argument, but rather to open up two fields to each other”( x). Pickens is an associate professor of English at Bates College and a foundational scholar in the burgeoning field of Black disability studies. She successfully mobilizes sci-fi and other literatures not as case studies but as fodder to generate a set of conversations about the multiple relationships ability and Blackness have with one another. For Pickens, “Black madness and mad Blackness are not interchangeable or reciprocal” (3). Pickens goes on to eschew a hope that either formulation will necessarily mean emancipation or radicality for those interpellated by either frame. In her own words, this “wayward” text attends to previously unarticulated concerns about the way that anti-Blackness and sanism shape our world. 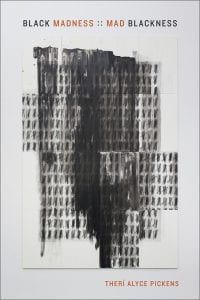 The double colon of the title is part of her intervention. She uses it not to connote a simile but in a way that “questions the grammars and assumptions that lie dormant in thinking of them as analogous […]”(6). In conversation one, “Making Black Madness,” Pickens uses afrofuturist author Octavia Butler’s work Fledgling to interrogate the assumption that Blackness and madness are co-constitutive. In Butler’s last published piece before she passed, the Black protagonist Shori relates to humans as well as her fellow white Ina (vampires) with rightful suspicion following a debilitating accident that gives her amnesia. Shori is outside of time, unable to remember the social reality from which she comes but totally dependent on these elusive mores to support her forward movement in her own community. She is unable to recoup her history, nor is she able to act independently of the world she has forgotten. This dependency belies a recuperative or an emancipatory scheme for Black madness and asks readers of Butler and subsequently Pickens to sit in the discomfort of a narrative that does not neatly lend itself to some sort of transformational relationship to the intersecting realities of Blackness and disability.

In Conversation Two, Pickens deploys Nalo Hopkinson’s Midnight Robber to meditate on mad Blackness in an intraracial context. In the alternate universe version of her home planet, protagonist Tan-Tan Habib struggles to make sense of her father’s murder at her own hands following years of rape and abuse. Pregnant with his child, Tan-Tan attempts to make a life in the interstitial spaces of this already marginal reality. Her tentative grasp on sanity mirrors her sister Quamina’s cognitive disability, which is also a marginalized reality within Hopkinson’s world(s) and ours. These “mad Black” sisters disrupt linearity and narrative by speaking and not speaking to their realities respectively, challenging the normative public discourse of the rest of the Afro-Caribbean descended people that inhabit their planet. The sisters’ stories, as well as those of Granny Nanny, the sentient AI that tacitly controls their world, offer Pickens a way of thinking through mad Blackness that again is neither simply liberatory nor antagonistic. Granny Nanny’s existence calls into question our understanding of humanity, as “she” expends creative power through her narration of events and her mental and physical embeddedness in humans. In other words, the mad Black Granny Nanny can probably pass the Turing test so what does that say about what it means to be human?

Mad blackness :: Black madness is what happens when you get to take the road less traveled with a professional driver or go deep into the weeds with an expert botanist. You may feel out of your depth, but you’re assured by the fact that your traveling companion is extremely knowledgeable. That said, I can’t say that I didn’t have moments of trepidation rounding curves and losing the trail. For all its explicit call for conversation, the language of this text does not make for easy conversation. Pickens’ vocabulary and exquisite use of English was at once awe-inspiring and mind-boggling. Did she really play with the words taint, colon, invagination, and intussusception throughout the text? Yes, she did, and she did that.

I found myself talking back to the book with each alluring line. In the preface, before we even encounter the text itself, Pickens writes,

This is the taint: the putatively unwanted, forgotten, ignored, or ugly space out of which something else can emerge. It is not one and it is not the other. Quite literally, the “not.” And, yet, it also exists as a space of beauty and darkness all its own. To name it, “call it the taint,” knowing it is illicit, strikes me as the primary conceit of this project: I name and call and write in the spirit of discussing not only what remains taboo but also pressing us to discuss it in ways that disrupt how we avoid the subject. Taint one. Taint the other. (xii).

Upon reading this passage, in the preface may I remind you, I wanted to give Pickens a slow clap. And this was not the only such passage that was such a scandalously enjoyable read. Like the text itself, I must forego a conclusion as it were. Pickens has called us all outside to play, to think deeply and without eventuality, to consider Blackness and madness – dare I say –irreverently, and we are all the better for it.

Moya Bailey is a scholar of critical race, feminist, and disability studies. Her work focuses on marginalized groups’ use of digital media to promote social justice as acts of self-affirmation and health promotion. She is interested in how race, gender, and sexuality are represented in media and medicine. She currently curates the #transformDH Tumblr initiative in Digital Humanities. She is also the digital alchemist for the Octavia E. Butler Legacy Network.