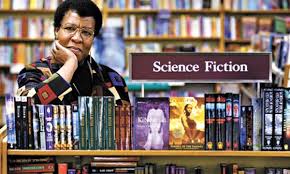 On February 26-28, 2016, the Octavia E. Butler Literary Society will host a conference at Spelman College commemorating the 10th anniversary of Octavia Butler’s death. Their celebration of Butler’s “letters, life and legacy” as one of the most esteemed (African) American science fiction writers is sure to bring together an incomparable collective of fans, scholars, and activists.

AAIHS blogger Jessica Marie Johnson has previously documented the resilience of Butler’s spirit in our modern world, and with particular reference to the remembrance of hurricane Katrina. Recent writings including the volume Octavia’s Brood: Science Fiction Stories from Social Justice Movements (2015) and well as the posthumous gift Unexpected Stories (2014) by Butler herself, reveal how Butler’s spirit continues to live among us long after her passing. I too have publicly spoken about my entry into Butler’s beautiful mind by way of teaching. In my course “Race, Gender, and the Alien Body: Octavia Butler’s Science Fiction,” I encourage my students to think critically about how Butler’s writings complicate modern understandings of “race,” “gender,” “alien,” and “body.”

As a genre, science fiction is a provocative means for exploring the history of these loaded terms while imagining potential uses for them in the future—uses that may in fact disrupt the concepts at their very core. Butler’s science fiction is well known for its use of “raced” bodies, for its construction of characters that contest conceptual norms, and for its deployment of themes that explicitly engage the complex relationships between race and gender. The themes and questions her works raise—which are central to Africana Studies and African American history—derive from her experiences as an African American woman. Butler’s literary imagination suggests that as future living beings navigate our worlds, we struggle with the ways past ideals of race and gender (in particular) haunt our contemporary existence.

I have wrestled with how Butler’s work can be engaged and taught by those beyond literary studies, and developed pedagogical strategies for teaching Butler in Africana Studies. I have also—alongside some particularly gifted students—grappled with Butler’s visions for the future and what her narratives of future worlds invariably suggest about the present. Deep down though, my love for Butler stems from how I am constantly seeking out spaces that allow us to envision and see black women anew and ideally, free from the stigma that renders our bodies as dangerous. It is through an intellectual and personal turn to Butler’s work—her stories, her warnings, and her imaginings—that I engage these concerns.

Yet, this claim does not go uncontested, for Butler uncannily dismantles her articulated disruptions. In Kindred, Dana has to deal with the extremes pressures doled out by a white male ancestor—on two sides of time, no less—in order to ensure her own survival and that of her family. In Wild Seed, Anyanwu has to reconcile her literal need for freedom from an immortal spirit-man named Doro, who has a seemingly insatiable desire to control (and consume) others. In one of my favorite texts, Dawn, Butler introduces us to a black female character named Lilith, who survives Earth’s humanicide, is captured by aliens, and placed in an induced sleep state for 250 years by extraterrestrials. Lilith is responsible for awakening a new race of humans in preparation for their return to Earth. Yet her role as an intermediary comes at great cost, as she is expected to reproduce with and be genetically altered by the aliens, which places her on shall we say, uncomfortable terms with her fellow humans. This story has clear connections to that of Henrietta Lacks, the black woman from whom the immortal HeLa cell line used for medical research derives. Thinking about the implications of how black women’s bodies have literally been used to advance humanity is not a comfortable thought, especially when we consider how little credit black women have received. 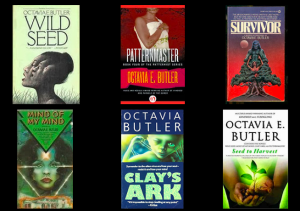 But certainly Butler’s work is not about “credit.” Rather, Butler makes numerous cases—whether explicitly or implicitly—for considering black women’s bodies not merely in terms of their ability to reproduce, to be put on display, or to be fetishized in the popular imaginations, but on their ability to save, to humanize, and to free the oppressed from their physical, cultural, social, psychological, and spiritual bonds. Butler’s writings push us to see black women as whole beings rather than just bodies to be commodified, and in true womanist fashion, reminds us that no complete form of human liberation can occur without the deliverance of black women.

I am ever grateful for—and inspired by—the life and legacy of Octavia E. Butler. I hope that by taking the time to delve into her work that I might also motivate a new generation to think beyond the categorical confines that thwart our collective survival.