In 2016, while campaigning in Miami’s Little Haiti neighborhood, Donald Trump told a group of Haitians that, “We have a lot of common values…whether you vote for me or don’t vote for me, I really want to be your greatest champion, and I will be your champion.” Clearly things have changed.

On November 20th, the Department of Homeland Security announced that the Temporary Protected Status program for nearly 60,000 Haitian immigrants would end, forcing thousands of earthquake victims to leave the U.S. by July 2019 or face deportation.

This would not be the first time that the United States has turned its back on Haitians. Haiti (then known as the French colony Saint-Domingue) declared its independence from France on January 1st, 1804. From 1791 to 1804, enslaved Haitians fought for their liberation from French slave owners. France fought tirelessly to hold on to Haiti as it was their wealthiest colony, exporting indigo, coffee, and sugar. Sparked by a revolt led by an enslaved Haitian named Boukman in 1804, under the leadership of Toussaint L’Ouverture, they succeeded in throwing off their colonial power lead by French military leader and emperor Napoleon Bonaparte. The Haitian Revolution marked a significant event in history.

Upon declaring independence, Haiti claimed a singular place in world history. Haiti became the first modern state to abolish slavery, the first state in the world to be formed from a successful revolt of the lower classes (in this case slaves), the first independent nation in the Caribbean, the first Black republic in the world and the second republic in the Western Hemisphere–only twenty-eight years behind the United States. 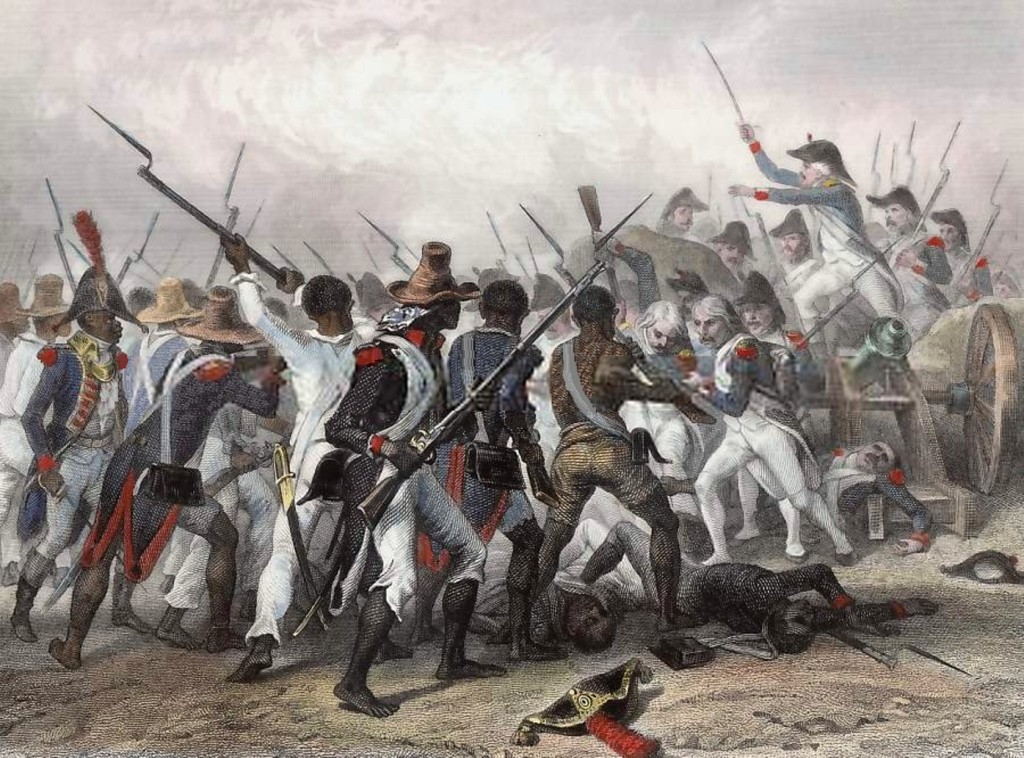 Haiti is literally still paying for securing their freedom, as the French crown extorted 90 million gold francs (the equivalent of $21 billion U.S.) for losses in slaves and property and “illegitimately forced a people who had won their independence in a successful slave revolt, to pay again for their freedom.” One would think that the United States, a nation that profusely propagates and celebrates its narrative of revolution for the sake of freedom would have felt as if Haiti were its brethren nation as securers of liberation and independence. Nothing could be farther from the truth; in fact George Washington’s administration contributed significant funds to assist French planters in their fight against the Black rebels revolting for their freedom. And as Ann Crawford-Roberts of Brown University reminds us:

This would not be the end of the American governments diabolical diplomacy contributing to the determent of the Haitian people. In 1914, President Woodrow Wilson sent the U.S. military in to invade Haiti, executing a devastating and brutal military occupation. The United States occupied and ruled Haiti by force from 1915 to 1934, employing violence to suppress Haitians who opposed their unwanted presence. In one bloody encounter, alone, U.S. troops murdered over 2,000 Haitian protesters.

U.S. interference and influence in Haiti was also apparent in the governments continued support of the Duvalier regime (“Papa Doc” and “Baby Doc”), which ruled Haiti from 1957 to 1986. Fearful that Haiti would fall to communism, the U.S. government concluded that it would offer full support to the Duvalier government. In fact, many American politicians and businessmen saw the Duvalier reign, “as an opportunity to exploit the island nation and turn it into ‘The Taiwan of the Caribbean.’” Given its proximity to the United States, American financial investors, to the detriment of the people of Haiti, convinced the Haitian government to shift its economic focus on manufacturing and export.

The ripple effects of this shift have continued within contemporary relations between Haiti and the United States. In June 2009, the Haitian Parliament unanimously passed a law requiring that the minimum wage be raised to $0.61 an hour, or $5 a day. This pay raise was opposed by both U.S. manufactures, and the U.S. Government, as the “United States aggressively (and successfully) pushed Haiti’s president to lower the minimum wage for garment workers to what factory owners were willing to pay: the equivalent of about $0.31 an hour (or $2.50 per eight-hour day).

Drawing on close to 2,000 classified U.S. diplomatic cables on Haiti released by WikiLeaks–in conjunction with The Nation magazine and the Haitian weekly Haiti Liberté–contractors for Hanes, Fruit of the Loom, and Levi’s worked with the U.S. Embassy as they aggressively moved to block a minimum wage increase for Haitian assembly zone workers–the lowest-paid in the Western hemisphere, making $3.00 per day. To put that into perspective, the average maximum daily wage for prison labor in the United States is $3.45 (and they are by virtue of the 13th Amendment to the U.S. Constitution a slave labor force).

In 2011, U.S. President Bill Clinton–who was then a part of the UN’s Special Envoy to Haiti–publicly admitted making a “devil’s bargain on rice.” Clinton’s devilish deal took place in 1995 when Clinton flexed his presidential power by forcing Haiti to drop tariffs on rice imported from the United States. Haiti dropped its import tariffs on rice from 50% to 3%. The United States then began dumping cheap, taxpayer-subsidized surplus rice (most of which was coming from Clinton’s home state of Arkansas) on the Haitian market, undercutting and effectively destroying Haitian rice farming. A country that was largely self-sufficient in this staple in the 1980s was importing 80 percent of its rice by 2012.

Trump’s plan to end the Temporary Protected Status program for nearly 60,000 Haitian immigrants is not a new form of evil. To the contrary, it represents a continuance of U.S. policies concerning Haiti and Haitians. These policies have made life a living hell for the descendants of those who fought for Haiti’s independence from enslavement, and insisted on being treated as equals on a global stage.

Ameer Hasan Loggins is a PhD Candidate in African Diaspora Studies at UC Berkeley. His research explores Reality Television as a social phenomena, and its effects on the perception of African Americans outside of a televisual space. Follow him on Twitter @LeftSentThis.

Comments on “The Historical Hatred of Haiti”